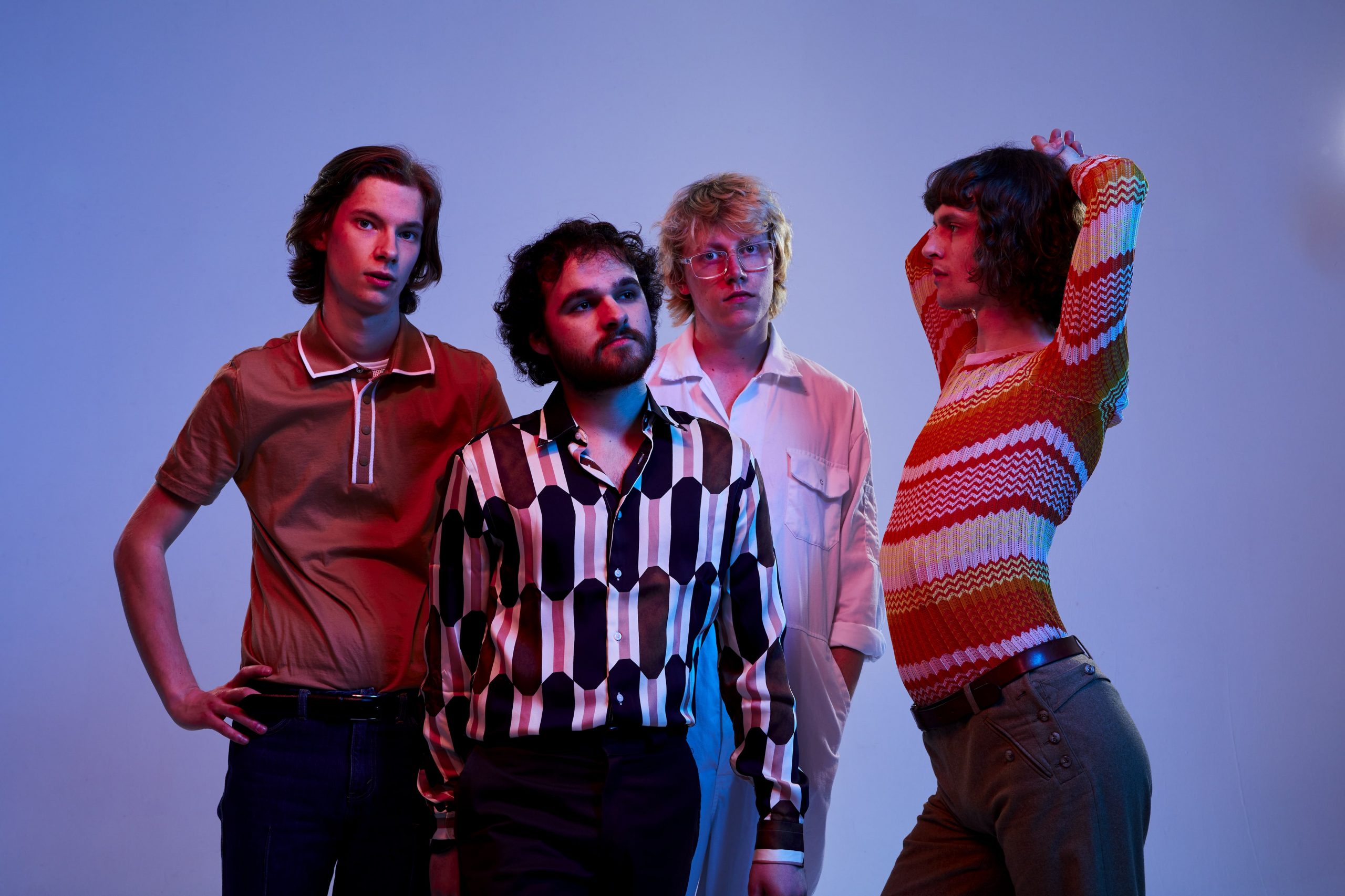 Listening to the new album by Cardiff four-piece Buzzard Buzzard Buzzard made me think about the concept of the guilty pleasure and how a song, a band or a sound can make the sudden leap from ironic nostalgia to something relevant and vital. These cycles come and go, the old gets made new then grows old again, buffeted by whatever recontextualisation the current culture demands. Though creativity will always do its own thing, it’s exhilarating to be on the crest of a wave. And I wonder if I’m listening to the sound of the swell of such a wave.

Backhand Deals, out on 23rd February is bold in its reworking of an era of rock that has perhaps never been this closely referenced since its original incarnation. The songs are intricately crafted in the vein of 1970s pop rock, filtered through a rose-tinted britpop lens. They evoke a glam universe where ‘take it away, everybody, let’s rock!’ – as BBB exclaim on the song New Age Millennial Magic – is an earnest, even profound statement. And with the recent memories of lockdown and still-lingering covid restrictions, the idea of coming together, partying, rocking out has a certain emotional weight, and feels somehow right again.

BBB wear their influences on their sleeves, to the extent that they have a song called John Lennon is My Jesus Christ, which lists the alternate gods they worship. Along with winks in the direction of other bands like Queen, T Rex, and Electric Light Orchestra, their music is refreshingly playful, full of cheeky 7th chords, minor shifts and bubbly McCartney bass. Building a strong following since their conception in 2017 and earning support slots for prestige acts like Noel Gallagher’s High Flying Birds and the Stereophonics, the band are on the brink of the mainstream. I spoke to guitarist, singer and the group’s main songwriter, Tom Rees about the album and how he’s learning to navigate his way through the music industry. 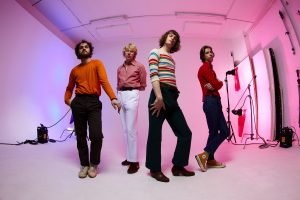 Your first album is on the verge of release; how long did it take to write and record? What was the process?

I think we started it in late 2019. We had a bunch of songs together, maybe 16 songs, and we brought them to Communion [Records] in early 2020 and got it together. We were like, ‘oh cool. this is our album,’ and then after listening to it, we realised it wasn’t really doing it in the way that we thought it would. Because we’ve got our own studio, if we have an idea then we’ll just record it then and there, which is a great way of working for a number of reasons, but it doesn’t work when you’re trying to make a cohesive piece of work. So in January or February 2020, I got into our studio and had the month to myself to write, and I collated another collection of maybe 16 or 17 songs that were much more cohesive and thematically consistent. It felt more like an album. We were going to record them in March, but I think it was going to be the week after the lockdown was announced, so we had to take five and we recorded in summertime 2020 when everything opened back up a little bit again. 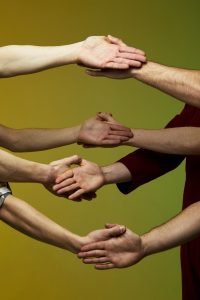 As the main songwriter, do you write the songs alone and then bring them to the band to finish off?

Absolutely, yeah, kind of in a real Stalinist way: ‘if you oppose me you’ll become a non-person’… I’m not advocating for Stalinism in the wider purview of our existence, but it seems to work in a musical sense. It’s a shame Stalin wasn’t in a band – that’s all I’m saying!

Your brother Eddie plays bass in the band; does he always have your back or is he the first one to bring up the criticisms that no one else wants to voice?

To be fair, there are very few criticisms and I think we have it pretty easy going. I think we perhaps don’t appreciate sometimes how easy-going we have it. Maybe it’s just because I rule with such an iron fist that dissent is not even an option! But yeah, it all feels pretty good, so there’s never really an opportunity where he has to have my back, which is a great situation to be in, really. 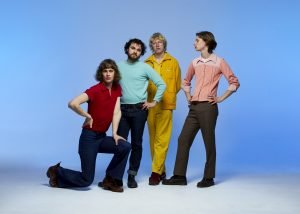 We have such a deep understanding of one another that there’s no awkwardness in the process of working together, which I really like, because a lot of the times in other bands, when you try to assemble personnel for a band on the basis of what they can play and how well they can play, you tend to overlook a lot of the personal factors that are involved in actually being in a band. So it’s quite nice being with somebody who you’re super close to. It means there’s none of that personal stuff that gets in the way.

You have a big tour coming up in March and April; is it going to be cathartic to get out on the road?

It’s our first headline tour, so for sure, but we’ve been playing a lot so we’ve still managed throughout the pandemic to get our fair share of gigs. We were on a support tour as soon as stuff opened back up. It was with a band called The Blinders… I think ‘cathartic’ is the right word to use. Because you spend a lot of your time trying to get on a label so you can work as a musician, but there are a lot of conditions to that and there are a lot of things that rely on you remaining on that label. One of those is selling out a tour and doing a good tour, so I think once we’re on it, I’ll be a happy man. But in the run-up, I’m just very panicky about tickets and that sort of thing. I think being a musician and being creative generally involves balancing emotions of deep anxiety and deep excitement. I think sometimes you can confuse them as the same emotion, so I’d say I am in equal parts anxious and excited. 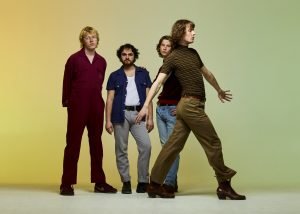 Yeah, I like to stay optimistically pessimistic, positively pessimistic about the whole thing. I think generally speaking my rule when it comes to the music industry is if you’re a pessimist about everything then everything, any minor detail, is a surprise and it makes you feel good about stuff, because there’s so much that gets talked about. There are label executives, who say, ‘oh, you know, when you play your first TV appearance in America,’ and stuff like that, and you have to just be like, ‘yeah, that’s not gonna happen, none of it is gonna happen.’ So I think that’s the perspective more than anything – to be cautiously optimistic is the vibe for sure.

I’ve just been in bands before that have had so much promise to us and then nothing delivered, which is not really the fault of the industry, it’s almost the fault of the artist in believing them… I feel like you have to have a sense of disbelief about you and constantly take everything with a pinch of salt.

Did those previous bands have a similar kind of style?

No, I was in a band called ‘Tibet’, which was kind of landfill indie, which was fine, and then I was in a band when I was much younger that didn’t really do anything, but we were called ‘Howl’ and it became a metal band really. I mean the Tibet thing was really my first step into the music industry, because we had some minor success. It was just about finding my sea legs on the music industry ship. So it was a great experience to learn about how to be cautiously optimistic. 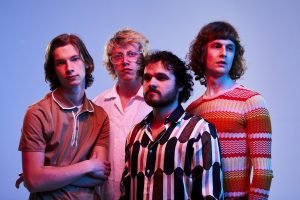 Was the shift to 70s-inspired rock music a conscious decision or did it happen organically?

I think more than anything I was making the conscious decision to make the music that I was making when I was in my last band. When I was making indie music, I was thinking way too much about the music. A lot of the stuff I was writing was just shit indie music. I was writing about loves I’d never had, weird shit, women that I didn’t know, emotions I’d never had, and so the decision to start this band was from a really honest perspective of ‘I just want to write music that I enjoy’ and ‘I just want to rip off songs that I love’. And that’s been the vibe ever since. 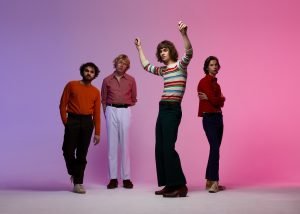 So you’re very self-aware of borrowing from other bands?

Oh yeah, for sure. I’m not entirely sure music ever comes from that ultra inspired place where somebody just touches the keys and this thing comes out that is completely unique. I feel like there’s another music industry thing where people don’t admit they’re ripping stuff off all the time. I think ripping stuff off is completely fine, because you’re still injecting it with your own level of personality. If I tried to write a jazz song, it would be totally fine for me to be ripping off jazz songs, but it wouldn’t be jazz because I don’t know how to perform in that way or write in that way. I think people don’t really admit that enough. I think it’s kind of a taboo thing to be like, ‘oh, I ripped this off,’ or ‘I just love this so I was just doing this.’ You need to sell a lie that you’re this completely unique person when in actual fact, especially in rock music, there’s nothing unique anymore. Which is totally fine. We all just like rock music. It’s about having a good time. It’s not about creating something that’s so completely unique that people have to reassess their lives creatively.

I feel like the only place where unique music actually exists at the moment is in the grime and rap scene, the drill scene, within communities that are actually disproportionately affected by political decisions and the socio-economic direction of the country. They’re forced into situations where they have to be creatively individualistic. But rock music is a very middle class kind of pastime. Or has become so maybe since the death of the 90s. I think Oasis were probably the last band who were a proper working class rock band, who really spoke for people up north.