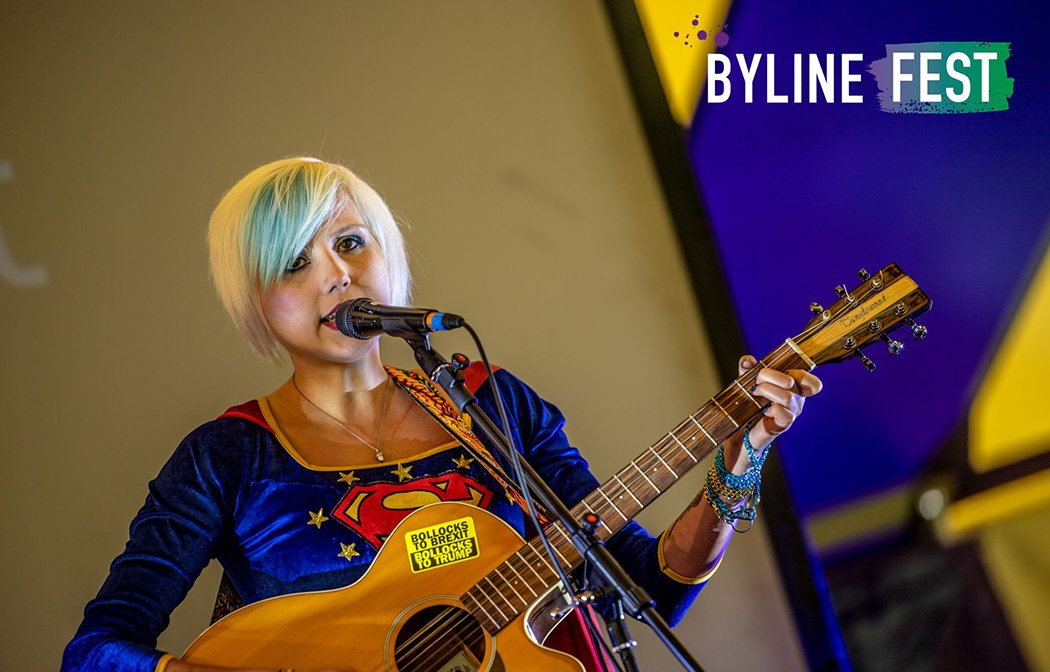 Byline Festival may have only just celebrated its second birthday, but it was bound to be bigger and better than its inaugural year.

Taking place over bank holiday weekend this year, it made use of a typical high-low mix; from talks about the refugee crisis to panels looking at Islamaphobia, to workshops about drumming and how to riot (yes, really) there was something for everyone.

Byline Media as an organisation is also known for not shying away from stories that other news organisation wish not to touch; this was reflected by a “Brexit barometer”, a fiercely passionate defense of Leveson 2 by Professor Brian Cathcart, and a workshop all about blagging. (A practice, in the most basic sense, of someone impersonating you, in order to garner personal data, such as hospital records.)

A personal highlight of mine was The Bad Press Awards; tongue-in-cheek awards are given to newspapers in different categories, including Most Obvious Sponsered Content, Non-Story Of The Year, The Least Accurate Article, The Unicorn Cup (new this year) and Most Misleading Headline. Whistleblower John Ford also made an appearance in a brief intermission, to present his own award.

I was also impressed when ‘people watching’ while having breakfast; the festival, once in full swing, buzzes with activity. The people that attend make it what it is.

Nick Davies, the former correspondent to The Guardian who broke the phone hacking story, and MP Tom Watson were also together on a panel, looking at Monopiles Of Truth. Several rounds of applause were throughout, including when demands were made for a public enquiry into the alleged Russian plot surronding Brexit.

After, I was lucky enough to meet Nick-the journalist I dreamed of being like as a kid.

Despite the rainy weather, spirits throughout were generally at a high level; people were sharing plates of chips under the shelter of Media Planet, or were exchanging stories having ‘met’ on Twitter at the Draught Bar. Business cards changed hands, laughter was shared, and at night, thanks to the trees being lit by lights, it was akin to walking under the stars.

News was also made and broken at this festival; aspiring journalists, keep an eye on Byline’s Twitter accounts. There’s an interesting development that you need to know about, over the coming months.

My only piece of feedback would be that, as an Autistic individual, it could at times be overwhelming; there was so much to see, do. There was a lot of noise, and at times lighting caused me to see spots over my vision, leading to dizziness. This could be rectified by having a kind of sensory ‘time out’ area, away from the noise, the lights, the general hustle and bustle.

But would I go next year? You bet! Just make sure you bring a fully-fledged tent that will keep you dry, and not a flimsy pop-up.

Tickets for Byline Festival 2019 are available now at: www.bylinefestival.com/2019/