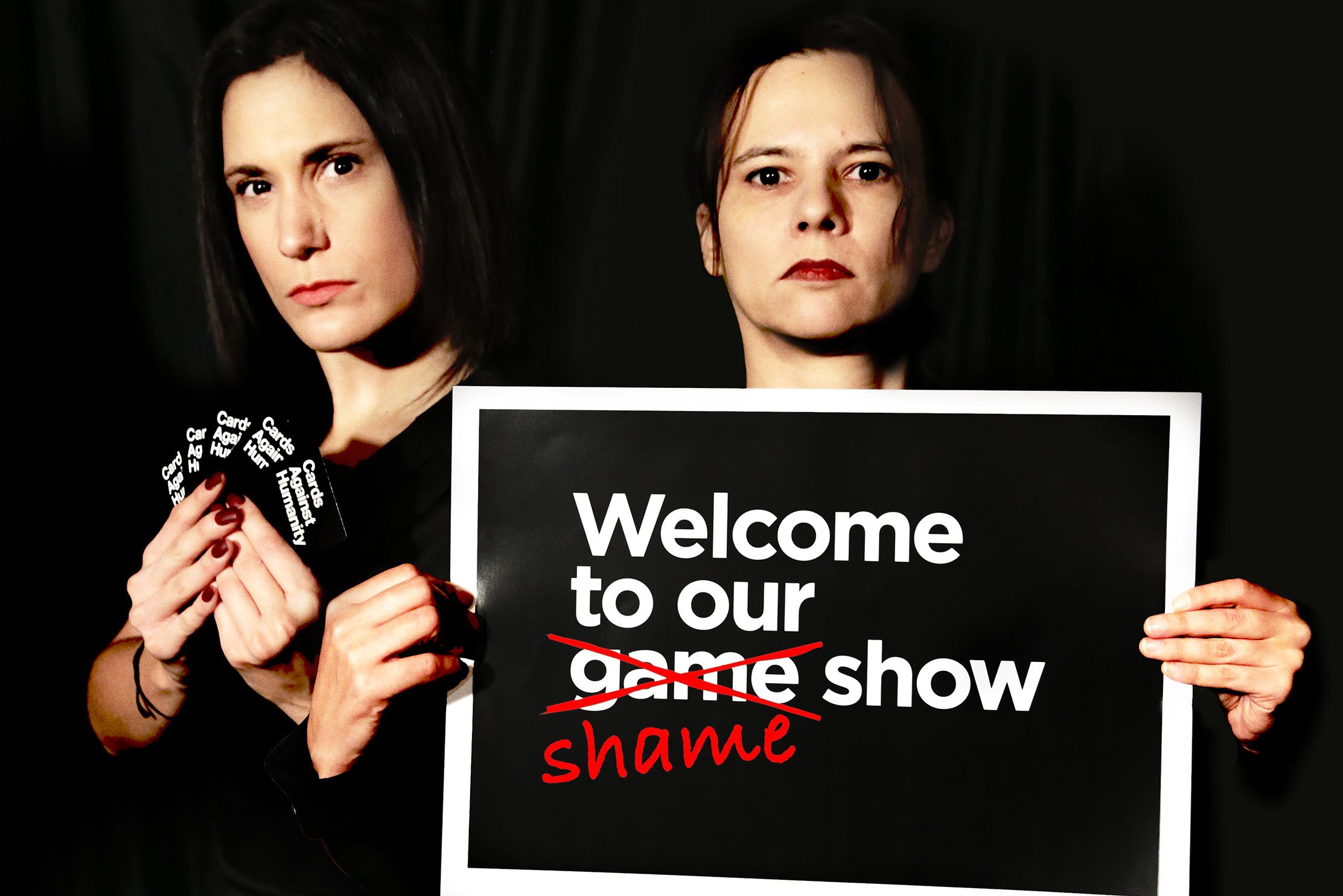 Cards Against Humanity: The Shame Show at Brighton Fringe – review

Back by popular demand after a sold out run at Brighton Fringe 2018, Cards Against Humanity, The Shame Show returned to the city this year.

Based on the popular card game, the show welcomed viewers to take their seats and watch a funny and peculiar game show which entertained, involved and made them feel extraordinarily uncomfortable throughout.

A semi-full house, we were greeted by the view of a convincingly hand-made electric chair, complete with an aluminium head brace. Behind this a projection screen covered the back of a dimly lit stage. More observant viewers may have noticed the large board shaped outline draped in a black blanket on the far side of the stage.

Upon our seats were three game cards giving the promise and for some dread, of audience participation. Two actors entered in black, making the decision to play their roles in an emotionless, unenthused and robotic way that mirrored the game’s dark and not for the fainthearted themes. Let the awkwardness begin.

Round one saw an unwilling audience member called upon to join the un-charismatic cast.

They were placed in an electric chair, insulted, and the audience were asked, using the words written on their cards to fill in the blanks to a scenario read out by our presenter for the evening.

Ok, fine, an amusing and good drinking game, for those people who may need something for their Saturday night gathering.

Higher or lower, the classic from Play your Cards Right was the choice for round two.

Separated into two teams (A and B), a team leader was selected by one of the androids on stage to play.

In similar fashion to round one, we were given a phrase. “What would intrigue and disgust my grandmother?”

Higher or lower, involved cards being turned around to give the worst possible answer. In this case poor, defenceless Sean Penn.

Again funny, and a clever way to incorporate Cards Against Humanity for stage.

The evening went on, each of the five rounds being introduced by a theme song from a classic horror film, think, The Exorcist. T

We were exposed to improvisation from two audience members and in round four, seeing our captive audience member hit with balloon hammers as more scenarios were read out.

The evening was brought to an end suddenly.

The captive audience member was taken to the front of the stage where he was forced to wear a pair of, for lack of a better word, over-worn pants, we were insulted yet again and told to “F*ck off!” before we all took the hint and shuffled towards the exit.

This was an interesting attempt to create a show from a popular game. However, it relied far too heavily on audience anticipation to produce comedy, and struck me as the sort of show that, while at times being creative and clever, could maybe have been done at home with friends after a few drinks, the way the game was intended to be played.