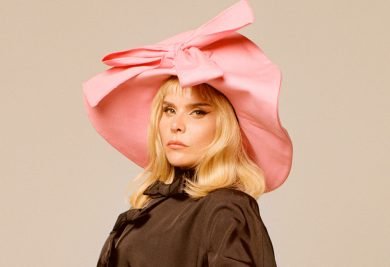 It’s certainly been a memorable year for British pop sensation Paloma Faith. Amidst the Covid chaos, lockdown and the stalling of the country’s live music scene, she’s expecting her second child and has just completed a sparkling fifth album, Infinite Things.

Since her last album, The Architect, topped the charts, Paloma has featured as a coach on ITV’s The Voice Kids and acted in Batman spin-off, Pennyworth. As with most of Britain, she’s had to adapt to a big impact on her life this year. Born from an enforced slowing of her schedule, Infinite Things’ writing and recording also had to adapt to the responsibilities of looking after a three-year-old. If anything, it’s made the album feel even more ambitious and relevant. “We live in a very volatile world that now seems as if we only get one chance”, she says. “So, I have been lucky that I’ve been able to put releases out there and put myself on the map.” This is an album which responds to complex times. Many early contributions have been restructured and set into a compelling narrative addressing creation, loss, change and how we see others, and ourselves.

Recording this self-produced effort in her basement allowed for the creation of something which is inarguably personal. “Well, I think being at home meant I was completely uninhibited with wild abandon, in a way that I am not when sound engineers are looking at me.” What she’s created is a bold collection of material, charting confident new directions, whilst still offering the glistening soul pop and sweeping ballads which make it instantly recognisable as a Paloma Faith work. The stand-out track on Infinite Things is possibly Monster. A slab of enticing dancefloor pop, written with the assistance of hitmaker MNEK, this examination of the music business’ darker side is surely destined to become a live favourite.

The path to pop superstardom has been shaped by her experiences. Working in cabaret and doing a spot of modelling, Faith has an MA in theatre directing and a degree in contemporary dance, all of which shaped her vibrant image. Back in 2009, her expansive debut album, Do You Want the Truth or Something Beautiful?, smashed into the top 10, giving Britain the lively exciting female pop icon it had been lacking for so long.

Her singular ambition to evade the traditional expectations of female performers has allowed a greater freedom of expression. Infinite Things is possibly less fluffy than we’re used to, focussing on motherhood and the accompanying pressures, hopes and expectations. “I wasn’t afraid to make mistakes, and sometimes those mistakes land in places that are wonderful, and I wouldn’t make them if someone else was there. So, I feel like there’s more intimacy in this record, and that there’s more truth in the way that I am singing.” She’s frank about the challenges she faced to bring her daughter into the world, a clearly understandable desire to shield her child from media intrusion. While she’s often maintained a strained relationship with the media, fans remain endeared by her engaging and honest nature.

“It is so great being a mum and I feel very lucky, as the lockdown meant that we’ve spent a lot of time together as a family, which has been a positive. Usually, it had just been one or the other of us looking after our daughter, who has now started really learning about family.” The record’s title track is about her youngster and inspired by Argentinian writer and poet Jorge Luis Borge. His short story, The Aleph, sees its central character experience the full spectrum of human emotion, from pain to joy, within a single moment. In turn, the track swings between disappointment and hope. Drenched in spirituality its stripped back vocals and gently melancholic atmospherics offer easily one of the album’s most intimate and insightful moments. It sees the world through her daughter’s eyes, while exploring the heartache of a parent who wants the best possible future for their child.

The experience of living during the pandemic, seeing the issues faced by different communities and knowing people who have lost loved ones has informed much of the album. “It’s also about enduring love, as we’re most used to hearing about the initial parts of a relationship on that first spark, so it’s an area that’s under-represented. I think there’s a big cultural hole there that I’m aiming to address.”

Across her career, Paloma has been unafraid to tackle difficult subject matter through her music. The album’s lead single, Better Than This, is classic Paloma Faith, combining the whimsical with a powerful reflection on what society is leaving for future generations. The deft lyrical imagery doesn’t ever obstruct her ear for what makes a great record. The glorious power-pop 80s nostalgia of Supernatural, the rapturous gospel chorus of Gold, and the absolute rushes of Beautiful & Damned or Last Night on Earth, mark this as her most diverse and emotionally charged work so far.

Paloma and partner Leyman Lahcine have endured plenty in recent years, including navigating a total of six rounds of IVF. “I’d pretty much resigned myself to giving up with this latest treatment, and I thought that this just wasn’t going to happen. It felt like it was the last chance saloon, and I was thinking to myself: ‘Where am I going with this?’” While there may be challenges ahead, including Paloma revealing she’s prone to postnatal depression, she knows she is coming from a place of resilience and support. “With IVF, I think it’s sad that men don’t really talk about it in public, and it’s one of those things where society always assumes that it is a female issue. It’s something that can be hard on relationships,” she admits, keen to put across the fact that they’ve split their childcare as evenly as possible.

As the year draws to a close, planning for the future is still difficult with a pandemic raging, but she is booked to head out for another UK tour next autumn. It’s something she’s eagerly looking forward to – performing remaining as her grand passion, especially when she has the added bonus of designing her own sets.

Beyond being a double platinum recording artist, mum and actress, Paloma Faith still finds time to devote to her other passions, including being a public face for the climate change and humanitarian response efforts of Oxfam and Greenpeace. “Being an ambassador is fantastic, as I feel like when you’re in my industry, it’s easy to lose sight of the reality about the world. The truth is, there are a lot more pressing things going on out there than singing a pop song, so if I can use my platform for the greater good then I absolutely should and intend to.“