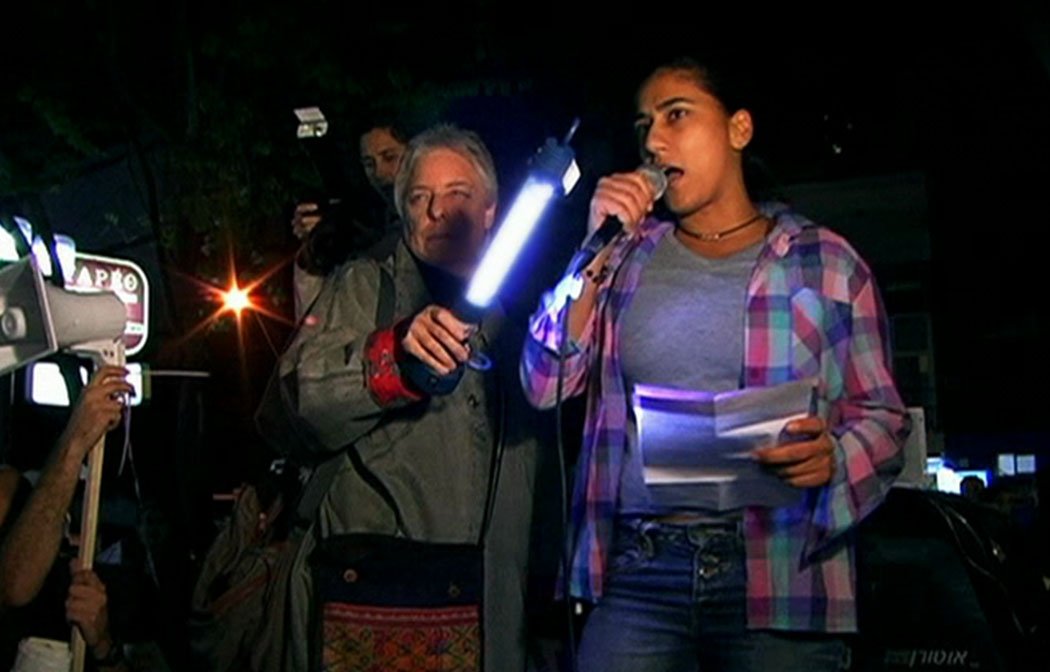 em>City of Borders is a fascinating documentary exploring the intersections of identity and the importance of queer spaces in Jerusalem – one of the most highly-contested areas of land in the World. The film is directed by Yun Suh, a South Korean – American filmmaker whose experiences in her own divided country inspired the making of the film. City of Borders follows the lives of five individuals who all frequent Shushan, which at the time of filming was the only LGBT bar in Jerusalem.
Shushan is described by its patrons as a sanctuary and an oasis in an otherwise highly hostile city, where the only thing that seems to unite the opposing religious ideologies is a disdain for homosexuality.  It is owned by Sa’ar Netanel the first openly gay member of Jerusalem’s city council who opened the venue to provide a safe space for Jerusalem’s LGBT community to freely express themselves. Throughout the film we witness the level of resistance Sa’ar faces including being sent chemical threats in the mail and having his phone number published in ultra-orthodox newspapers which implore their readers to murder him. His resilience in the face of such adversity is impressive but by the end of the film it is clear that constantly fighting for his right to exist and being so publicly visible has taken its toll and leads Sa’ar to leave for Tel Aviv where homosexuality is more tolerated.
Shushan represents more than just an LGBT safe space; it is a place where the complexities of the Arab-Jewish conflict are subordinate to the lived experience of being LGBT in Jerusalem. As such there is largely a level of acceptance and community among the clientele of different religious and secular backgrounds that is contrasted against the physical construction of border walls taking place outside the venue. Seeing Palestinian drag queen Boody endangering his life, by crossing a border to perform at Shushan, highlights both the strength of his will to exist and the ultimate futility of such constructions designed to separate people.

The relationship between Palestinian Israeli Samira and her partner Ravit a Jewish Israeli provides an almost utopian model of queer love that challenges both of the regions biggest taboos around sexuality and religion. We see both Samira and Ravit performing domestic rituals together, rehearsing speech’s against Israeli occupation and attending Shabbat and while there is occasionally tension between the two women it is the practice of offering small concessions towards one another that keeps their relationship strong. This ability to see one another’s shared humanity over political and national identity is touching and significant.
Adam Russo is a young Jewish man in love with Amit, an Arab from Palestine. Adam was stabbed by an ultra orthodox protestor during Jerusalem Pride in 2005 and since then has become a vocal spokesperson for LGBT rights. During the film we see him constructing a house for himself and Amit on disputed occupied territory providing a nexus between the film’s two core subjects of religion and sexuality and the contradictory complexity of the region’s political situation. City of Borders is a film about people’s right to self-determination, their right to exist freely and the need and crucial importance of space in areas. The situation in Jerusalem can at some points in the film seem overwhelmingly bleak but the defiance and dignity displayed by the subjects of the film offers hope.

ABOUT US
BN1 Magazine is the leading source of entertainment and lifestyle news in Brighton & Hove. From comedy and theatre to clubbing, music and festival line-ups, we cover a range of events across Sussex and beyond. We can help you find a fabulous vegetarian restaurant, catch an amazing new band at The Great Escape and see a hypnotising performance at Brighton Fringe. Sometimes all in the same weekend… Whether you’re a student and new in town, trying to pack plenty of family fun into a visit or a local planning a massive night out, we’ll tell you everything you need to know. From pubs and bars to art and shopping, it’s time to kiss those lonely blues away in one of the world’s most interesting cities.
FOLLOW US
© Copyright 2019 BN1 Magazine. All Rights Reserved. >Privacy Policy
MORE STORIES
CHARITY