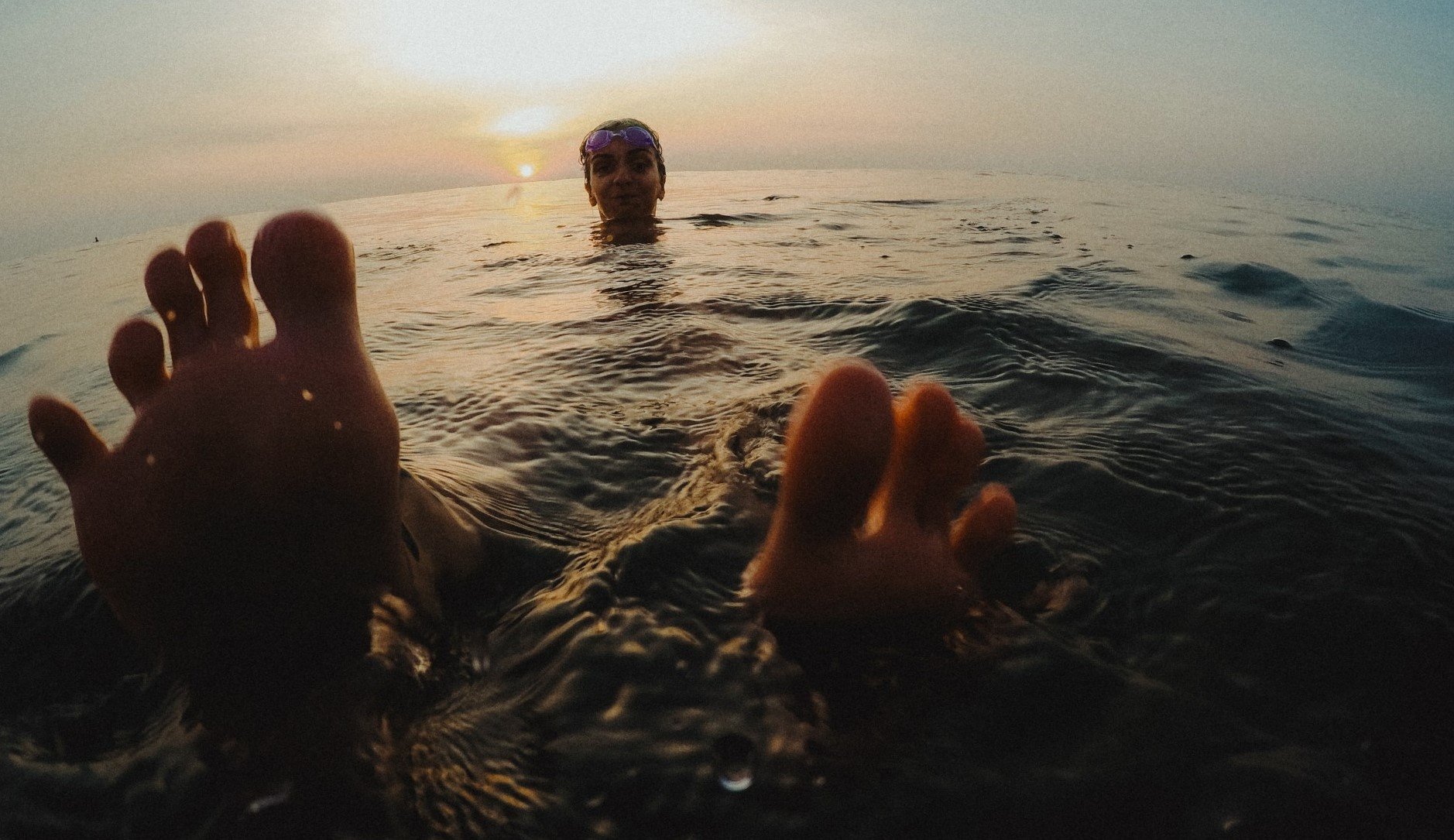 Like so many of life’s great trends, it started with Hoff. But for once I’m not talking about David Hasslefhoff and his ability to popularise inappropriately tight leather trousers, or eating burgers whilst lying drunk on the floor – although Drunk Floor Burgers never really took off in the way he’d imagined. No, this Hoff is actually Hof (Saying Hof(f) too much? Get used to it, there’s more to come): Wim Hof. And the ‘it’ I refer to, isn’t performing dreadful music whilst suspended above the Berlin Wall, rather it is subjecting oneself (voluntarily) to prolonged exposure to cold water or ice.

Known as The Iceman, and often seen immersed up to his neck in ice, you’d be forgiven for dismissing the Dutch 61-year-old as an eccentric ex-resident of Arkham Asylum, trying to nail down the precise nature of his superpower. And, to be fair, you’d not be too far from the truth.

To be clear, Mr Hof, according to my research, was never deemed criminally insane in a fictional Massachusetts city. However, his predilection to be submerged in uncomfortably cold water or ice, it turns out, does bestow upon him (and other gluttons for the same punishment) something as close to a superpower as we can hope to achieve in the real world.

And Hof doesn’t just sit around in the snow wearing only his underpants to look kooky. This cold exposure is one of three ‘pillars’ that make up his Wim Hof Method (WHM), along with mastering breathing techniques and meditation. Practised regularly it is claimed the WHM offers us huge benefits, both physically (from more energy and boosted immune system to lower blood pressure and pain relief) and mentally (including dealing with stress and depression, and increased concentration and happiness).

Essentially an extreme form of yoga (just often practised half naked on a glacier) there is much about the WHM that isn’t new and is already widely espoused: just look at any group of middle-class friends coming out of a coffee shop late on a weekday morning, and you can bet a number of them will have a yoga mat rolled up under their arm, and (let’s be honest) a slightly-too-pleased-with-themselves smile on their face.

Whilst the breathing techniques and meditation have been widely practised for some time, exposure to the cold has taken longer to garner the same level of popularity (although ice baths have been used by professional athletes to speed up recovery for some time). It is now, however, hot on the heels of its yogic compatriots, with open water and cold-water swimming seeing a huge increase in popularity over the last couple of years. Research carried out by Sport England in the rose-tinted pre-pandemic bliss of 2019 found that 4.1 million people had swum in lakes, lochs, rivers and seas, between November 2017 and November 2018. It is thought that after a year dominated by lockdowns and the associated stresses and strains on our mental wellbeing and emotional fortitude, that this number will now have risen even further.

So, what are the benefits of swimming in unpleasantly cold water?

Boosts the immune system
If ever we needed to increase the ability of our bodies to fight disease, now is the time. And cold-water swimming can help that as exposure to the cold water increases our body’s white blood cell count. And these white blood cells, or leukocytes, are what protect us from infectious disease and foreign invaders: very much the Dad’s Army of our epidemiological arsenal. And regular exposure to cold water can help promote our Private Pikes and Captain Mainwarings to Conan the Barbarian and Xena Warrior Princess.

Gives a natural high
Swimming in cold water is both exercise and very nearly painful, in a laugh-through-the-pain-otherwise-I’ll-cry sort of way, at least until we can control our breathing and realise our body has acclimatised somewhat. Both these elements (exercise and pain) release endorphins to help us cope. So, as long as we don’t stay in too long and go from near to the pain barrier, crashing through into agony, the endorphins released by being in the water will make us feel great for anywhere from minutes to hours afterwards.

It increases your libido
As an international playboy and world class love-machine, I need no improvement in this area (hmm, I wonder why my partner’s sniggering and handing me my swimming trunks…?), but it turns out that, contrary to popular belief, cold water is not the dampener of lust that we all associate with a cold shower, after all. Quite the opposite; it boosts oestrogen and testosterone levels enhancing fertility, and increases our libido which, in turn, is associated with improved confidence and mood.

Reduces stress
Evidence suggests that repeated exposure to cold water can reduce stress levels, leaving us feeling calmer and more relaxed. It is thought that with each immersion the body gradually reduces the severity of the initial stress reaction, and that this can be extrapolated to other stressful situations, enabling us to cope with them better.

Burns loads of calories
When we’re in cold water, it’s naturally harder to keep all our bits warm. The body has to work harder, and the heart has to pump faster, using up more calories. We also shiver, secreting the hormone irisin which induces energy-storing white fat cells to act like brown fat cells, burning energy (and calories) by generating heat. A cold swim also increases your basal metabolic rate, so you continue to burn off more calories afterwards. In other words, one dip in the sea and sit back ‘til we’re ripped!*
*= There’s a chance it doesn’t work like that.

Reduces inflammation which could help alleviate depression
Inflammation is the protective response of our immune system, and is healthy when these stressful events are few and far between. But if we experience stress every day, this can quickly turn into chronic inflammation. And it doesn’t matter what it is, whenever there’s ‘chronic’ in the title, you know it’s bad. (Just look at The Chronicles of Riddick!) Chronic inflammation has been linked with depression and anti-inflammatory medication has been found to help reduce the symptoms of depression. It is therefore suggested that, with its ability to reduce inflammation, cold-water swimming may well decrease our risk of depression.

Reduces chance of dementia
One of the more high-profile studies that has helped nudge the sport into the public’s consciousness was carried out by Professor Giovanna Malucci and her team at the University of Cambridge’s UK Dementia Research Institute. As described when reported on the BBC, their research led to the discovery of a ‘cold-shock’ protein in the blood of regular swimmers in cold water. This protein has been shown to slow the onset of dementia in mice, even repairing some of the damage it’s caused.

These are some of the numerous purported benefits of voluntarily making the conscious decision to take off nice warm clothes and tiptoe into icy cold water, that also include improved circulation, better quality of sleep and higher energy levels, among others. And of course, temperature aside, with swimming pools closed and options to exercise limited to running or watching Joe Wicks, open water swimming offers a free alternative. Furthermore, it simultaneously enables you to connect with nature, which, according to Kaplan’s Attention Restoration Theory helps reset the mind, improve concentration and reduce fatigue and stress.

As with so many trends, the science and reasoning eventually take a back seat, and the craze itself becomes its own whirlwind of hype and self-promotion, proliferated through evermore hyperbolic claims on social media, the inevitable influx of self-proclaimed influencers, leaping at the chance of a different venue to pout in, before finally the craze reaches a popularity saturation point when celebrities start jumping on the bandwagon and making a hoo-ha about it. Step forward Ed Sheeran, the Beckhams and Prue Leith who are amongst the new exponents well-heeled enough to remove the need to venture into nature or anywhere public, and instead bring the mountain to Mohammed, employing landscape gardeners to build lakes in their grounds so they can ‘wild’ swim in the manmade comfort of their own backyard.

But cynicism (and downright jealousy) aside, this is surely an indicator of how popular this new craze has become. As is the emergence of its own accessories market, from neoprene shoes and gloves, to the increasingly omnipresent Dryrobe to don afterwards. Essentially a loose jacket with towel inside (which manufacturers seem to think justifies a price tag north of £150) this feels very much the equivalent of the yoga mat, in that much like a rolled-up yoga mat isn’t always as recently used as its carrier would have us believe, the jackets are often worn by the well-to-do as a not-necessarily-earned badge of honour. In other words, cold-water swimming has officially transcended health benefits, and become a fashion statement.

Often, when celebrities and fashionistas arrive on the scene, that scene is ruined, the bubble burst. But, as someone who had never tried this, I was anxious to see what the fuss was about before the waters looked like they do on Christmas Day during Brighton’s Santa-swim, and took both a literal and metaphorical plunge off Brighton beach, into the biting waves of the English Chanel. And my honed reporter’s eye was able to glean the following from such thorough investigative journalism: it was shitting cold.