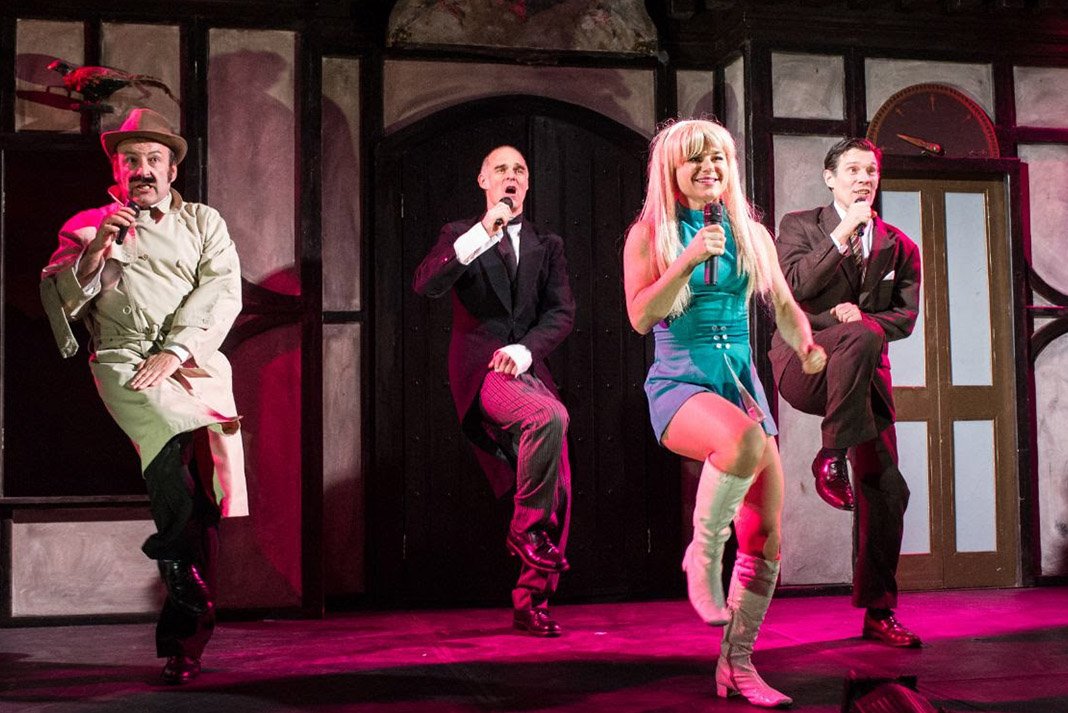 Described as “A glorious bunch of idiots who like to make seriously ridiculous theatre” – artistic directors from Spymonkey Toby Park, Petra Massey, Aitor Basauri and associate artist Stephan Kreiss give us some details into celebrating their 20th anniversary with the remount of their sublime comedy Cooped which touring the UK and US in 2019.

Based in Brighton, the internationally-acclaimed Spymonkey are firm local favourites. So, it’s fitting the tour opens at Pavilion Theatre, Worthing, as part of Brigfhton festival in May. They then head off to Liverpool and Blackpool in June and then an extended off Broadway run, in Florida, for autumn 2019.

First created in 2001 and performied for the first time in the UK since 2013, Cooped comes across as Hitchcock’s Rebecca meets The Pink Panther, Spymonkey’s deliciously demented take on the pulp gothic romance overflows with brilliant characters, rip- roaring farce and virtuoso physical comedy. Aitor says it feels nostalgic after not performing the show for so long. “The shows that you have not done for a while when you go back to them, they fell like and old place that you have not visited in a long time. It feels familiar but you do not know why?”

Petra says that the way the humour of Cooped depends on the person. “If [the audience] like this kind of thing then they may snort, wet themselves and at times be moved. If they don’t then they will sit with a lemon face and say idiots under their breath a lot. And that would be right.”

A spooky mansion, a plucky young heroine and a ‘handsome’ English aristocrat. Add a German butler and a Spanish soap star and you’re cooped with Spymonkey! Stephan says “Spymonkey is a highly precise and accurate depiction of what Europe seems to feel like at the moment. Two European countries, Spain and Germany, represented by – two idiots! The UK – represented by two idiots! We have shown to each other on numerous occasions that we are idiots and therefore get along pretty well these past two decades. The world would perhaps be a nicer place if people would admit to their foolishness.”

Spymonkey fans and first-time audiences alike will enjoy the laugh-out-loud humour of Cooped, with new bits especially created for this anniversary tour. On the success of the show, Toby believes it is because “it is the purest piece of silliness we have ever made, just so much joy on one stage. It is so brimming with ideas and treats for the audience, like a magic box that keeps revealing new surprises.”

Gregory Alan Isakov to support Passenger at the Dome

With their dark, edgy physical comedy rooted ‘somewhere between Monty Python, the Marx Brothers and Samuel Beckett’, and a quartet of performers from Spain, Germany and England, Spymonkey have proved to be a truly international phenomenon, enjoyed by and accessible to a wide range of international audiences. They have created nine shows to date; Stiff, Cooped, Zumanity – Another Side of Cirque du Soleil, Bless, Moby Dick, Love In, Oedipussy, The Complete Deaths and most recently their critically acclaimed adaptation of A Christmas Carol for Liverpool Playhouse.

Programmed by Worthing Theatres in partnership with Brighton Festival, Cooped will be performed at the Pavilion Theatre, Worthing from Weds 22 – Sun 26 May.