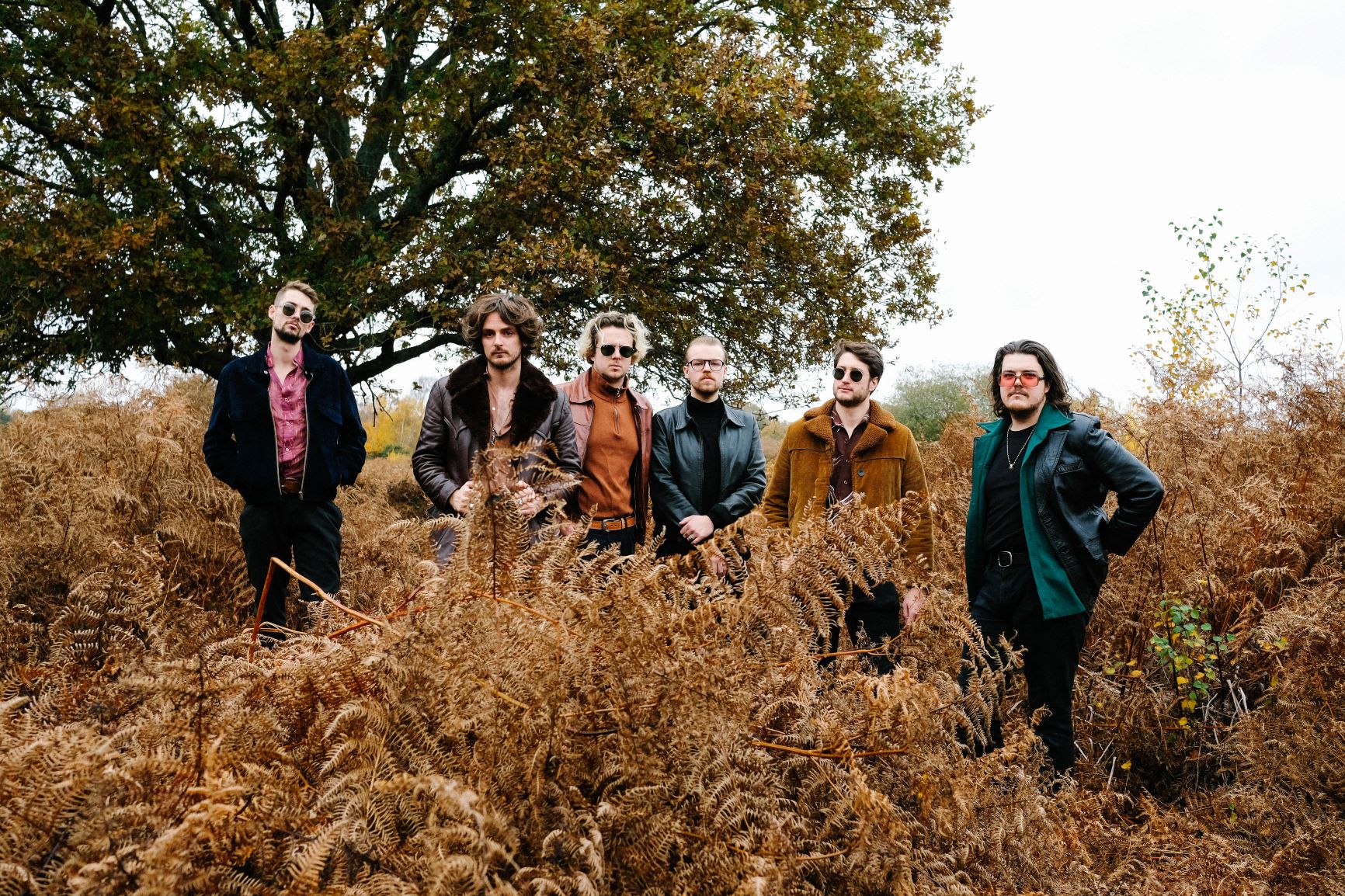 For those of you who haven’t listened to Creeping Jean’s music, from the band name alone you could be forgiven for imagining a sound that is quietly tiptoeing out of the shadows. You’d be wrong. With soaring melodies counterbalancing guitar riffs like chainsaws, this band isn’t creeping from the darkness, it’s sprinting towards the light.

With the group’s songs being played on stations such as Radio One, 6 Music and Radio X, the band are gaining both momentum and acclaim. Having just finished their first record, Desert Sauce, BN1 spoke to the group’s founding member, Oliver Tooze, about their musical influences, how lockdown affected the recording process, and what fans can look forward to from their debut album.

How would you describe the band’s sound?

We like to think of our music as a nod to the late 60’s and 70’s, hijacked by the modern sounds that truly made an impact on us. Our aim is to distil the elements we love from bands such as Led Zeppelin, The Doors and Marc Bolan, and build upon that with more contemporary influences such as Jack White, The Black Keys and Rival Sons.

Delivering a story-driven element has also been a mainstay of our song-writing process. As fans of Creedence Clearwater Revival and Bob Dylan, it’s not lost on us that songs that take you on a journey really resonate with listeners. So, lyrically, we always try to create a world people can connect with – even if it’s just for three minutes.

What about your band’s style? What’s the story there?

I’ve always been enamoured with the 60s and 70s, especially the music and fashion. Around March, 2018 my partner Sara and I opened a shop in the North Laines called Waiste Vintage. It was a real passion project and incorporates our love of fashion and fortunately, we seemed to find a niche in the market. It wasn’t too long after the shop opened that I formed Creeping Jean with some musician friends. Our style was already our style and I think it suits our music down to the ground. The only annoying thing is that with every photoshoot opportunity I know our band members will be scanning through the rails for outfits and then asking for a discount!

How did the pandemic impact you as a band?

We’ve been gaining real momentum over the past couple of years. But having gigs taken off the table was a real blow to us because a lot of our fanbase was built up by word of mouth from live shows. 2020 has been a struggle, and between the six band members adjusting to working from home/being out of work and feeling a little trapped, there has been way more stress than we’re used to. However, the support we have received from our friends, fans and family, as well as each other, has made sure we’re being looked after. We’re probably closer as a band now than before the pandemic.

When was your last gig?

Our last gig was in February 2020 supporting Temples for their sold-out show at The Leadmill, Sheffield. Our last Brighton gig, was a headline show at The Green Door Store in December 2019 which we sold out. Some of our best shows in Brighton have been at that venue and we’re looking forward to performing there again. With our new album on the horizon, we’re excited at playing a brand-new set. Patterns will be our next big Brighton show, but due to the current situation it’s been delayed numerous times. At the moment, it’s looking like it’ll be towards the end of the year or even into 2022.

How did you spend your time in 2020 without gigging?

Like everyone, we responded to 2020 by learning the new rules and playing the hand we were dealt. But rather than sitting around trying to predict the unpredictable, we got activated and started video calling each other to work out what we could do to continue the growth of the band. We had some decent success with online content for social media; videos of us all playing covers separately from our own homes and editing it together. Our cover of Mr Blue Sky by ELO did especially well over the summer and we’re really proud of that one. We’ve also been focussing on getting our songs on loads of Spotify playlists and growing our Instagram profile.

Ultimately, our biggest decision was to record an album. This was in March, 2020. A good friend of ours is a solid producer and recording technician (Dan Crook at Agriculture Audio). We researched studios where we could record, and we eventually settled on Echo Zoo in Eastbourne. I had written around 40 songs, and there were only a couple of which that have ever been played live before. We assembled a list of demos and worked together to pick the 13 songs for the album.

How were you able to go from lockdown to recording the album?

Raising money for our first album was not a straightforward task. When the first lockdown began to ease up and places were opening again, we had the idea of buying loads of vintage Converse shoes and selling them on though the shop. We must have bought and sold over 5,000 pairs of shoes in 2020! We were spending all our free time pairing them up, organising them into sizes and going to car boot sales every weekend. It was a busy summer! When we went back into lockdown, we had to shake things up yet again; videoing all of our stock, selling them wholesale and even listing them individually online. Put it this way, once the current lockdown is over, if you need a pair of Converse, I’m pretty sure we’ve got your size!

So how did recording the album go?

Once December finally arrived, we basically lived at the studio for two weeks and made the most of every minute! Our days were spent laying down the tracks and knocking back coffees, and the evenings were spent competing on the PS4 and cooking our favourite meals for each other.

From recording the first guide track to singing the final harmony, there was an underlying electricity that told us we were really on to something. Our engineer and producer, Dan, managed to pull off the almost insurmountable task of creating something that makes the band sound like a completely cohesive unit while still capturing everyone’s individuality. By tailoring his approach to each band member, he made sure he understood us and got the best out us. Considering how 2020 panned out, those two weeks of freedom in December won’t be forgotten any time soon.

When can fans expect the new album?

All the recording is completely finished. We have a handful of tracks which will be prioritised as singles released throughout the year, and the rest of the album will follow. We’re seriously hyped to release it and can’t wait for our fans to hear the new songs at our Patterns gig in Brighton. Like most musicians right now, we’re just really itching to get out there and play.