Work has begun at Edward Street Quarter, the £120m redevelopment of the ex-AMEX House site, owned by property developer First Base in partnership with Patron Capital. McLaren Construction has been appointed as lead contractor with a target of completion by autumn 2021.

McLaren has begun construction work in earnest this month, pouring the concrete for the foundations and basement floor. Nick Hibberd, Executive Director, Economy, Environment & Culture at Brighton & Hove City Council and local stakeholders also got stuck in to help kick off the construction. 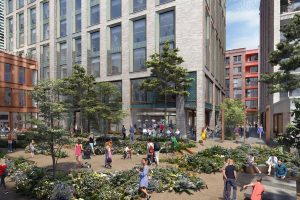 With 110,000ft2 of Grade A office space, 168 new apartments, 39,000 sq ft of retail, food and beverage and leisure units, the development is the largest of its kind to come to Brighton in over 25 years.

Steve Eccles, Project Director at First Base, commented: “Starting on site at Edward Street Quarter is a significant milestone as we move forward the delivery of Brighton’s largest speculative office scheme for over two decades. The growth of the tech, media and creative sectors in Brighton has been frustrated by a lack of suitable workspace, so we anticipate strong demand for the commercial element, which will sit within a vibrant new neighbourhood in the city centre.” 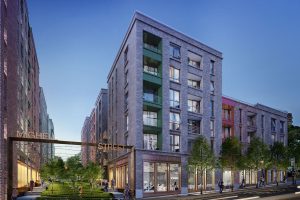 Kevin Cooke, Senior Partner – Development at Patron Capital, said: “Following significant planning, it’s exciting to see construction work starting for this major scheme. With its exceptional design, attractive city-centre location and mix of uses, we look forward to this being a highly successful development in all senses.”

High-end commercial office space is in high demand in Brighton, as Director of the Chamber of Commerce, Sarah Springford, recently testified: “We know from talking to our members that high-end office space is something this city is currently seriously lacking. Developments like Edward Street Quarter will help Brighton prosper and help our burgeoning creative and tech businesses stay local, growing within what is fast becoming recognised as the UK’s Silicon Beach.” 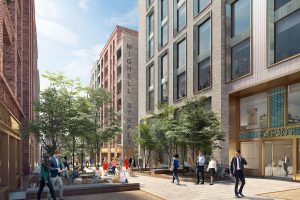 Mixed-use developer First Base and Patron Capital received planning consent for the £100 million redevelopment of the former AMEX House in Brighton in July 2018. Brighton & Hove City Council has approved plans for a new mixed-use scheme that will deliver 160,000 sq ft of Grade A offices alongside space for independent coffees shops and restaurants, bringing over 2000 jobs into the city. Edward Street Quarter will also deliver 168 new homes, comprising a mix of private and affordable units to help meet local demand. The scheme, designed by BuckleyGreyYeoman, is inspired by Brighton’s eclectic street scene and will introduce 130 new trees and 45 plant species in three new public spaces created by renowned landscape designers Spacehub. First Base and Patron Capital acquired the former Amex House site in 2017 and have developed the plans following consultation with local residents, businesses, community representatives and Brighton and Hove City Council officers.
www.edwardstreetquarter.com

Once again, this year our city will stand together for Trans Day of Remembrance today (Fri 20 Nov). Trans...