Every Announcement From The PS5 Launch Event

by Mason Meyers
in GAMES
0

Even in 2020 where the debates about which console is better have been quashed, new console launch events are arguably the most important way for console companies to get a foot up over their rival, in Sony’s case the Xbox Series X.

These events are made for the companies to announce the very best games they have in store for audiences to play, and most importantly to announce the date of release and the price consumers around the world will pay on that day.

This year Sony had some big announcements. So here is a comprehensive list of every announcement Sony made, no matter how big or small.

The Price and Release Date

It seems like in recent months Sony and Microsoft have been stuck in a stalemate in the cold war that is releasing the pricing for their consoles, neither party keen to show their hand first.

Consoles are not a cheap thing for a consumer to buy, and often being the more expensive in the new console generation will set you back for quite a while in the sales war.

However, with Microsoft releasing the prices of the two new Xbox series X’s, Sony were finally able to give the gaming community the news they were anxiously waiting for.

This year Sony will release two new Playstation’s, one with a disk drive, and one digital-only version for a cheaper price. Both consoles will be released in the UK on November 19th, with the disk version costing £499.99, and the digital costing £359.99 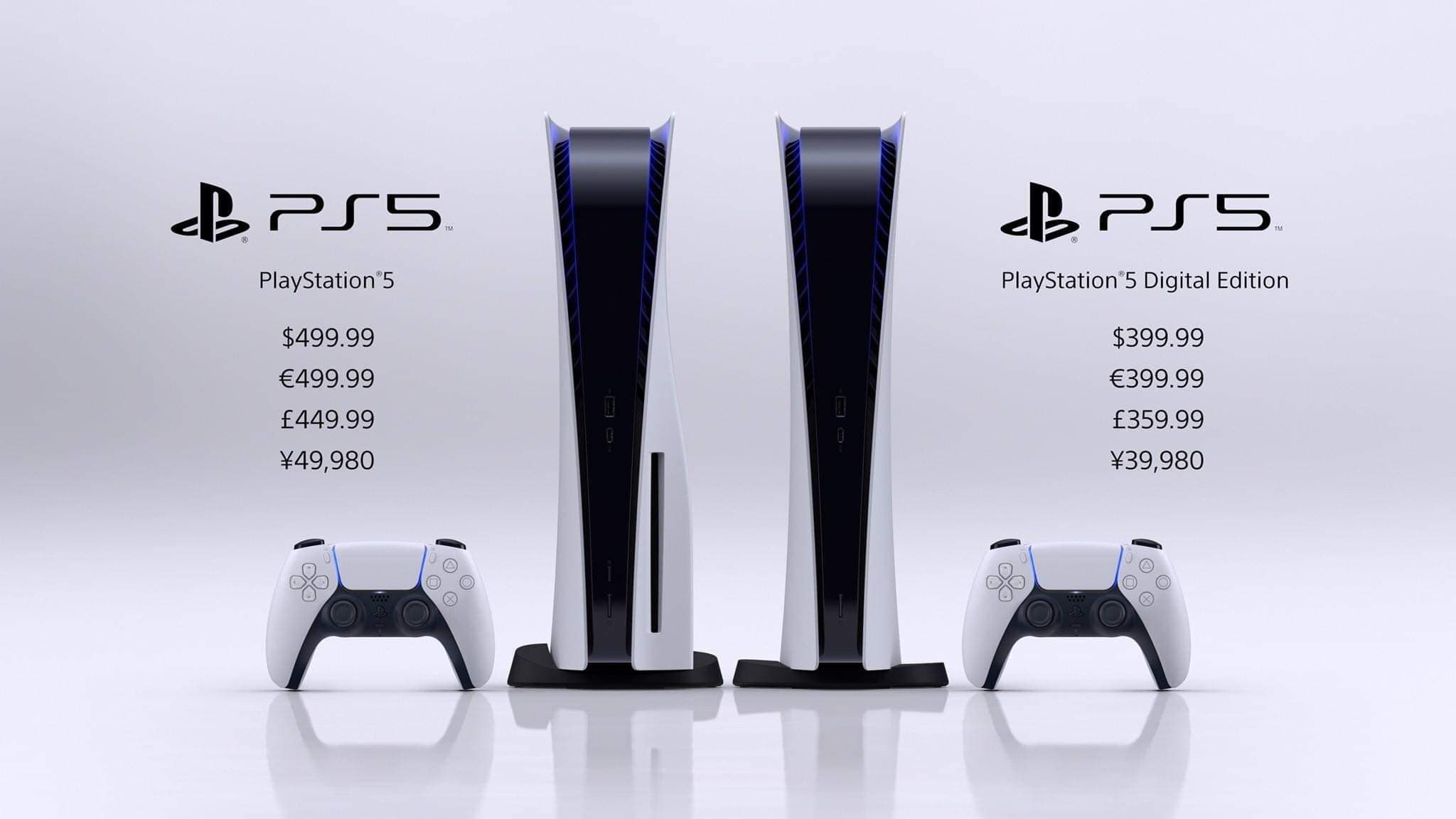 Very few JRPG’s are quite as well known and as successful as the final fantasy series, and with fans waiting four years without any word of a sequel to 2016’s critically acclaimed Final Fantasy 15 fans were itching for an announcement of a new game. However, with the very first trailer from Sony’s PS5 event, fans of the complicated series were greeted with a flashy gameplay trailer for the latest in the series.

This is definitely one worth checking out for anyone who loves anything Japanese, complex, or just great in general.

The trailers have played, the price and date have been revealed, the screen is black, that must be it for the PS5 event right? Nope, Sony always has an ace up their sleeves. God of War (2018) is regarded as many to be the best game on the PS4, and here at the very end of the conference, Sony announces it’s sequel, which undoubtedly will be the best the PS5 has to offer just like it’s younger brother.

If you were a fan of the last game, the simple theme music and logo in this short teaser trailer should be enough to get you hyped for the god of war’s next outing in God of War Ragnarök. Check out the trailer here.

Spider-Man (PS4) was one of the best-selling and critically acclaimed games of the last generation praised for pretty much everything it did. Now enter Spider-Man – Miles Morales, the large expansion/ sequel that sees you taking reign of fan favourite alternative spider man Miles.

This trailer shows us more gameplay from the upcoming entry in the series and promises to provide us with more of what we loved in the first game. This is a must-watch for any superhero fans out there, watch the trailer here.

Based on arguably the most famous series of books of all time, Hogwarts legends puts you in the shoes of your very own custom Hogwarts student. This trailer shows the reimagined world Harry Potter and small snippets of gameplay showing different characters taking on the horrors that the wizarding world has to offer.

This game has been leaked and speculated about for quite some time now, so checking out the trailer is something that most definitely should be on your to-do list.

Call of Duty is back on top recently, and back to its grassroots gritty dark grounded origins, this trailer shows that the series has no intention of ruining a good thing. With some great gunplay, awe-inspiring set pieces and incredible graphics, Call of Duty Cold War is shaping up to be one of the most impressive games the series has made to date.

Check out the explosive first gameplay trailer above.

It’s no secret that the Resident Evil series fell off the edge of the being good mountain for quite a while in the 2010s. However, like a determined Sherpa trying to find his lost tourists (in this case the tourists are good review scores), Resident Evil has clawed its way back up to the top of the mountain to find glory once again in the form of three great games.

On the back of these recent hits we have Resident Evil Village, (Village being spelt Vii-lage, how very clever Capcom.) This instalment seems to take place after the events of Resident Evil 7, the first in the series to be in first person. The game seems to be very similar to the past effort from the series, apart from this time there are werewolves, very spooky.

Everyone loves Groundhog Day, it’s just a fact. And everyone loves Bethesda’s 2012 classic Dishonoured. So put the two together and you get Death Loop, and hopefully, a handful of fun should come along with the pairing. This trailer shows off the games interesting but simple storyline and shows off Death Loops interesting memory-based gameplay mechanics.

This game is without a doubt going to go down as a hidden gem in years to come, so watch the trailer now and hop on that hype train now before everyone else discovers it.

upon release Devil May Cry 5 got great review scores, now with a release on the PS5 you can play through the hype in beautiful 4k quality, and hack and slash your way to completion with all the bonus DLC included in the price.

This is going to be a must-have to anyone who wants to play through the tales of everyone’s favourite video game emo, Dante, but has yet to pick up a copy.

11 years after the release of Demon Souls, the video game scene looks quite different to how it did at the time. And for the most part, you can accredit that to the Dark Souls series, which just so happens to be the sequel to this classic video game.

It was just a case of waiting patiently for this remake to rear its head into a press conference one day, and boy is it a good thing it has. With improved gameplay and oh-so-beautiful glossy graphics, the Demon Souls remake is going to be the ultimate way to play this classic PS3 game this decade.

Check out the trailer here.

What’s better than a bunch of new games? Being able to play all your old ones for free on your new console. That’s why Sony has announced that 99 percent of PS4 games will be able to be played on your new PS5, and that is without a doubt a big win for everybody (but Xbox.)

Every 90’s babies favourite indie puzzle game for the Playstation is back, and this time Abe is on a new side-scrolling adventure. This game won’t be for everyone, but it will definitely be turning heads when it releases on the PS5.

If you managed to miss the FNAF hype, you are pretty lucky. It spawned lots of videos of children and man-children alike screaming at their computer screens, and some say this game is even responsible for Furry culture.

Well, now there Is a sequel… deep joy.

Nothing really to say here, it’s just Fortnite on the PS5, wow how exciting.

Brighton and the surrounding areas may be known for many things – the nightlife, the culture, the beaches, and...

Best Video Games to Keep You Inside During 2020