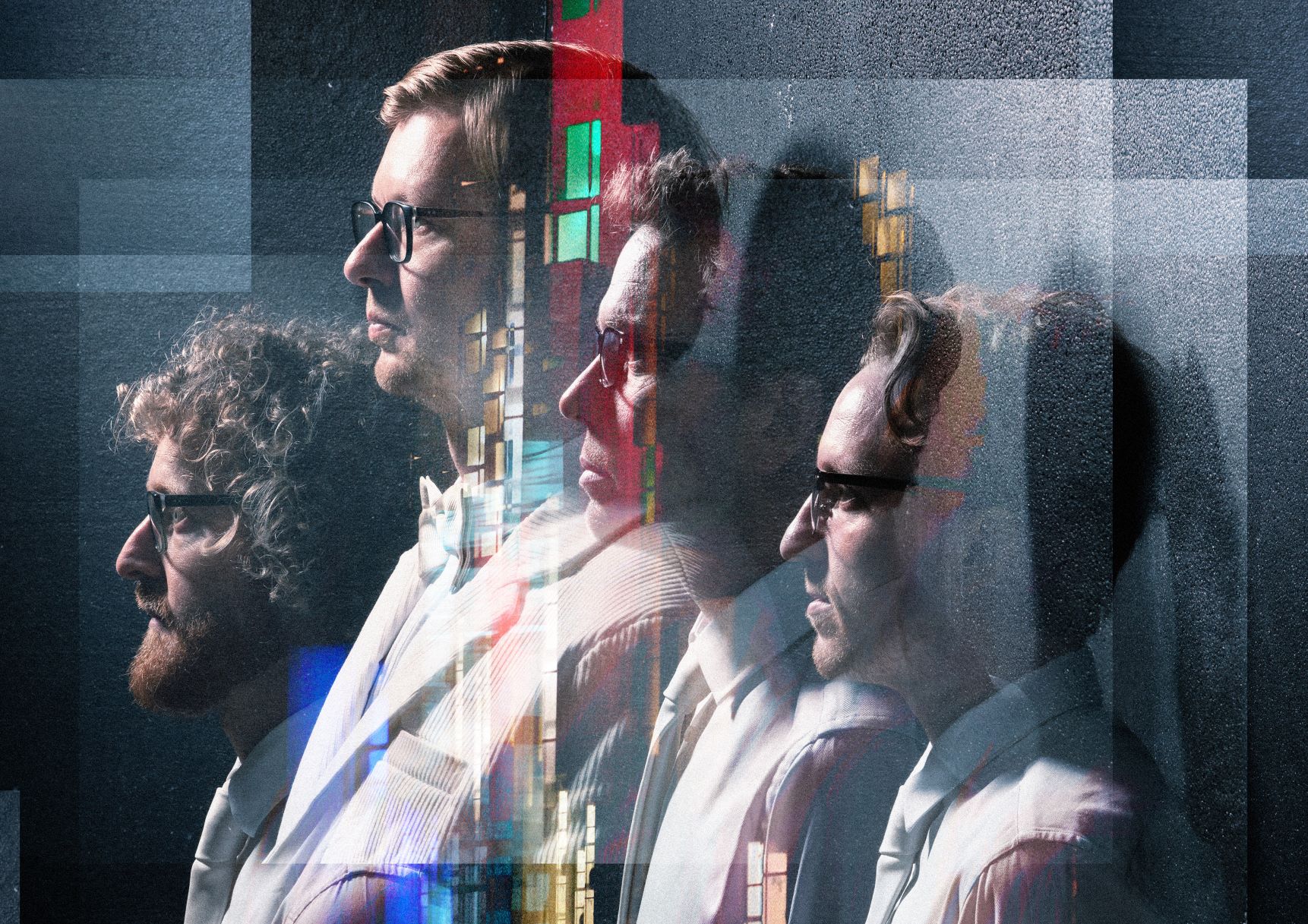 “One of the things we’ve always done well is not just creating interesting artists who make great music but creating odd musicians who work on a pop level.” J. Willgoose, Esq is musing on British culture’s ability to embrace the eccentric and singular. The nation has seen a few mercurial brilliant artists, who took the seemingly whimsical and made it profound.

Willgoose, along with his band, Public Service Broadcasting, is no stranger to uncovering beauty in less obvious places. Only recently, development for their latest album involved recording electrical interference on Berlin’s Leipzigerstrasse with a wide-band electromagnetic receiver. The site of the German capital’s first electric streetlights, a shifting spectrum of fizzes and hums presented an ethereal heartbeat which could form a base for his music.

A place which has witnessed economic booms, division, innovation and life on the edge of oblivion, Berlin has long stood as a refuge for artists and wayward souls. And now Public Service Broadcasting are attempting to understand what makes it unique amongst the European cultural tradition. Released on Fri 24 Sept, Bright Magic neatly dovetails into the city’s reputation for rule-breaking, hedonism, outrageousness and welcoming those seeking reinvention.

In 1930 Walter Ruttmann presented his pioneering tape-artwork Wochenende, merging speech, field recordings and music to create an audio collage of Berlin. Considering the incredible changes across the following century, Willgoose felt similarly compelled to explore his own personal impressions of the city. Living there between April 2019 and January 2020, he wanted to better understand its societal impact and how it has affected him personally. “I didn’t really want to address the more obvious things. A big part of writing the record was trying to investigate my idea of moving there. What is it about the place that drew me in?” The experience has seen a marked change in practice for the band. Previously renowned for using archival audio recordings to offer wry commentary on post-war society, their new work has become something more textual, but no less compelling.

Willgoose, along with multi-instrumentalists Wrigglesworth and JFAbraham, and visuals guru Mr B, have created a work which moves away from presenting clear narratives. Previous outings have examined space race technological marvels, the decline of the Welsh mining industry and 20th Century British endeavours. Across its three suites, Bright Magic places the listener in an emotional time and space with less evident historical touchstones. It shies away from the sample-laden adventures of previous compositions, offering up a selection of driving beats, vocals, soundscapes and heady future fan-favourites. Overtly more electronic (occasionally it seems almost industrial), this remains a triumphant-sounding record.

Wrigglesworth admits the album’s arrangement was subtly inspired by 2001: A Space Odyssey, a cinematic masterpiece which similarly presents three very different realities and eras. “Seeing how art like that is created and seeing how Bowie was so free with the structure on Low, it all fed into this more conceptual and abstract way of working… seeing if we could remain ‘us’ but change the way we did things.” The aesthetic connections to Bowie, and his reinvention through 1977’s revolutionary Low album, are further reinforced by Public Service Broadcasting similarly producing Bright Magic at the Hansa Tonstudio.

Mere metres from the former site of the Berlin Wall, for 60 years this iconic recording studio has welcomed artists who have been hoping to tap into the city’s inspiring environment. Bowie & Eno, Iggy Pop, REM, U2, Nick Cave and Depeche Mode have all seen Hansa pose a significant impact on their work when they’ve needed it most. Somehow this building seems to foster a special kind of energy. “While not trying to put ourselves on a footing with people like Bowie and Depeche Mode, it was quite important to find that kind of boldness. If you’re writing a record which is essentially praising the role of a city in fostering creativity and defying convention, you really can’t go there and do the same old things. You need to make your own leaps.”  But you can’t pin Berlin’s effect on creativity on a single time or place…

The city Willgoose came to could not be more different from how it looked in the 1970s. Still haunted by the scars of the war, Berlin also suffered the indignity of being physically split in two by opposing superpowers. Geographically isolated from outside influence, West Berlin somehow turned into something rather special. “Situations like that do not occur regularly in any major European cities. And it’s weird because it has had so many of those singular periods throughout history. It’s such a malleable and adaptable place. If you are that kind of creative mind, there’s something for everyone to latch onto and make their own version of the city. That’s kind of what the album is, in a microcosm.” The city’s near abandonment by the West left plentiful subsidised housing, along with empty warehouses and curious spaces waiting to be repurposed. These opportunities, and a reputation for tolerance, formed the notion of this sparsely-populated metropolis as an artistic refuge.

We’re speaking just a week away from the 60th anniversary of the infamous Berlin Wall’s construction. The sudden rift consolidated the Soviet grip on the East, while transforming the shattered capital’s western half into a backwater colony for outsiders – young German men avoiding the draft, gays, punks, artists and the bizarre. The isolated pocket of Western civilisation became a hotbed for experimental subcultures and radical politics, with less pressure to conform to commercial norms. “It’s strange coming from London, where you have to work and work to stay afloat. You can’t be quite slack or wait for stuff to happen. Which is a shame because a lot of great art comes from that kind of atmosphere. In Berlin, there’s still less of a financial constraint, and attitudes towards that way of life are much more relaxed.” And all the rapturous creative energy in Berlin wasn’t only generated by immigrants. Modern music would be a markedly less interesting without effervescent soundscapes from Tangerine Dream, the unsettling raw energy of Einstürzende Neubauten or the boisterous punk of Die Ärzte.

Demolition of the Wall in 1989 was followed by political and social reunification and the city’s hedonistic spirit evolved again. Empty industrial units were slowly converted into huge (and initially illegal) party spaces, and clubs like Tresor, E-Werk and Planet started to shape an emergent global dance music scene. The nightlife would go on to inspire some of the world’s greatest DJs, as well as huge events like Love Parade. The city still attracts artists and wayward souls, but gentrification and investment are slowly pushing out some of the free-thinking spirit and mystique.

It’s possible this is just another moment in the city’s dynamic history. Boisterous creativity has always gravitated there. The dramatic, bold and urgent statements of German Expressionism (a reaction to the Government trying to neuter foreign influences) marked a distinct step away from the traditional values of art. The Weimer Republic and the Golden Twenties saw a film-makers like Fritz Lang and Max Skladanowsky flourish and overshadow American counterparts with sheer ambition and technical achievements. Berlin has a fascination with urgency and defying convention and will continue to do so in some way.

The subject matter for Bright Magic has taken this band beyond the British zeitgeist, and there’s also been significant leaps forwards with arrangements and sonic aspirations. Textually, parts of the album share reference points with Phillp Glass and Steve Reich. There’s astute use of layers, repetition and evolution to evoke the sense of a shimmering, vibrant city. “I knew I’d been listening to New York Counterpoint quite a lot, that’s why the clarinet pulsing in some of the songs is there. But I didn’t realise how much he had got into my head. That wasn’t quite as deliberate, but I’m glad it comes through.”

The album’s production used a broad range of local guest artists, including Einstürzende Neubauten’s Blixa Bargeld, Gurr’s Andreya Casablanca and Berlin-based musician, EERA – who sings on the current single People, Let’s Dance. On reflection, this release can be viewed as a profoundly pro-European work. There’s a sense of shared inspiration, interaction and cooperation, with people working together for a greater good. Yet Bright Magic also provides regular allusions back to the halcyon days of early homegrown 80’s synth pop. Public Service Broadcasting might be looking further afield, but they’ve not forgotten their roots. This is the perfect example of what Britain has often excelled at – fostering forward-thinking chart acts, whose singular approach succeeds in shifting conversations and preconceptions.

“We [Britain] don’t just create mega-bands who fill stadiums,” says Willgoose. “We’ve seen musicians who’ve changed society. Bowie certainly did. Even acts like the KLF, who didn’t take themselves too seriously, but at the same time took it all very seriously… There’s not really that thread of absurdism running through modern-day UK music. Which is a shame.” The band also seem to have benefitted from not aligning with any discernible scene. But is there a musical genre broad enough to encompass Public Service Broadcasting? On paper they seem like Vangelis and Pop Will Eat Itself formed an ebullient funk band after an inexplicable drunken night in the Science Museum. Now someone find me a scene which fits around that…

Willgoose suggests that British music isn’t as tribal anymore. “It is more common for people to take influences from much wider sources. And not be wedded to the two guitars, bass/drums rigidity. Things seem a lot more fluid these days.” Maybe this band’s defining characteristic is really the desire to communicate ideals and explore mythologies. This is a group of people who used to communicated with live audiences through cheeky pre-recorded announcements, pillaged audio archives at the British Film institute and NASA to assemble albums discussing mankind’s greatest endeavours and worked out how to sample a city’s heartbeat. They’re the kind of brilliant, beguiling eccentrics which the British embrace. Nothing too cool, scary or odd, just fascinating us enough to leave us always hoping for a glimpse of them.

Most of the vocals (another developing creative choice) upon Bright Magic are in German, which may seem impenetrable to some. But music offers its own language of ideas, existing without explanation and relying upon its ability to create emotion. Like most artforms, it remains subjective. The answers it offers are never as important as the experience it gives us. Amongst the anodyne demands of most chart-friendly music, seems like a revolutionary act.

Asked if he sees Public Service Broadcasting as being political, Willgoose paraphrases Eno. “Any art, in itself, is a political act. I don’t think we’ve tried to be didactic or hector people because that’s counterproductive. By the nature of the subjects we choose to cover and the way we choose to cover them, it is discernible for people who want to look a bit closer.”  The band’s name could certainly be interpreted as addressing the erosion of publicly financed and objective news reporting. A public media positively influences the free market beyond, and maintains a fragile balance between government, corporate interests and society.

Whether they’re re-evaluating our romanticisation of warfare, tracing events during the Miner’s Strike or facing the stark realities of the Titanic disaster, this is hardly the kind of band which bombards listeners with overt messaging. Perhaps they’re simply too polite for polemics. Culturally, our knowledge of history often twists events out of context and reduces them down to abstractions. As Churchill said ’History is written by the victors’, which often comes at the expense of detail and identities. It’s more important than ever to gently prompt those questions which take us beyond simplified collective memory. “You always need to leave space in art for people to find their own meaning and attachment,” says Willgoose. “Part of that is leaving some of those political doors open, and just letting people find their own way through.”