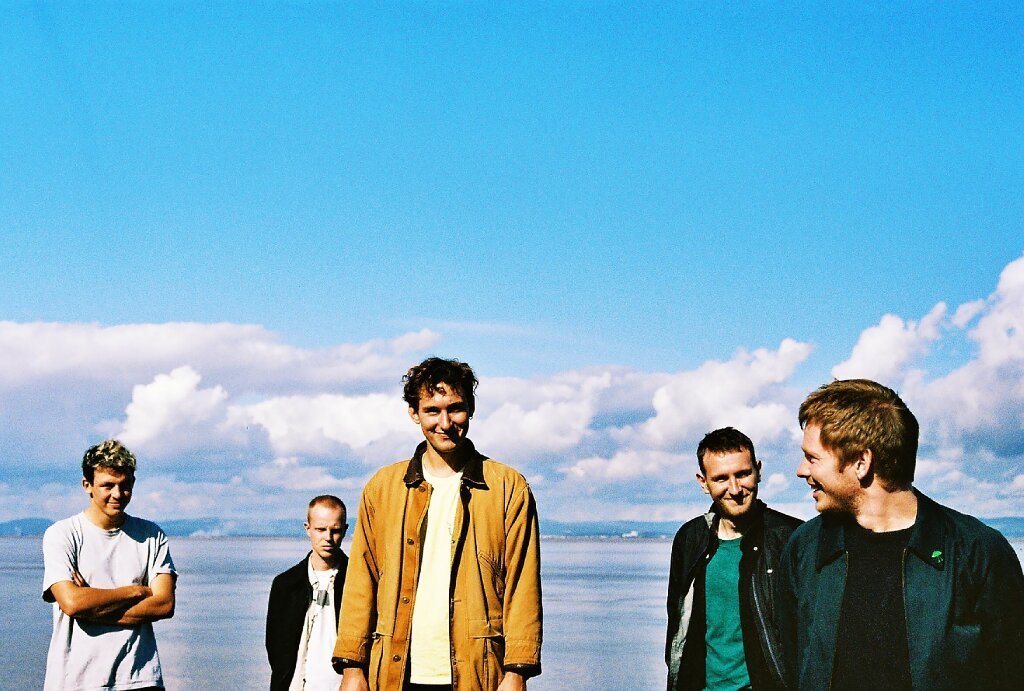 “People are learning new ways to listen,” Squid’s Louis Borlase tells me. “With a band like us, I think there’s an assumption it has to be a case of people crammed in and a lot of physical movement. People are discovering that you can enjoy something sat down.” No strangers to exploring and adapting in their music, this near-indefinable five-piece aren’t having too many issues with the reality of socially-distanced live performances. Today they’re enjoying some time in Brighton, a city they called home for several years, following last night’s Covid-safe show at Bexhill’s De La Warr Pavilion.

Their current UK tour, Fieldworks, is offering a new kind of live experience. It’s been a chance for fans to see these five multi-instrumentalists’ creative process as they form fresh ideas live onstage. Borlase jokes there’s been a few ‘chin-strokers’, but the response to a seated show from a band famed for their compelling energy has been overwhelmingly positive. “It’s perfect for our music at the moment. What we’re playing is these relatively embryonic ideas which are just starting to take form. People can get in there, and work out patterns and see where we’re taking the pieces of music… It’s nice to see them concentrate.”  Thriving on improvisation to develop songs, they’ve sidestepped any formal genres, to create something unique, and often rather wonderful.

With a string of further live dates booked, and a stonking debut album out on the shelves, it looks likely to be the ‘Summer of Squid’. Released in May, Bright Green Field is an astonishing debut, and in many ways closes the band’s first era. Across its 11 tracks it presents listeners with a slew of divergent musical forms and textures getting pushed to their extremes and then deconstructed. This might seem chaotic to you, and in the hands of less talented musicians it might well be, but everything simultaneously seems to make sense.  This barrage of ideas has seen some quarters label them as ‘experimental’, despite Squid scoring millions of streaming plays and propelling this debut to number four in the album charts. “I know some of my experimental musical heroes would probably listen to it and feel it was more contrived than their own feats. I take it as a compliment, because we do have an aspiration to be asking ourselves questions and not settling with a simple solution when writing music.” It’s a heady blend of the best, but sometimes least expected, elements from punk, jazz, funk, Krautrock and electronica. And this has prompted gasps and gushing reviews from the music press.

What Bright Green Field does do is offer a platform to an unconventional band who sizzle with ideas and hold scant regard for the traditional rock rulebook. “I don’t think we could have been more pleased with how it ended up. All the ambition which we wanted to exhibit and prove to ourselves, I think we managed to do that with the record.” Though the search for innovation never pauses. The release has simply posited new questions as to what musical directions they want to take.

Although many of these songs have lived with the band and their team for quite a while, it seems like a work which exists very much in the present. Lyrically, there’s a huge amount of coincidence on the album. Much of it deals with loneliness, which isn’t an intentional statement about lockdown and isolation, but almost everyone can now identify with these themes. The problems have always been lurking in a suppressed form, but the pandemic has exposed and exacerbated everything. “You can see them, almost like a layer on top of the water, and it’s in our hands as to how we deal with them. Everyone was excited about this new normality, and how we could maybe, with the benefit of hindsight when we come out of lockdown, work out the best way to tackle these environmental and social issues. But the rush to get back to the easiness of capitalist living has been all too tempting. It seems we’ve gone back to the old normal already.” Such is the nature of music, once you release a song it takes on different meanings for the listeners when placed in a new context. Borlase says this still takes him by surprise, especially when he’s been living with a particular set of lyrics for an extended time.

Recording for Bright Green Field took place last year, at producer Dan Carey’s house in Streatham.  The band were already good friends with the Wunderground label-owner and Heavenly Recordings associate, so there was a comforting air of familiarity during the sessions. Although meeting up as a band during 2020 offered different challenges. “We were having to be incredibly communicative, as we were coming into his home where his wife and kids are. The whole dialogue around what you can and can’t do in the middle of lockdown made for quite an interesting first week. We were all quite nervous, not just of recording, but the social and safety side of things.” One thing the band have learnt from Carey through the years is his relationship with nervous energy is quite unique. “What he’s been amazing at doing is realising there’s a translation in place between nervous and excitement, and capturing it in a way which turns it into a positive,” Borlase says with a chuckle.

There’s a fair argument that the rise of the internet has enormously helped Squid, and bands like them (if there is such a thing), find and grow their audience. Perhaps they are too esoteric for an industry which likes to pigeonhole things. Streaming offers, at least, the impression of democracy in music consumption. “We have such a cavalier approach to stylistic outputting. I think that’s been made, on an implicit level, possible through being a generation of algorithmic and playlist culture. On a van journey, we can be listening to Miley, then a South London jungle producer. It narrows those distances, both geographically and mentally.” But, perhaps streaming has dealt something of a killer blow to the careful art of sequencing an album. The first track on Bright Green Field, a 45 second melange of field recordings and found sound, is their most popular track on Spotify. “If you had a graph of the tracks played from our album, it just goes down as you get towards the end. But, that’s Spotify for you.”

The band have moved out of Brighton & Hove now, with Borlase, Laurie Nankivell and Ollie Judge moving to Bristol, Arthur Leadbetter heading for London and Anton Pearson ending up somewhere in Wiltshire. Borlase grew up in Bristol, so it‘s been a great experience returning. “We were lucky when we all lived in Brighton, because we knew a lot of other people doing music and working in venues or record shops. But in Bristol we’ve not had a lot of opportunity to integrate with the wider music community. So, we are looking forwards to getting to know it a bit better…” Obviously, they’ve had to increasingly work remotely over the past 14 months, which is problematic for a band founded on immediacy and improvisation – a practice which comes from line of sight and physical presence. It’s also seen their longest period apart since the band’s formation. But nothing has fundamentally changed with their outlook since the formative years. They still have the same relationship with music. The only difference being is people’s reactions to it and Squid’s growing popularity. He says it is strange, but the increased attention has become a driving factor.

It’s on the road where the band truly come alive. And as Britian’s live scene remerges, there’s already been some amazing shows – although it’s still a strange experience. “We’d forgotten those feelings of performing and interacting with an audience. When we played in Falmouth on the first night, we ran back into the green room, and were quite confused. As we’ve gone on, we’ve been reminding ourselves how to perform and have fun on stage. It’s a seated audience, so it’s new for them. That novelty of a socially-distanced gig seems to transcend the space between stage and audience quite well.”

The one thing about being on tour, after so long being at home with family and friends, everyone has a differing attitude to what it means to be willingly exhausted on tour. The observation of each other’s wellbeing has become a priority for the band. Whether they’re feeling good or bad can exist as a feature of the music and their improvisation. As five young men, Borlase believes they all carry a duty to themselves and everyone around them to be aware of each other’s mental health.

He says they’ve been quite lucky, because they’ve usually had a chance to befriend people they work with beforehand, so the entire team is close. “I think 2019 was a pretty fucking nutty year for us, and we didn’t have many opportunities to breathe. It all affected us in different ways. Like everyone else, the last 14 months of lockdown has given an important period of reflection. As we emerge out the other end, we have a slightly better understanding of everyone’s needs, mentally and physically, and what we can get away with.”