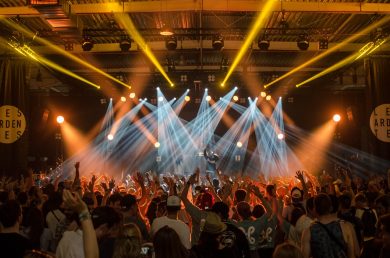 When Sticky Mike’s Frog Bar closed their doors on New Year’s Eve, the live music scene was vitally affected. The impact of this loss is still being felt, as new acts and upcoming artists struggle to get a foothold.

Now, the city is fighting back with a grassroots music festival to launch across 19 venues in Brighton from 22 April – 5 May.

Gary Prosser from Fightback Brighton (Music Venues Trust) said: “These venues are the backbone of the live music scene in Brighton, providing spaces where artists can take their first steps.”

And the city’s independent venues have shown fierce support, gigs are filling up calendars at Concorde 2, Patterns, The Prince Albert, The Green Door Store and The Quadrant.

The Hope and Ruin, a participating venue, is managed by Creative Director Sally Ann Oakenfold. She has spoken of the urgent need to take venues out of the hands of private landlords. She said: “The whole landscape is changing. We’re the eco-system at the very bottom that creates and lets these nights flourish.”

Influential nights grow from modest beginnings, made possible by the risks small venues are willing to take. DJ night 23 Degrees started out at Sticky Mike’s and moved on to Patterns before touring all over the country.

Sally Ann, former manager of Sticky Mike’s, is still overwhelmed with requests from bands wanting to play, students getting in touch about fundraising parties. She said: “Without that starting point these things will stop developing, storing up problems for the future with young people having nowhere to go.”

In 2016 a petition was presented to the Brighton & Hove City Council to improve the stability of small venues, and a Live Music Venues Policy Panel was set up. Sticky Mike’s was identified as one of the key performers on the live music scene in Brighton.

A Live Music Roundtable was set up in 2018, a public-private partnership between BHCC and the ‘Brighton Music Office’ to safeguard grassroots venues in the city. By the end of 2018, the BMO had been disbanded, and despite assurances, Sticky Mike’s disappeared from the scene.

Live music in Brighton generates an estimated £112m PA for the local economy, and is an essential force in giving the city its dynamic and vibrant edge.

Sally Ann said: “We’re getting a bit fed up of it now, a lot of money has been spent on brochures and proposals, when are the council going to do something about it?

Last week, Lloyd Russell-Moyle MP for Kemptown & Peacehaven wrote to the Chancellor about the “discrimination” in the Government’s 2018 autumn budget. Discounts on business rates were given to restaurants and pubs with no concessions for grassroots music venues which they say “are not similar in nature.”

Lloyd Russell-Moyle identified Latest Music Bar and Concorde 2 as two local venues that would benefit from investment. He said: “Grassroots music venues are where many successful UK artists, like Ed Sheeran, have played their first gigs yet 35% have closed in the past decade.”

If you want to get involved in Fightback Brighton’s two-week festival go to www.mvtfightback.com/brighton for full listings.