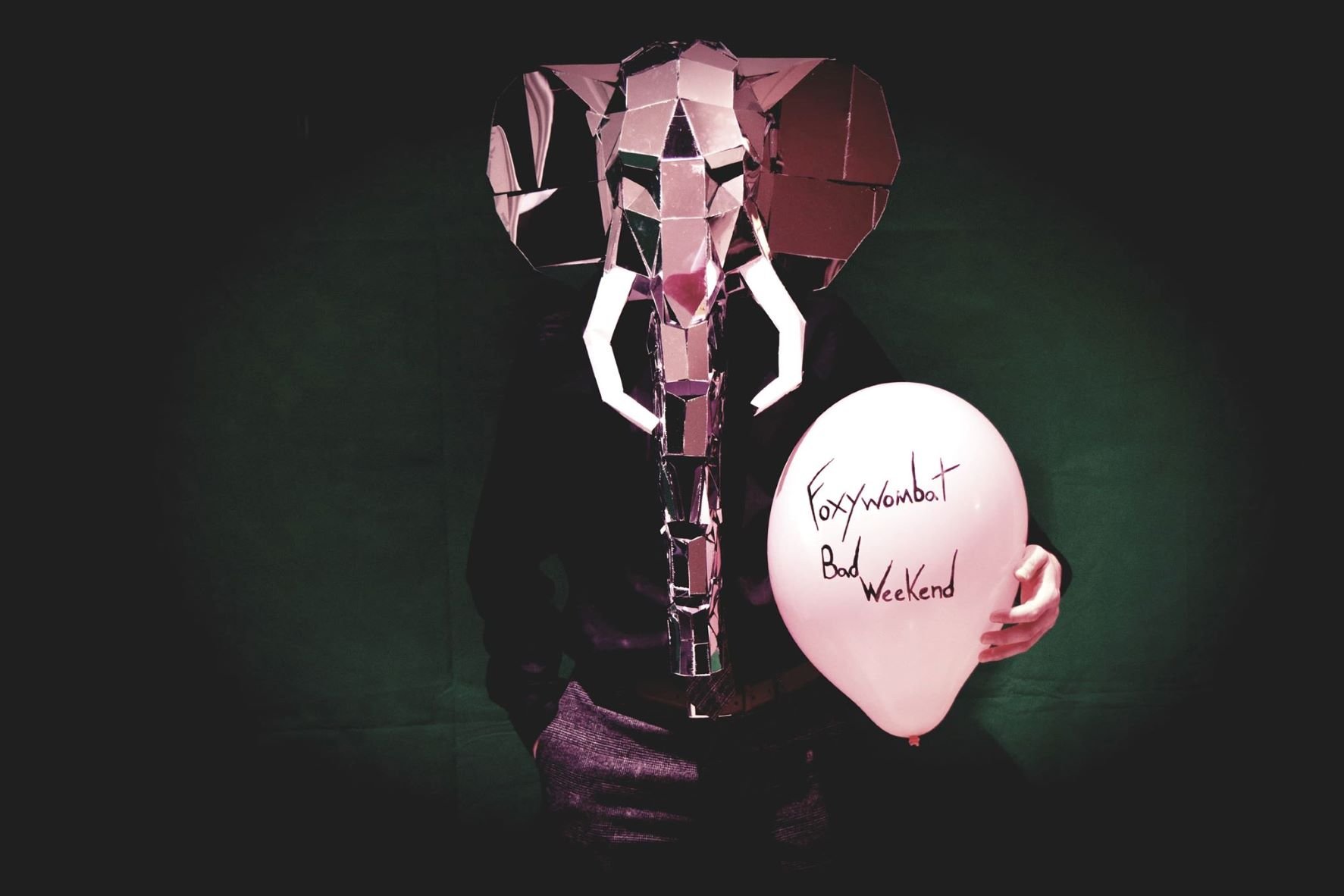 Sitting at the heavier end of Indie Rock with some funky elements to get you dancing, FOXYWOMBAT are sporting a fresh-blooded line-up and are already hitting the stage, to great success. Two headbanging gigs underway and requests for more flying in every day, this band of Brighton’s own seem unstoppable.

In the band are (left to right) lead singer and rhythm guitarist Ross Wheeler (founder of the band), Dean Theodosiou on lead guitar, Charlie Tomlinson on bass and Abigail Mann on drums.

I caught up with FOXYWOMBAT at a much needed coffee morning following their gig at The Prince Albert – A fantastic night where I drank, moshed, and generally made a tit of myself while heckling the band.

(Scroll for shots of shots… This crew knows how to show a crowd a good time!)

When did the band form?

Dean joined me… the day before lockdown started. It was the worst timing – literally, we met up at Spoons, got excited about making music, and the next day we couldn’t leave the house.

Dean – I was in a project prior to that where I wasn’t getting to do as much as I wanted to anyway. So when I met up with Ross, it was awesome to join something that was happening and where everyone was keen to be doing things. Lockdown was a bummer, but made a lot easier by having this safety net of a genuinely good band that were chasing things to do… but that doesn’t feel like work – I was so excited to do something in a band, to do music, and I wasn’t going to let lockdown stop me!

Abi – I’ve been with the band for two months now and it’s great  – we’ve got plans to start writing new songs soon, I have a lot of drum grooves that I’m working on that I want to incorporate into our set. We’re just so busy at the moment with practice and gigs, it’s been great though.

Charlie – Yeah, I joined just under a month ago, but it was so exciting to get involved with a band that already has so many plans. No one is sitting still here.

Ross – It’s been a good time recently – Abi and Dean both brought a lot of enthusiasm and connections which really rocketed forward our plans coming out of lockdown. And Charlie, even though he’s only been with us for three weeks… it just works. I write the songs, whack ‘em in the group chat and everyone just gets on with it!

You write all the songs?

Ross – No, I’ve stolen them! Joking. I write them, and my girlfriend edits the lyrics… before they get too depressing! The ones currently on Spotify all came together quickly within two days. Two Drinks, Too Deep and Déjà Vu were written back to back, even though they were released a year apart. For both of those I wrote the lyrics and the music at the same time. But then Bad Weekend started with a little guitar riff and the rest followed.

We will be hunkering down into the recording studio soon – there’s all new material coming that I wrote this year… I guess you could call it lockdown music really! It’s currently in our live set, so you’ll have to come to our next gig to hear it if you can’t wait for the release.

You have a sound I can’t quite put my finger on.. What are your influences?

Ross – Haha, I don’t know, I’ve never really nailed it down either! I wrote down some of my influences the other day and it was a really impressive sounding list but… I guess my earliest musical memories would be of ABBA and The Carpenters. My dad was really into Bonnie Tyler, like, he doesn’t sing at all but whenever Bonnie Tyler came on he would absolutely belt it.

Up to date would be Don Broco… (Ross and Charlie went off on one at this point in a mixture of admiration over the music and despair over the lead singer’s “personal crisis” of fashion). What else? Biffy Clyro, The Hoosiers, MIKA. The Darkness heavily influence my singing; I love the falsetto. Our overall sound is a hearty blend of the above. It’s a unique sound that’s like you said: hard to describe.

Dean – Some people have compared us to Arcane Roots, I’ll take that! And Lower than Atlantis… shame they’re on hiatus.

Charlie – Ahh Deadliest Catch [a Lower Than Atlantis song]… that riff! The Arcane Roots thing is interesting, I can hear that in the breakdown of Déjà Vu. When I first started learning the tracks I think my immediate reaction was to think of Don Broco, to be honest – especially when I was learning Two Drinks.

How did it feel to be doing live gigs again?

Ross – Scary to be honest. It’s been over a year and a half of not doing live gigs because of everything. But it was amazing, I was so comfortable and everyone pulled it off WAY better than we rightfully should have, having only been practicing together for like 3 weeks. Probably the best first gig back I could have hoped for after so long away.

Charlie – I’m always impressed at how you pull off that vocal slide on Bad Weekend!

A Quickie with… The Spitfires

Charlie – I was 17 the last time I played a gig, so five years ago, and it felt really good to be back. It’s almost more nerve-wracking to play to a crowd of music students though.. It’s a toss up, it can either be the best crowd because you know everyone is really listening to the music… or the worst because they are thinking so deeply about what you’re doing. Déjà Vu went down so well – but we knew it would! Overall, I absolutely loved being back. Once we had soundchecked and heard how fat we sounded… I knew we were going to smash it.

However. I want it to be on the record that the tequila shots before we went on stage were a mistake… or maybe there was just one too many!

Abi – Yeah, it was good. Being lower down, sat at the drums, I wasn’t as blinded by the light. I could see everyone’s reaction and they were loving it! The gig was really fun, I’m excited to play the next shows we have lined up too. Now we have the first gig out the way, we’re back in the groove and ready for the next opportunity that comes our way.

Dean – Motivating… I can’t wait to carry on playing. We’ve already got so many bookings, and got another one last night. So it can only go up from here.. Last night was just over too quickly! Orchards fucking killed it – you wouldn’t have known the guitarist had literally just dislocated his shoulder! He gave his all – dancing around and getting up on the kick drum. Yeah.

Abi – We’ve discussed putting on our own show at some point… hopefully fairly soon. Keep your eyes peeled!

FOXYWOMBAT’s new line up seem unstoppable! They have a bunch of new music releasing soon – most recent, last week in fact, is a  PHASELESS remix of Two Drinks, Too Deep to celebrate the original’s two – year release anniversary. To get a sneak preview of their future releases, go to one of their live shows!

Follow them on Social Medias to keep up to date with new releases and gig announcements:

You can already listen to Déjà Vu, Two Drinks, Too Deep, and Bad Weekend on YouTube and on Spotify > Just click on the EP cover below!