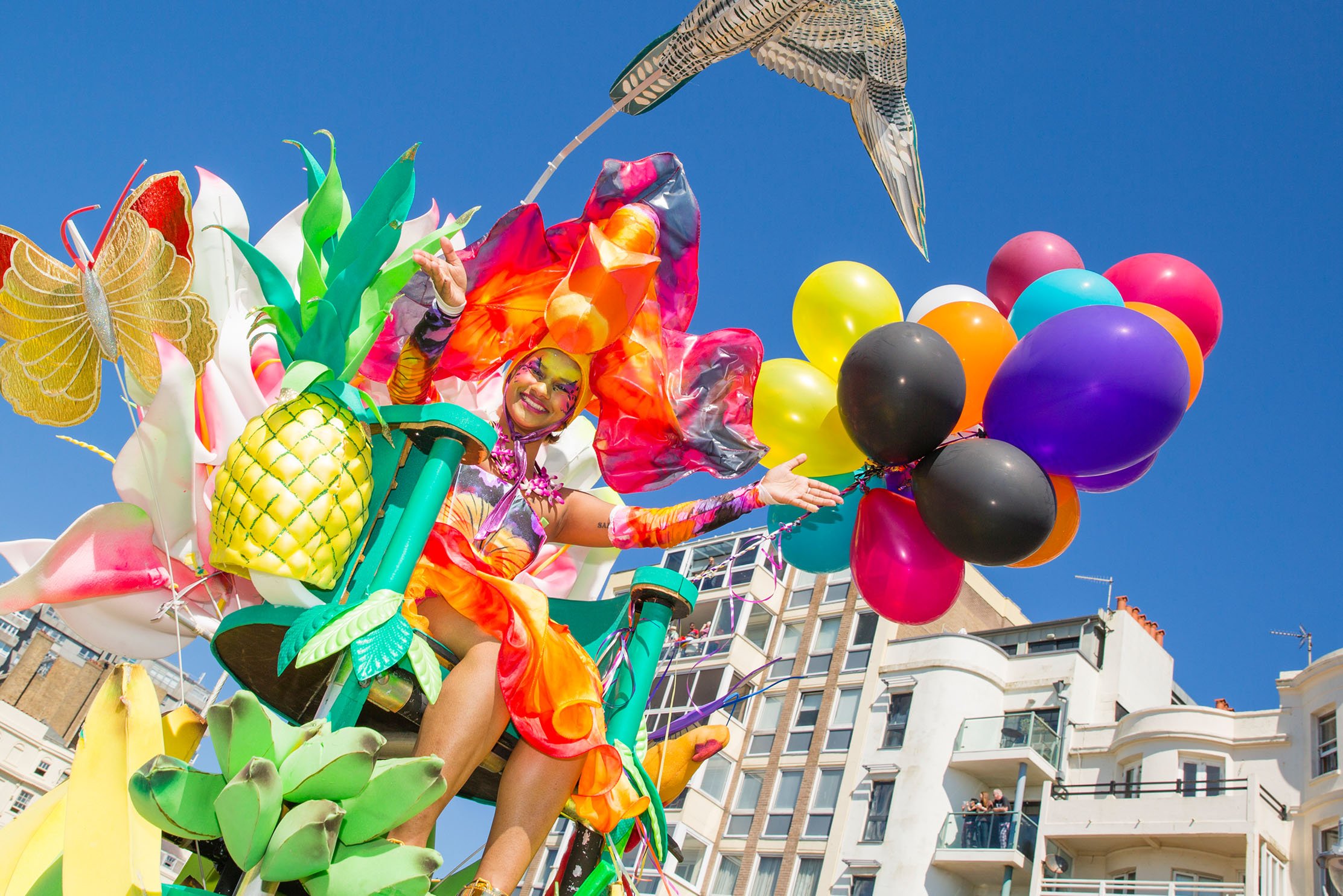 As we barrel towards summer once again, local Brightonians are winding up for arguably the biggest event on the cities calendar – Pride 2019. It feels like the festival is getting larger and more electrifying every year, what with Britney Spears headlining the music in 2018 and now our little seaside city will be graced by pop- legend, Kylie Minogue. We are honoured!

As anyone who’s been part of the festivities before knows, music is just one pillar in the Parthenon that is Brighton Pride. The renowned Pride Community Parade will be marching from Hove Lawns, through Brighton to Preston Park.

Every year, the parade draws over 300,000 people into the streets in celebration. There will be representatives from a number of Brighton communities including police and fire services, the NHS, Girl Guides and Scouts to name but a few. A 50m rainbow flag will accompany the procession as a beacon of Pride’s diversity and inclusivity. This is always a colourful frenzy of fun so make sure you get a spot on the parade path early and expect to be knocking elbows with the rest of Brighton!

Spanning the entire weekend, the main party will converge in Preston Park for the official Pride In The Park event, where you’ll find Kylie on the Saturday along with Fleur East, Clean Bandit, Bjorn Again and many more. The whole area will be converted into a festival space so expect multiple stages and tents, hosting a range of musicians and entertainers. Little party animals can kick it in the Family Diversity Area for face-painting, costume making, dancing and games. Make sure to get over to the Market Area for some awesome festi-food and produce to keep you fuelled up.

Don’t think it ends there though,as Sunday sees the park switch down a gear for the chilled out LoveBN1Fest. Again, there’s going to be some fabulous musicians including Jessie J and Grace Jones headlining the party. Keep an eye out for the BN1 Magazine tent where we will have some fantastic local DJs spinning the decks to keep your Sunday afternoon funky.

Meanwhile, Brighton’s Kemptown will set the scene for a weekend long Pride Village Party where local businesses will throw open their doors with a load more entertainers, DJs, artists and of course, bars. All of this is to raise some extra funds for local charities the Rainbow Fund and the Social Impact Fund. The Pride Village Party is a wristband only event so make sure you purchase yours early to avoid disappointment.

If you’re not a Brighton local but still want to join in the festivities, Pride is organising a large camp-site to the north of the city, within walking distance of all events. Camping can be arranged through the Brighton Pride website.

With support for Brighton Pride growing every year, 2019 looks to be our city’s biggest and best event yet. With some incredible entertainment, exciting venues and a atmosphere of equality and inclusion that’s stronger than ever, come and join the hoards of beautiful people and have a party in the streets.

Check out the Pride Website at www.brighton-pride.org for more info on all events and tickets.