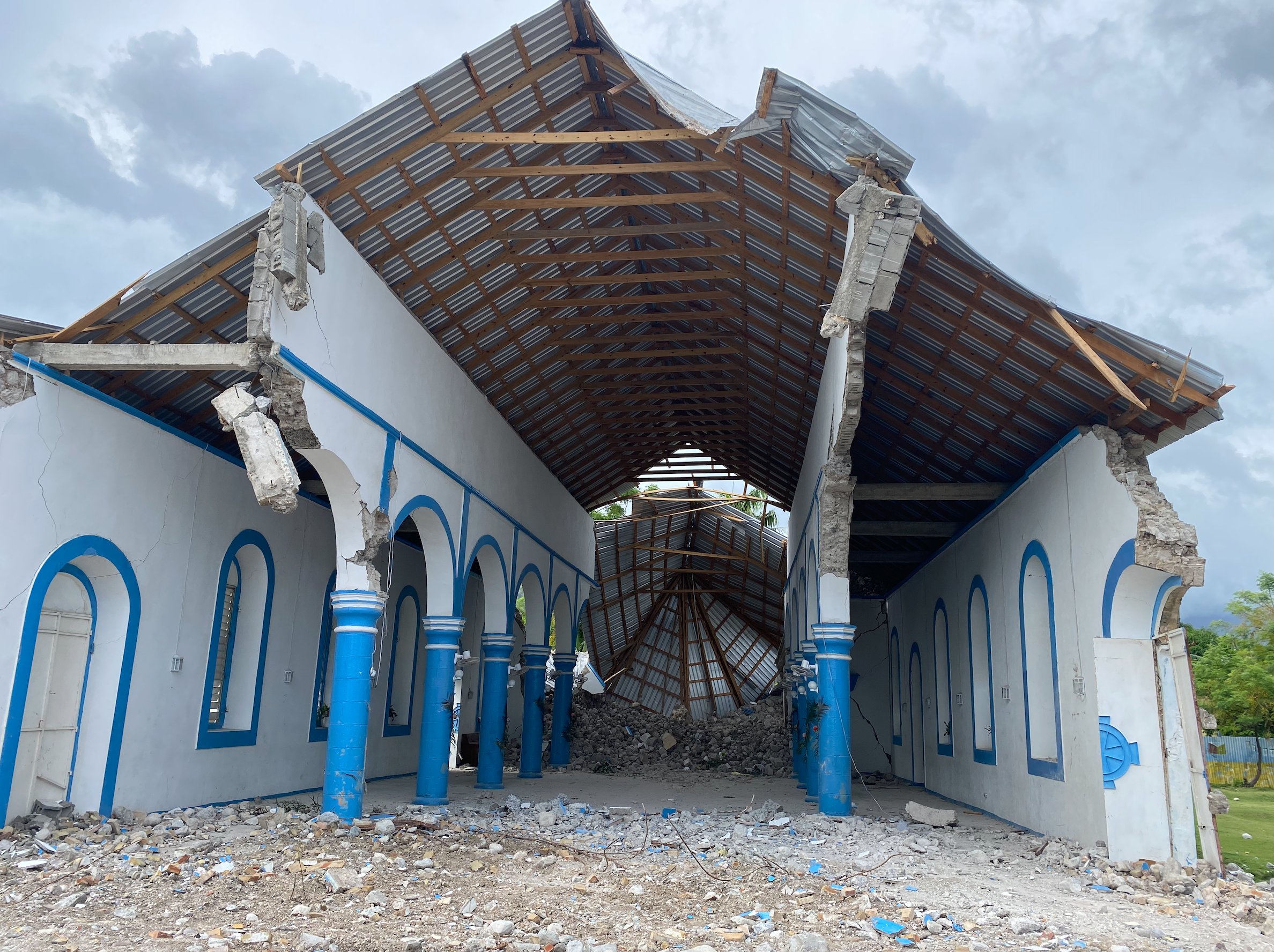 On 14 August at 8:30 am local time, a 7.2 magnitude earthquake struck the south-western coast of Haiti causing large-scale damage across the country’s southern peninsula. The powerful 10 km deep earthquake occurred 13 km southeast of Petit-Troude-Nippes, in the department of Nippes, the same region devastated by Hurricane Matthew in 2016. Only two days after the quake, Tropical Depression Grace dumped extremely heavy rains in southern Haiti, causing flooding in the same quake-affected areas.

“I so was nearly out” she says, and that’s when it collapsed on me…” Drapheka, local of Las Anglais, village desperate in need of aid following church collapse at mass christening.

According to the latest reports issued by the Haitian Civil Protection on 21 August, the death toll has now surpassed 2,200 with more than 12,200 people injured. Almost 53,000 homes have been destroyed and more than 77,000 have sustained damage. About 800,000 people have been affected and an estimated 650,000 people – 40 per cent of the 1.6 million people living in the affected departments – are in need of emergency humanitarian assistance.

On 20 August BBC’s James Clayton shared the story of Las Anglais, a coastal village 2 hours west of Les Cayes. During the earthquake the village church, reported by one local to be “the nicest thing we have”, collapsed during a mass christening -one in which dozens of children were meant to be christened before friends and family.

One such child was Esther. It was an exciting day for her mother, Drapheka, who had brought her to the church early… She was about to sit-down when the earthquake hit.

The church started to wobble. Drapheka tried to run out, clutching Esther, however all the exits were blocked by other people trying to flee.  She decided to try and leave from the front. “I so was nearly out” she says, and that’s when it collapsed on me…”

Drapheka has injuries to her head, back and legs, but survived. Esther was tragically killed in her arms.

Drapheka’s house is unsafe. She’s currently sleeping outside. She says her body hurts and she winces when she tries to move. She has a nasty head injury.

Very little aid has got to these kinds of areas. Even a tent, or tarpaulin would be hugely helpful to the town – as would medical expertise, food etc.

Pride at the Ironworks over Aug and Sept

Brighton local Ed Heller has been put in touch with Haitian officials in the area, and has secured shipping routes in order to provide aid from right here in Brighton. His food business The Ethicurean Guild is donating tents and other supplies, and is hoping to get donations from you, the lovely people of Brighton, to add to his supply ship – which will be heading to Haiti every few weeks for as long as they need it.

He’s willing to barter for supplies – and is even going so far as to offer up a delicious roast in return for a tent this weekend. Head to The Bear on Lewes Road, or the Stoneham on Portland Road, if you are keen to take Ed up on this delicious and generous offer. You can also donate or trade any other supplies you may have at those two pubs, or contact Ed to arrange deliveries at: [email protected]

2 man tent = one free roast, bigger tents = 2 free roasts. MUST be water tight and have all ropes and pegs etc. This is to secure a dry spot for people to recover from injuries and have some semblance of a home during on-going floods.