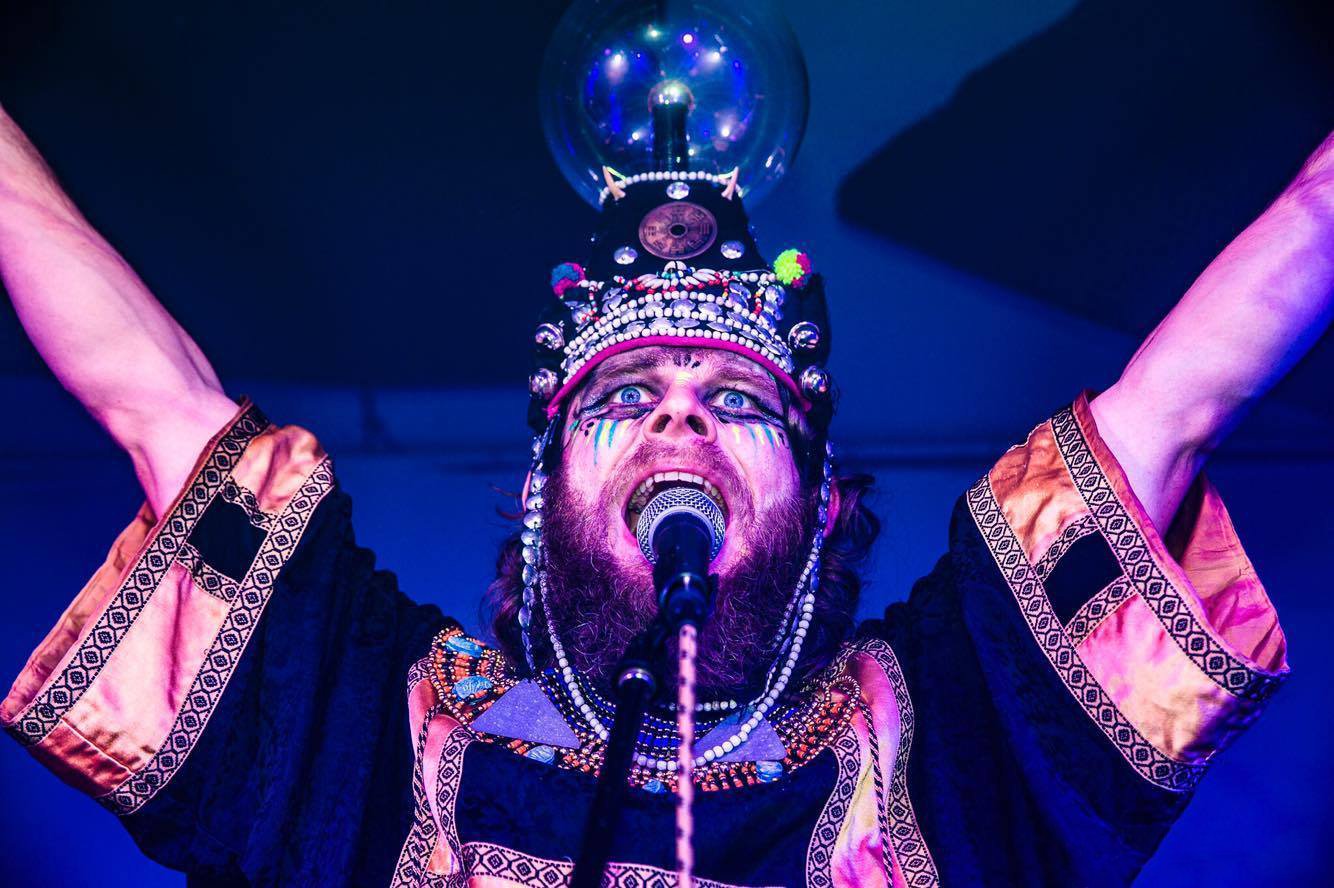 HENGE Review from The Haunt Brighton

A friend of mine told me that seeing HENGE perform live would be like watching a live retro sci-fi film whilst blasting out Spotify’s best rave, rock and metal playlists on shuffle… whilst on acid. So obviously with that kind of intro, when the extraterrestrial ravers recently crash-landed in Brighton for a night of intergalactic, genre-bending mayhem, I just had to go and check it out!

I got to The Haunt moments before the band where set to be on stage, grabbed a pint and slinked my way towards the front for a prime spot at which point I noticed what looked like something wearing a Hollywood grade, Alien prosthetic head, take its’ place behind the keys and then another two creatures scurrying on to take up drums and bass.

With an ominous blast of synth filling the room, the enigmatic, wild-bearded, front (alien) man, Zpor welcomed the audience with a formal salutation ‘Greetings Earthlings’.

Flashing a mischievous grin, Zpor surveyed the room and launched into Henges back story to prepare any first timers for the themed musical journey we were about to encounter.

In short: Zpor fled his home planet, Agricular and travelled across the galaxy picking up musical influences and stray creatures to deliver a message of peace, love, sustainability and demilitarization to humankind through the medium of ‘Cosmic Dross’ the unique blend of genre-bending of tunes Henge put out. Zpor’s life force is contained in the Plasma Orb on top of his Fez (It looked amazing!) and is thousands of years old, the body we see is just a rental, he decided on pudgy 36 Y/o male for authenticity.

With introductions completed we’re thrown into a wave of Cosmic Dross, mixing rock, synth pop, rave, metal and maybe even polka across a full set of intergalactic bangers!

After a few tracks in and the crowd are in full rave mode, with glow sticks and glitter paint smeared everywhere. The band drop a dub steppy, hip hop, synth track with high pitch rapping through a vocoder which then drops through the floor to the beyond-bassy chorus of ‘Get Outta Ma House’.

Things are getting sweaty and Zpors’ readjusts his Plasma Fez and asks the crowd if they like substances before launching into the insanely trippy 180 bpm polka “In Praise of Water” needless to say water, beer and other fluids are launched into the air as the crowd manically moshes to the beat.

The show climaxes on mbira (thumb piano) lead, anti-war anthem “Demilitarise” with most of the crowd already knowing the words but for those who don’t a band member holds up prompt card with lyrics on while Zpor jumps into the audience to be embraced by adoring fans, say hello and sing along with faces old and new:

Throughout the set I’ve pogoed through space and time, been thrown around in a mosh pit of asteroids and seen all kinds of shapes being thrown around by the 18 – 80 y/o mixed audience of fantastic creatures … this crowd LOVE this band and as I chant along to the chorus with all the other voices, I become another Henge convert, ready to pass on the message of peace, love and rave!