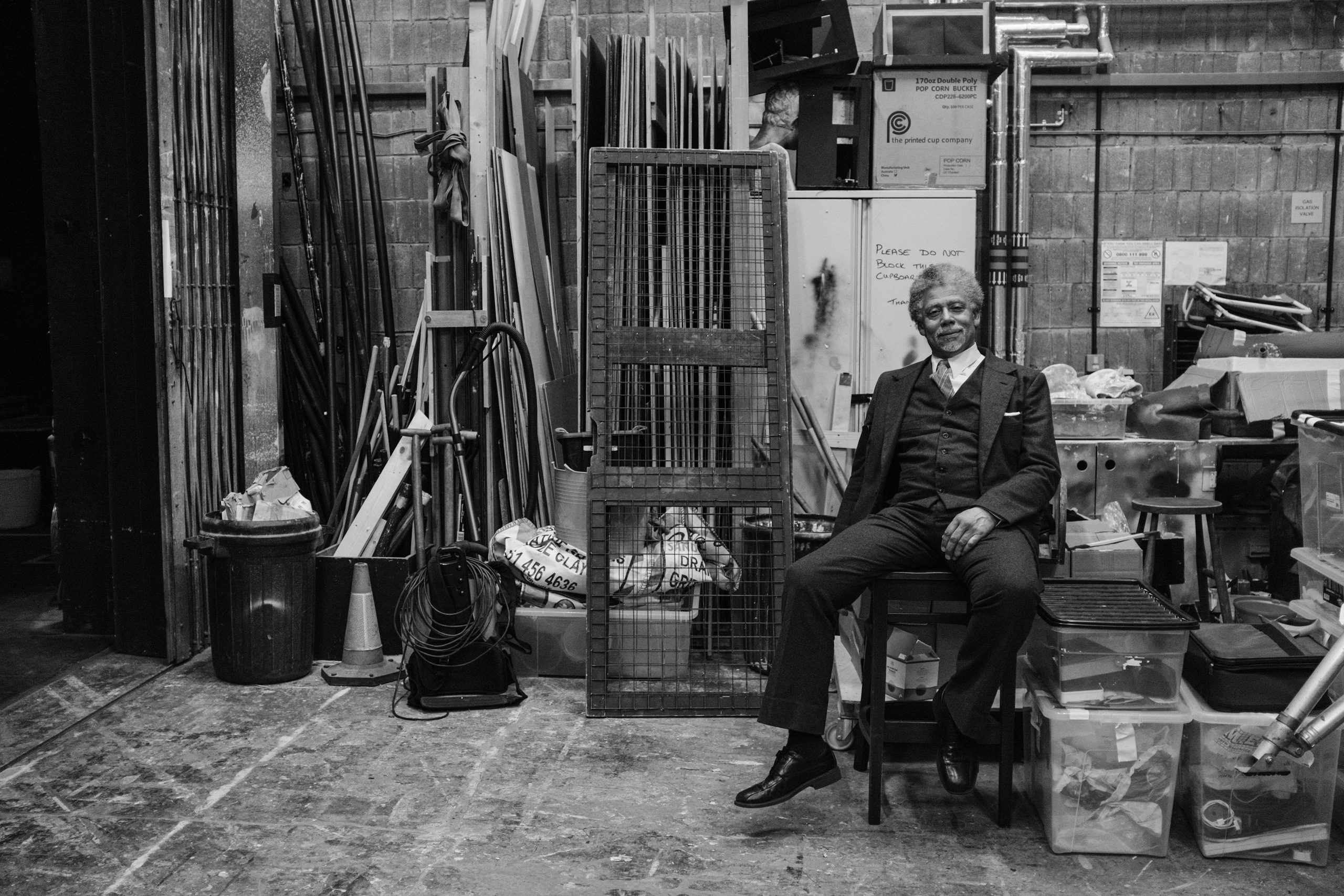 There’s a certain air of mysticism around theatre people. For two hours a night, actors welcome us with open arms. But when the curtain finally falls, we’re shielded from its peculiar world, with all its unsocial hours, gruelling travel, personal rituals and camaraderie. Now Ian Kelsey, the star of 2022’s touring production of The Rise And Fall Of Little Voice, is about to unveil a photo exhibition which reveals a very personal look at backstage life. 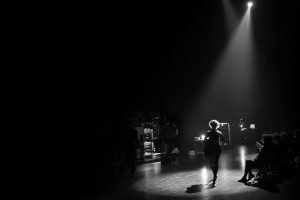 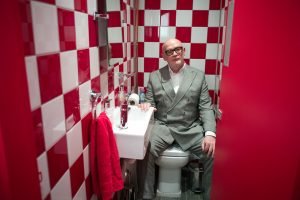 “Actors can be very habitual in their track,” he tells me. “If they have two scenes off, they’ll either go to the toilet or sit in the same place. Every night… It’s almost as if they’re hitting their marks onstage.” The show, which has been unveiled in Theatre Royal Brighton’s Phipp’s Room, is packed with sights you wouldn’t normally see. His experience as an actor means he can gauge when to capture candid shots revealing hidden truths without getting in the way of his colleagues’ process. There’s no shortage of photographers who get backstage access, but only few provide anything unique beyond familiar tropes like performers applying make-up in a mirror.

Kelsey says the project came from a need to occupy himself while out on tour. “I’m away for five months at a time. Sitting in front of my computer, working out what shots I’ve got, is something that keeps me creative between getting up and curtain-up. If you don’t mind yourself on tour, it can be quite dark and damaging.” The Shoreham resident was intent on getting access to Theatre Royal Brighton to expand his vision to document visiting tours, but the spectre of Covid meant theatre companies were reluctant to welcome another body around their productions. Just one person passing on an infection could cost a tour thousands of pounds. Only last Christmas, the theatre’s Christmas hosting of Everybody’s Talking About Jamie had to be cancelled due to a rash of infections. 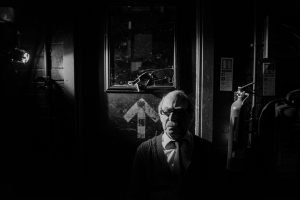 It’s understandable. The pandemic has had a profound impact on theatre, and almost every company has needed to establish strict working practices. “Even though they say you can go back to work, I don’t fancy kissing someone onstage who has Covid. I know mates who’ve been out on tour and have been binned…” So, a compromise was found with the offer of display space upstairs in the venue. The process has seen Kelsey further expand his photography skills. Working with RePrint Brighton, he learned how best to prepare prints for exhibition. “They really took care preparing my prints. Making sure the black tones were black… It was a fantastic journey.”

He’s been taking pictures for several years, right back to when he was starring in Casualty and Down To Earth. “I could see these fantastic photos happening in front of me, so I just started taking snaps. It’s all the stuff that the audience don’t get to see. It’s like the iceberg underneath the tip.” As Little Voice begins to travel around the country, he’s now hoping to capture some backstage images to swap into his exhibition before the tour hits its Theatre Royal Brighton run on Mon 25 – Sat 30 April. 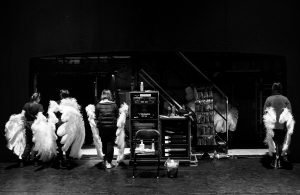 This seems like a poignant time for director Bronagh Lagan and Half Full Productions staging of Little Voice, though the story has resonated with us for almost 30 years. It focuses on a reclusive young woman, who escapes her humdrum reality by embodying the famous divas she idolises. Then one day, her mimicry of iconic divas turns the unassuming LV into an overnight sensation. It’s a fantastical work, which speaks about breaking out of the everyday, believing there can be something better and finding your voice in a confusing world.

Kelsey plays the hapless talent-manager Ray Say, joining Shobna Gulati (Coronation Street, Everybody’s Talking About Jamie – including that previously mentioned ill-fated touring version) as Mari Hoff and two-time Drama Desk nominee Christina Bianco, in this exuberant version of Jim Cartwright’s modern classic. Bianco’s transformation from YouTube showbusiness diva into the titular LV has been effortless apparently. “She’s playing it perfectly with the timid stuff, but when she gets in front of the mic she goes for it. Her Shirley Bassey and Judy Garland… it’s like ‘bloody hell!’ She’s just fantastic.” He’s been friends with Gulati for several years, which makes for an easier and more convincing dynamic with his onstage love interest. 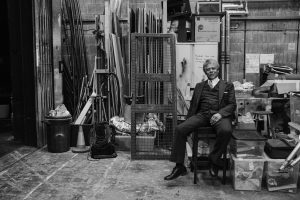 The pair met when they signed up for Where The Heart Is. “Or ‘Where The Cheque Went’ as we call it,” he says with a huge laugh. “We were taking over in series ten as the new family. Then the whole show got binned. Thank God I didn’t buy a house off the back of that.” The pair have kept in touch ever since. He confirms it’s very comfortable performing with someone you know, because it can take a long time to establish a chemistry with co-stars. The two seem to be leaps and bounds ahead of where others might be.

Anyone taking on the role of Ray Say is almost certainly going to draw comparisons with Sir Michael Caine’s portrayal in the cinematic version of Little Voice. Although, Kelsey says he has purposefully avoided seeing the film again for fear of it influencing his own performance. He’s still stitching his version of this complex character together. One of the things he finds most fun within the rehearsal is getting things wrong and evolving his understanding of the part. Performing comedy is an interesting challenge for any actor because you can have lots of ideas, but if you introduce them too liberally or early on people start becoming immune to their charms. “You have a read-through, and I usually try to be ‘off-book’ from day one, so I can just crack on without being tied to looking at lines. You can gauge if you’ve got it right after all the prep at home. So, you know that delivery works.” 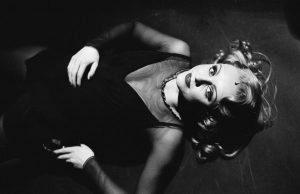 Comedy acting is arguably the most difficult form of stagecraft. It relies on performers raising the bar very slowly during pre-production, so their delivery sounds as fresh as possible on opening night. Obviously, it helps when you have a script as well-rounded as Little Voice – there’s a reason the show is still around after three decades. “Jim Cartwright has written superb slapstick. His stage directions are almost telegraphing what the actor should be doing. I’ve never read anything with such detailed looks and pauses.” Although, even the best script isn’t a substitute for aptitude. You’ve either ‘got it’ or you haven’t. “You need to be brave in that rehearsal room. And prepared to look a fool…”

Despite being a recognisable West End leading man, and starring in TV staples like Coronation Street, Doctors and Casualty, he says he did have a couple of fallow years. And this inevitably led to self-examination around his career path. “I was kind of in between Morse and Lewis. I’m too old to play the young copper, and I’m not craggy enough to play the old copper.” He’d been doing free photographic headshots for mates and considered doing that professionally. But there was a realisation that you can’t do both. It would have meant stepping away from acting, and he simply wasn’t prepared to go that far. “I also didn’t want to look at my camera bag with disdain. I still love taking photos, but I don’t want to HAVE to take them.” Now he’s taking the first few tentative steps towards exhibiting his work in public. He says he’s still a little embarrassed about putting himself out there. Some of his prints are on display in Shoreham’s landmark pub The Bridge, after the manager wanted something to reflect the theatre across the road.

The War Of The Worlds at Brighton Centre review 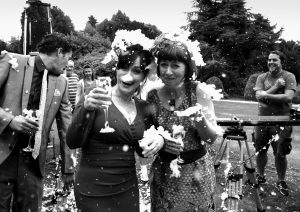 One of Kelsey’s ambitions is obtaining access to the unseen areas in a hotel – taking pictures of night porters, changing beds and laundry rounds, and documenting what really makes these places tick. “But obviously no hotel wants you backstage, because it’s carnage.” As of yet, there are no grand intentions for this work. Kelsey just wants to provide an insight into what lies behind the smoke and mirrors. These compelling and revealing images can offer a widening of the dramatic experience, giving us sights generally hidden away and helping us better understand the worlds beyond the polished product audiences are presented with.

One instance of his photography shattering this managed illusion involves a large-scale (and for now, unnamed) theatre production. Every evening, the show sees two women sink below the stage with the help of a trapdoor. Only, it doesn’t lower them completely out of view, so they must bend their knees and remain hidden until the curtain falls. Kelsey photographed the crouching pair chatting inside this peculiar space, as they wait for the scene’s end. His wider portfolio also extends to shots captured during his tenure on TV. There’s one image which documents an incident on the set of Doctors when a snow machine went out of control. The cast are stood covered in snow, roaring with laughter. “It’s stuff like that which is lovely to share. And hopefully it will make people smile.”

Ian Kelsey’s exhibition of backstage photography is in the Theatre Royal Brighton’s Phipp’s Room for the next nine months.

The Rise And Fall Of Little Voice comes to Theatre Royal Brighton on Mon 25 – Sat 30 April.