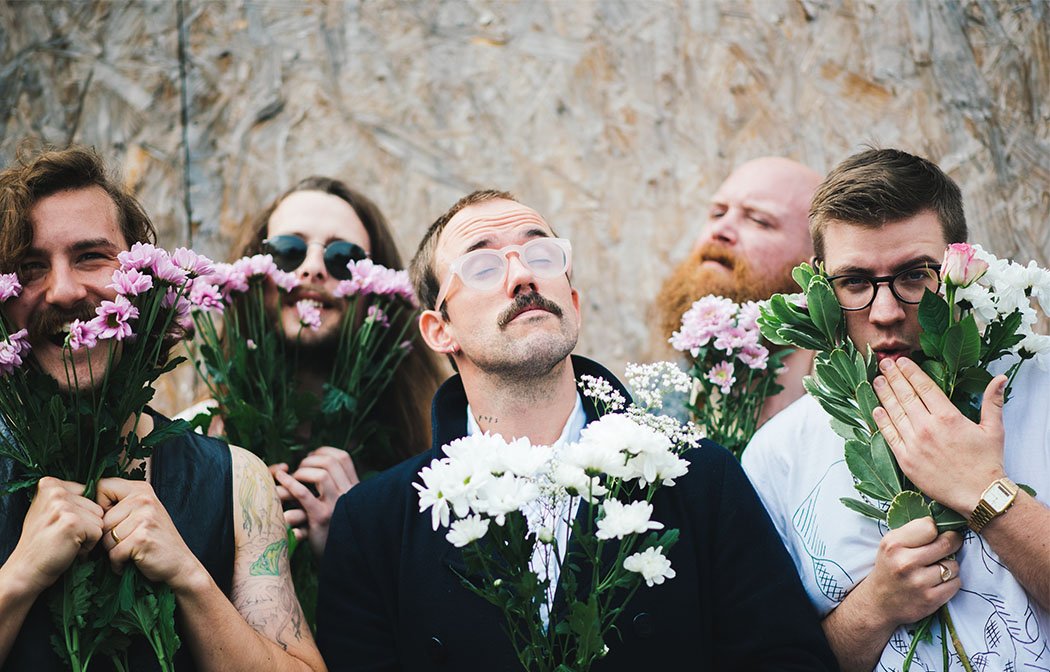 It takes me three attempts to reach Joe from IDLES; he finally tells me he’s in the middle of getting a tattoo, and wants to chat before his phone runs out of battery. His frantic schedule doesn’t come as a surprise.

“I’ve got interviews all day, so if you’re all good to go, then so am I,” he replies, after I’ve asked him whether or not he wants to reschedule our interview – preferably to a time when he’s not being repeatedly stabbed by motorised needles. The circumstances of our interview say a lot; Joe’s managed to maintain a relentless agenda for several years now, moving through grief and struggle to create some of the most urgently compelling music heard this decade. “We don’t have to keep doing it,” he says. ”But we do keep doing it, because we’ve got an energy to us that we love”.

‘We’ve just got lots of things to do. Weíve started the third album now.’

A glutton for punishment, Joe’s previously stated that he started writing the band’s second record (out last month) as soon as Brutalism had finished being recorded, When I ask him about the root of his work ethic, he muses on the matter, gritting his teeth mid-answer. I can almost hear the needles scraping his skin. “We’ve just got a lot of things to do. We’ve started the third album now.” He pauses. “Sorry, the needles are going so I’m gonna brace myself, hell-O!” His voice strains, the needles buzzing loudly as he attempts to string a sentence together without expressing the pain he’s in. “Yeah… We’re… On this third album now and we’re gonna keep going”. It’s clear within minutes of speaking to him that this is an essential process, a progression that comes with experiencing the kind of trauma Joe has been through. Both the passing of his mother and his daughter Agatha have dramatically shaped his world view, forcing him to look inward and channel his grief into art.

Joy as an Act of Resistance, however, comes from a different, more controlled place than Brutalism does. “The second album is more reflective, more about progress, using grief and embracing pain and sadness as a way of moving forward, using vulnerability as a gift to your audience, to encourage vulnerability and create your open-mindedness as a form of progression politically.” The refined nature of their second LP is immediate, they sound altogether more ambitious, expansive and considered.

‘It was art imitating life really…’

Joe’s mentioned before that this change in pace runs in tandem with the record’s meaning: it comes across as slightly less personable, more about an overarching message than about serving as a biographical piece. The album itself still exudes a genuinely heavy and brutal honesty, with the differences from their debut existing as noticeable subtleties. Joe remarks that this change came from an intentional shift in the bands attitude towards writing. “We wrote a whole bunch of songs over about a year and  then we scrapped them all because we realised that we were writing under pressure instead of writing for the enjoyment of writing.” Joe pauses, while the sound of the needles die down slightly. “It was art imitating life really, it was about looking inwards and remembering why we started the album in the first place, which was to enjoy making, not to please everyone and all that jazz”.

‘Philosophically we used joy as an act of resistance for everything.’

“You’ll hear there’s a bit more depth there because we’re allowing each other to play instead of all playing at the same time, we’re confident enough to stop playing, and listen to each other which is where the depth comes from, the dynamic’s there because we allow it, we allow each other to breathe”. Listening to Joy as an Act of Resistance you’d be hard-pressed to find an element of the band that hasn’t improved in some way, and Joe recognises the stylistic tweaks. “There’s less of an explosive nature to that album but in turn it becomes more visceral and just more innate.” I ask whether he’ll have a cooldown period after years of constant writing and performing. He interrupts me almost immediately. “No… It’s all about keeping the momentum going.” Like many artists going through a grieving process, creativity for Joe is a way of coping; it’s cathartic in an unparalleled way that allows you to process what you’ve been through and create something out of it.

Unsurprisingly, Joe’s influences mainly come from within. “The influences for me came from my life, The Descent of Man by Grayson Perry; thinking about masculinity in a way that I’ve never thought of before but realised that I’ve always thought of it that way, I’ve just never articulated it. Life is imitated by art, it’s inspired.” Asking further about what inspires the band from an instrumental standpoint Joe says that, “sonically, we just wear our influences on our sleeves; because we allow each other to breathe as individuals it all comes out, we don’t talk about it. Musically, this album is heavily influenced but we’ve never talked about it, I can’t talk about it because I don’t really know”.

Joy as an Act of Resistance has a unique ire about it, the sound of a band one-upping a seminal album. Letting my curiosity get the better of me, I ask what we can expect from the already underway third album: “I’m not gonna tell you anything about the third album until it’s written my friend.” There’s a short silence before he ends the interview by saying, “I understand you’ve gotta give it a go but that ain’t happening.” He then laughs to himself and hangs up.