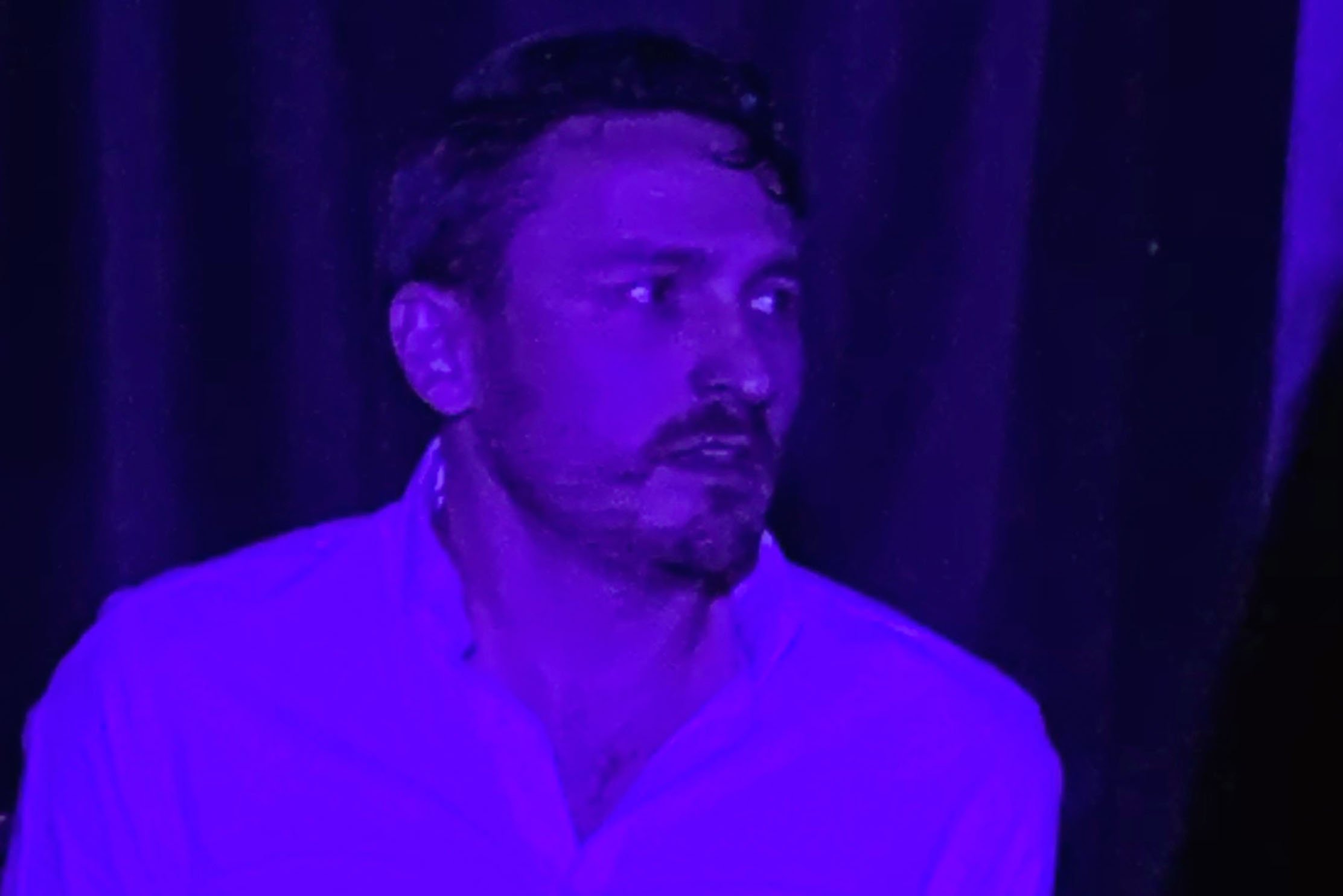 In the Shadow of the Black Dog at Brighton Fringe – review

“Jesus’ ascension into heaven was not an ending, but a beginning for humanity,” says a live mass on Radio 4 as I get in the car, after watching In the Shadow of the Black Dog, a one-man monologue written and performed by Daniel Hallissey.

I thought back to the intense-eyed, wiry-bodied Alquist played by actor Hallissey, speaking about the death of his best friend: “Thoughts of his end become my beginning.”

Have I had a messiah moment? Am I still having it?

The semi-autobiographical performance is just Hallissey, dressed in simple black jeans and a crisp white shirt, a table and two chairs under a low ceiling and some very bright lighting, which goes blue at times.

It is a journey through Alquist’s life and a turn of events.

While ricocheting in confused grief, Alquist is chased down by two knife-wielding men on a moped threatening to kill him.

He has seen the death of a man caused by his own mental condition and he himself has almost been killed by other men for no reason other than being a man, in the wrong place at the wrong time.

It leaves him questioning what it means to be a man: “I dunno if I can save myself.”

He reaches out to the men in his life, his absent father and his boss who loves him like a son, or at least the type of son who is an adult drinking-partner with non-testing banter.

“Are we educated to be emotionally illiterate?” Hallissey asks after a night getting drunk and nowhere.

“Where do men go to grieve?”

Fed up, angry and lost.

The play is a simple story intertwining the doubts, depression and dangerous terrain of being a young man in a big city today.

I think he wants us to stop and think, open up and be honest to each other, revealing our emotions and truth, however alien that process may feel.

And yet this performance makes you laugh out loud.

Like good situational comedy, you can relate to it.

You are laughing at the familiarity, your own pain and suffering and at your attempt to navigate this thing called life.

Hallissey starts the show by looking into the audience and staring intently into the eyes of every audience member.

There is no fear in that stare.

In fact, his desire to gain your full attention with those eyes, is rather disconcerting.

He voices the confusion of people unable to emotionally articulate themselves and far more used to euphoric oblivion on a combination of pills, booze and sex.

Unable to open-up, interactions with friends, family and lovers leave him wanting.

Yet through this black dog fog, a name given to depression, comes gallows humour.

I looked at the floor as Hallissey peaked in his frantic solo description of the event.

Or is it because the intensity of that moment, usually only witnessed by the two people involved, can now be felt several rows back into the audience.

Hallissey bravely addresses the context around sexual behaviour, the unsaid gentleness, the vulnerability not shown, and the fine lines of nuance and perception.

Catch Me! Comes to Brighton Dome

And this man can act.

He feels entirely comfortable on the stage and that makes you comfortable too, which is saying something, with this nowhere-to-hide setting.

A bleeding bum and dysfunctional relationships with women.

Until he meets Isabella and the stars and romance interject.

The newness and optimism of being smitten.

Hallissey reminds you of the power of new love and, well, just how lovely that is.

“It is our capacity for pain that allows us to feel love,” says Alquist or Hallissey, because I am not sure which is which now.

The writing, which consists primarily of Alquist’s voice, feels real and natural, contains humour and pathos and makes you smile, laugh and cry.

This play made me feel uncomfortable while at the same time giving me comfort.

It is a decent attempt at discussing the human condition with some beautiful poignant lines dotted throughout and a few funnies too.

Well done, Daniel Hallissey, that pretty much was sixty minutes of perfection.