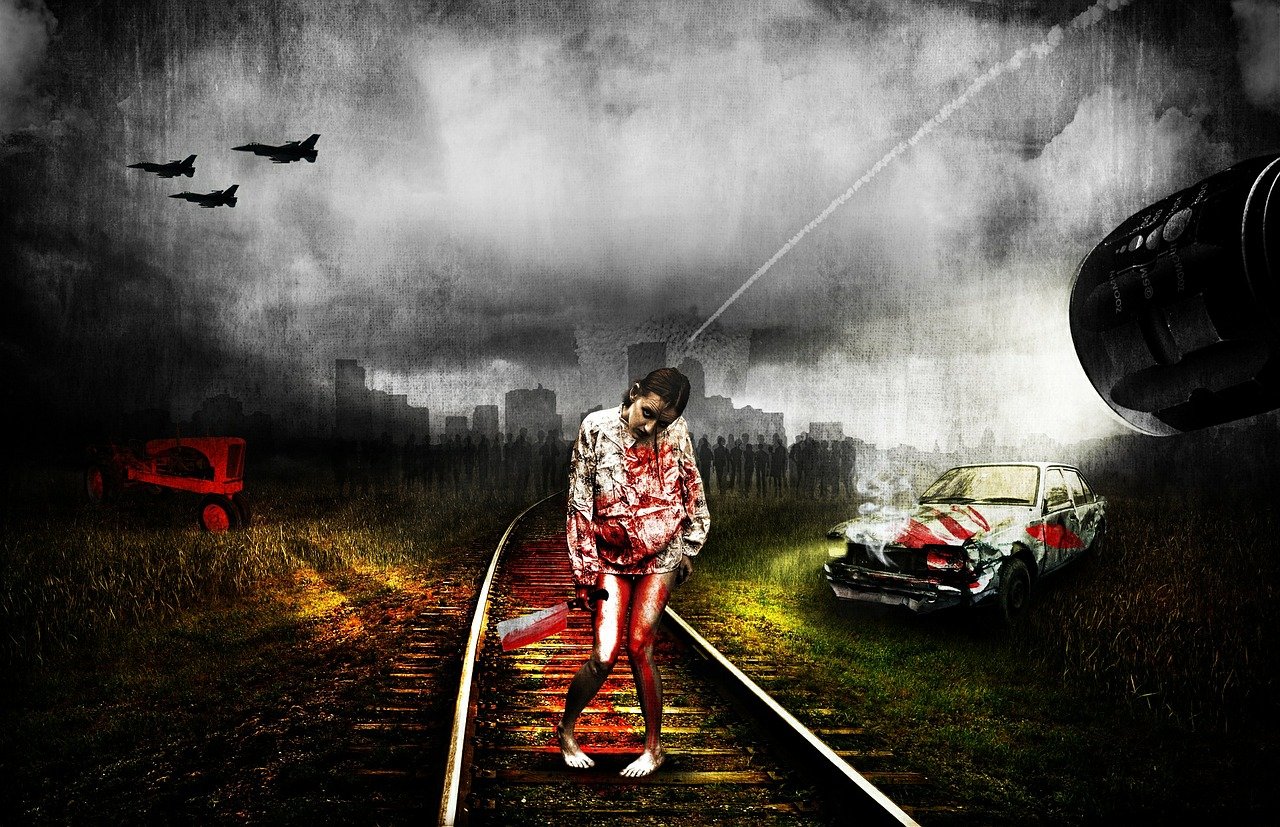 It Could Be Worse…

Am I the only one who thinks I might be in the grips of some weird mushroom dream, and actually there is no killer virus travelling round the globe causing untold misery and unprecedented disruption to the world?  Come to think of it, maybe this nightmare started even earlier, and we haven’t left Europe, England didn’t lose to Iceland in the 2016 Euros, and Donald Trump is still just a fat businessman with an appalling record of bankruptcy and a hilarious candy-floss combover, and mercifully such a cartoon megalomaniac doesn’t have the keys to the White House or access to the US’s big red buttons. It must be a dream, right? No sensible populace or hallucinogen-free grownup would ever vote for such a power-hungry racist, misogynistic, narcissist, would they? Oh right, yeah – America.

Well, with the depressing realisation that this isn’t a dream, how about we console ourselves with the prospect that things could be worse (maybe not with regards the leaders of some of the most powerful countries in the world – I’m looking at you Bo Jo…), but with regards the Coronavirus, at least. What’s worse than a droplet-transmitted, respiratory virus that’s spreading round the world? That’s right, the zombie virus! (I know it’s not realistic, but neither is America’s even-more-annoying version of Alan Sugar running the free world, and if they refuse to deal in realism, so do I).

Here is a selection of zombie movies to watch whilst we’re holed up at home, some classics, some less known. And just think, at least when we look out the window to remind ourselves what fresh air looks like, we won’t have to see a hoard of ravaged, dead-eyed, groaning monsters roaming the streets. (Unless some Crystal Palace fans are back in town).

White Zombie (1932)
Most people (i.e. me, before researching this), think of George Romero’s Night of the Living Dead as being the first zombie movie. However, 36 years before that classic brought the genre to the mainstream, the first star of horror, Bela Lugosi, plays a strangely-moustached witchdoctor called Murder (Hollywood was more subtle back then…), in Victor Halperin’s story of Haitian voodoo zombies. Lugosi is, as always, the standout, in what is otherwise perhaps not exactly the thriller it might have appeared at the time. It’s an interesting watch though, as an early example of experimental cinema. A remastered version is available on YouTube here.

The Plague of the Zombies (1966)
Early zombie movies like White Zombie and 1943’s I Walked with a Zombie (featuring the brown-your-trousers-frightening zombie enforcer, Carrefour) portrayed them as being linked to voodoo and religious cultism, rather than man-eating monsters, with their only visually identifiable zombieness being vacant eyes. It was John Gilling’s feature that first bestowed them with the type of mobility and dermatological issues we now associate with them: awkward limps, dreadful posture, lack of exfoliation coupled with rampant dental disregard. Strangely under the radar, this appears to have hugely influenced Night of the Living Dead, released just two years later.

Night of the Living Dead (1968)
So, maybe not the first, but certainly the most important zombie movie of all time, Romero’s film set the template that the genre has followed ever since: zombies are now officially reanimated corpses; they’re unthinking; they’re not bothered by injury; they can only be stopped when their brain is destroyed; oh, and they love scoffing human flesh. The low budget masterpiece sees a group of people hide out in an old farmhouse (already creepy), to escape the what turn out to be flesh-eating zombies, although the word zombie isn’t mentioned once throughout the film. Somehow all the more chilling for being shot in black and white, this is an absolute must for any fan of the zombie trope.

Dawn of the Dead (1978)
Essentially the same movie, but now shot with a huge increase in budget and subsequent improvement in special effects, Romero’s sequel is shot in a Philadelphia shopping mall that is being overrun by the walking dead. With nods to anti-consumerism and the collapse of civilisation, this is a smarter, more complex movie than Night of the Living Dead, and is full of comic book violence and gore. What’s not to love?

Re-Animator (1985)
The first zombie movie to approach the genre with tongues firmly wedged in cheeks. Based on H.P. Lovecraft’s 1921 story, Herbert West, Re-Animator, the film focuses on West, a young scientist who thinks it’s a solid idea to try and reanimate dead people by injecting them with a syringe of green liquid: you can tell it’s going to go badly as the liquid is glowing, and if there’s one thing that science has taught us, it’s that glowing liquids are normally bad for one’s health. Unsurprisingly, the recently undeadified corpses go bat-shit crazy and try and kill everyone and everything around them. As gory as it is funny, this is a great film for anyone that loves zombies but can’t really take them seriously.

Braindead [aka Dead Alive] (1992)
Long before he made blockbusters about elves and fairies and princesses and people with long hair looking for rings (that’s a wild guess, I’ve not seen any of them), Peter Jackson released this schlock comedy horror. Only just out of the 80s, the special effects are still in that category of, by today’s standards, hammy and unrealistic. But for fans of that era of the film industry, that makes this almost slapstick entry onto the list, all the more entertaining. An elderly lady is bitten by a “Sumatran Rat-Monkey” and dies – whereupon she comes back to life, killing and eating pets, friends and family alike, in what is touted as one of the bloodiest movies of all time!

Shaun of the Dead (2004)
Responsible, at least in part, for the re-igniting of the genre’s popularity, this is many people’s favourite zombie movie. With the impossible-not-to-like pairing of Pegg and Frost supported by a who’s-who of UK small- and silver-screen royalty, Edgar Wright’s first film in his Cornetto Trilogy seems like a lesson in how to direct a comedy horror. When Shaun’s uneventful life is interrupted by the zombie apocalypse, he tries to save his loved ones and win his girlfriend back, by rounding them up and taking them to the safest place he knows, his local pub, The Winchester to “wait for this all to blow over.”

REC (2007)
This Spanish film is presented as “found footage”, a style that works perfectly for zombie movies. A TV reporter and cameraman sneak inside a quarantined building and soon find themselves locked inside. Why is the building quarantined? Well, the fact that it’s on a list of zombie movies somewhat ruins the surprise, but yes, inside there is a breakout of zombies. Claustrophobically shot, and with fast moving, 28 Days Later-style zombies, you’ll jump out of your skin on several occasions. Spare pair of pants recommended.

Pontypool (2008)
Sounding vaguely like it should be about a nice day out at a Welsh seaside resort, this is often described as a cerebral take on the zombie genre, and for good reason. Although filled with the gore and violence you would expect (and perhaps want) from the genre, this is not your normal zombie flick. To start with, the virus isn’t passed on through biting people but through ideas, through spoken language, and it is these “conversationalists” (the term used instead of zombies), that spread what is otherwise, ostensibly a zombie virus. A commentary on society as much as anything, this intelligent, postmodern take such on a classic theme gives horror fans everything they want, but packaged in a surprising, almost philosophical film.

The Crazies (2010)
Based on George Romero’s 1973 film of the same name (but he has enough entries on the list already), this 2010 remake sees residents of an idyllic farming town start exhibiting strange behaviour: a local man walks into a baseball game holding a shotgun and, unresponsive, is shot; a local farmer burns his house down with his family in. As other residents also become violent psychopaths, seemingly for no reason, those unaffected fight to survive, whilst trying to work out what’s happening. Perhaps not strictly a zombie movie, it follows a similar pattern of outbreak and violence, with an element of added mystery, and is definitely worthy of a mention.

Train to Busan (2016)
Bringing high production values to an often low budget genre, this South Korean entry into the world of zombies is as impressive as it is thrilling. Partially set on a train from Seoul to Busan, the film deals with a zombie outbreak in real time, with passengers unable to escape the mayhem. Clipped cinematography coupled with committed performances from the whole cast add to the intriguing and claustrophobic setting to make this an edge-of-your-seat, look-through-your-fingers, catch-your-breath spectacle of a modern zombie movie.

I hope you found something of interest there, and are able to lose yourself for a couple of hours watching one or more of them. Now, if you dare, creep back to your window and peak out to see if anyone’s acting suspiciously…