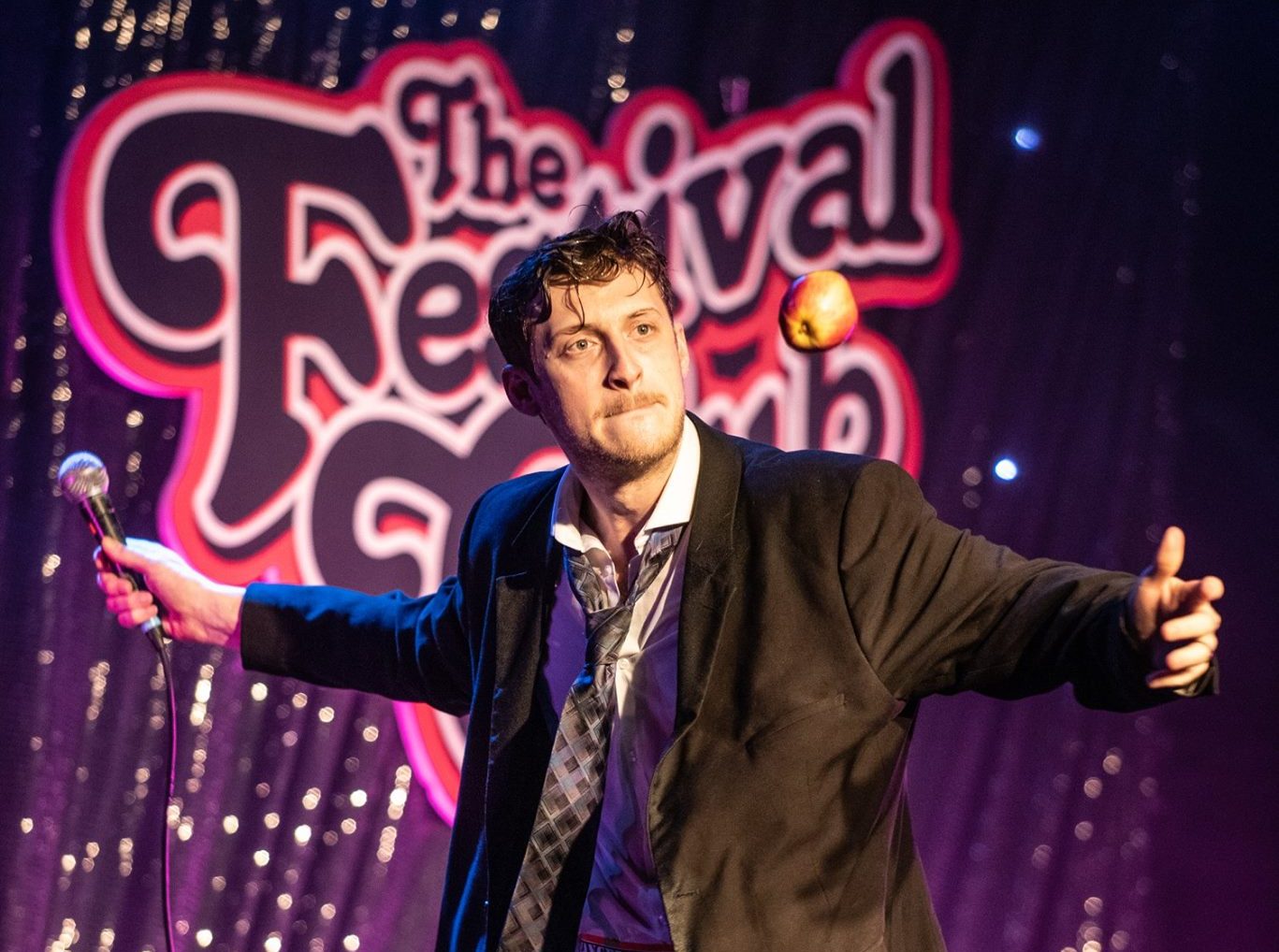 Returning with numerous accolades for ‘Best Comedy’ from previous editions of Brighton and Adelaide Fringe with comedy partner, Viggo, Zach Zucker is ready to present his newest guise. On the Thursday night of the show, the crowd queuing outside is crammed into the confines of The Warren’s Theatre Box. After sold-out gigs in New York, LA and London, there is a palpable uncertainty in the air of what we are about to witness – not your usual stand-up, that is indisputable.

The mildly obnoxious but endearing New Yorker persona, Jack Tucker, is fittingly introduced to stage by the infamous track ‘Who Let The Dogs Out’ by Baha Men. He saunters onto stage confidently despite his slightly dishevelled appearance in his stained suit. Swigging a pint in one hand, he desperately clutched at an award in the other. Jack’s scatty, strange, and surreal demeanour is immediately unusual from the dry, self-deprecating stand-ups we are accustomed to in the UK. The audience seems initially overwhelmed and confused by his extraverted, flirtatious, tell-it-like-it-is attitude as he interacts with them.

What really sets this show apart from your conventional stand-up routine is Zach’s rapport with director and sound effects aficionado, Jonny Woolley. They embody the stereotypical image of one comedian and a microphone and turn it on its head. Ready with a barrage of sound effects, Jonny knows Zach’s every move. Every conceited comment he makes about himself or America is met with the line (or part of the line) “American Women” from the Lenny Kravitz song. This bizarre running joke grew funnier every time Jonny hit the play button.

During the hour-long set, Zach’s character battles with his own ego as the audience warms up and begins to respond to Jack Tucker’s questions. Some jeers from audience members receive cheeky, flirtatious responses from Jack: “I’m married”, he says, winking and pointing to his ring finger. Despite his supposed marriage, he continues to berate his wife and his young boy (aged 34). Conversely, loud-mouthed, fiery heckles (and a couple of walk-outs) send Jack into emotional turmoil: “I’ve never been heckled before…it was going so well.” A single spotlight shines onto the comedian as moving piano music plays in the background. His self-indulgence is refreshingly and hilarious.

In a desperate plea to win over the crowd, Jack trials some well-known pop culture impressions. His ‘Marge Simpson’ is near to perfect with every line. However, his attempt at much-loved American delinquent, Homer Simpson, is met with playful boos from the audience.

In this 60-minute stand-up session, Jack discloses a detailed presentation of a comedian’s inner psyche. He seems touched by the standing ovation at the end of the show. Zach Zucker has triumphed in delivering yet another captivating and distinctive performance. Zach’s intricate bond with his director and sound technician makes Jack Tucker: Comedy Standup Hour an absurdly enthralling and stand-out act at this year’s Fringe. His character succeeds in satirising every stand-up comedian’s nightmare as they set out to entertain a crowd.