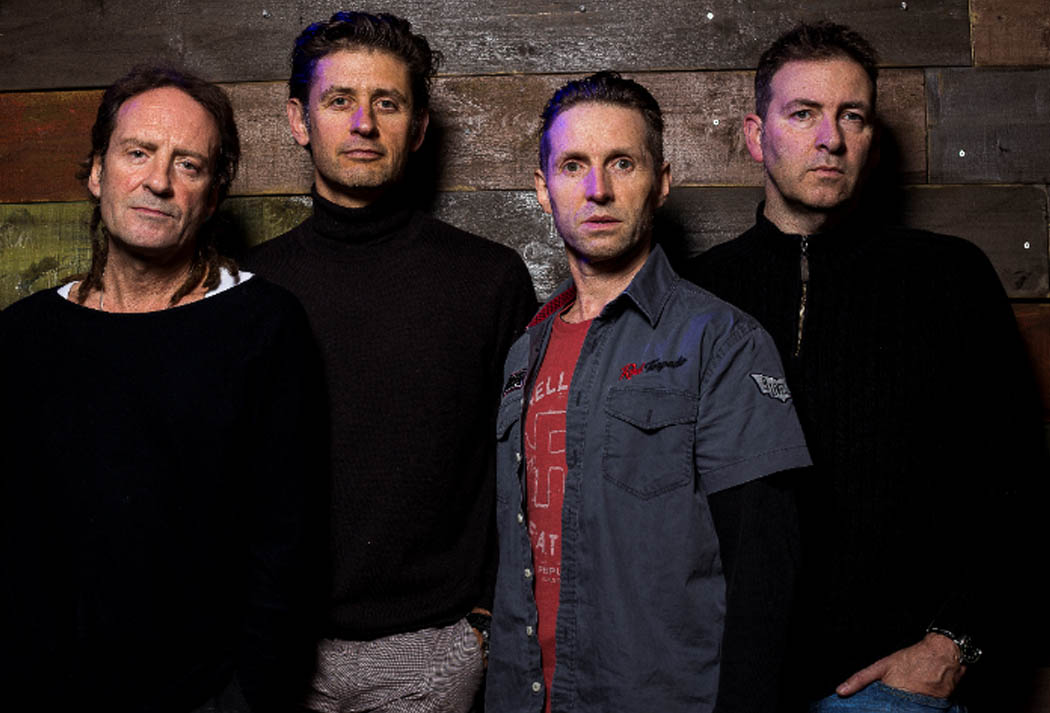 Formed at the end of 1988, Jesus Jones quickly established themselves as one of the most exciting and innovative acts of their time.

They were one of the first bands t successfully blend rock and dance music, using samples and beats over catchy, commercial pop songs. Catching the mood of the time perfectly, it wasn’t long before they started to enjoy worldwide success, signing to EMI, via the newly founded Food Records – later to be home to blur. Their first album, 1989’s Liquidizer with its singles Never Enough and Info Freako saw them tour the UK and Europe, wowing critics and fans with a high-energy live show that was to become the band’s trademark.

Within a year, things really started to happen. When it was first released, at the start of 1991, their second album, doubt, quickly became a phenomenon. It entered the UK charts at number one, and gave the band their first gold disc. It would also see massive sales around the world, including Canada (where it went platinum), as well as Japan and Australia. However, perhaps the album’s greatest success was in the US, where it went platinum, selling well in excess of a million copies.

This was driven by the single Right Here, Right Now, which was a huge MTV hit (it was, at the time, the longest-running video on their playlist, ever), and was on constant rotation at virtually every radio station across the country. The single reached number one, and still remains an anthem to this day. The album also spawned a number of other huge worldwide hits, including International Bright Young Thing, and Who? Where? Why? and the band were awarded an MTV award for “Best New Artist”, as well as being nominated for a Grammy.

The band toured doubt extensively, including two tours of the US, which sold out before the band had even boarded an airplane. The success of the album enabled them to play to 200,000 people in Brazil, at the Hollywood Rock Festival, to Support INXS at Wembley Stadium, and to appear on the Pyramid Stage at Glastonbury.

Their next album “Perverse” saw them explore the rock/dance crossover even more – and influence other emerging acts such as The Prodigy. Further albums followed in 1997 (Already), and 2001’s self-released London.

And now they’re back.  But talk of any sort of “reunion”, and they’ll point out that to reunite, you had to have called it a day, and that’s something they never did. They never actually split up. “There were no “musical differences”, no acrimonious breakup,” says keyboard player Iain Baker “No burnt bridges to repair, nothing like that at all – we’ve always been together”.

Fair point, so where have they been? Well, getting on with their lives, whilst their pioneering dance-rock outfit slumbered in the background. Singer and band leader Mike Edwards became a successful personal fitness trainer and professional cycle coach, bassist Alan played alongside ex-Mekon Jon Langford in Punk/Country crossover act The Waco Brothers in his new hometown of Chicago, keyboard player Iain forged a new career as a Radio DJ on Xfm and NME Radio, and guitarist Jerry busied himself as a professional artist.  They never stopped playing together; it was just that real life seemed to get in the way.

But, sometime, in 2004, with a change in management, and a newfound enthusiasm, they decided the time had come to fall in love with being in a band all over again. Since then, things have been very busy indeed – they released a brand new compilation of rarities and unheard tracks called The Collection – their first album release for almost ten years.

This was followed by a live DVD, celebrating the closure of the venue that gave them their big break, the iconic Bull & Gate pub in London’s Kentish Town. The band threw themselves back into touring, with tours of Australia, Japan, and the UK, as well as a select number of festivals. In 2014, each of the bands four EMI albums was reissued and expanded, delighting their fans with a huge amount of rare and unheard material.

After nearly three decades together, 2015 saw the band return with exactly the same line-up as when they formed – making them somewhat of a rarity amongst their contemporaries. As singer Mike Edwards explains: “it may be a bit of a cliché to say we do it for fun now, but it couldn’t be more apt – we’ve been friends and band mates for so long, that it just feels right, being onstage, all of us together, playing the songs that have shaped our lives – It’s a fantastic feeling!”

That enthusiasm certainly comes across whenever the band plays, as they still throw themselves around the stage with a manic energy that puts many younger bands to shame. And, not content with live appearances, they’re actively working on new material too, as a very relaxed Edwards explains: “I never thought I’d write another Jesus Jones album, but now we’re back playing live, songs are something that happen naturally, when you fire yourself up creatively. And, without the pressure, I’m thoroughly enjoying the whole process!”

Get your tickets here