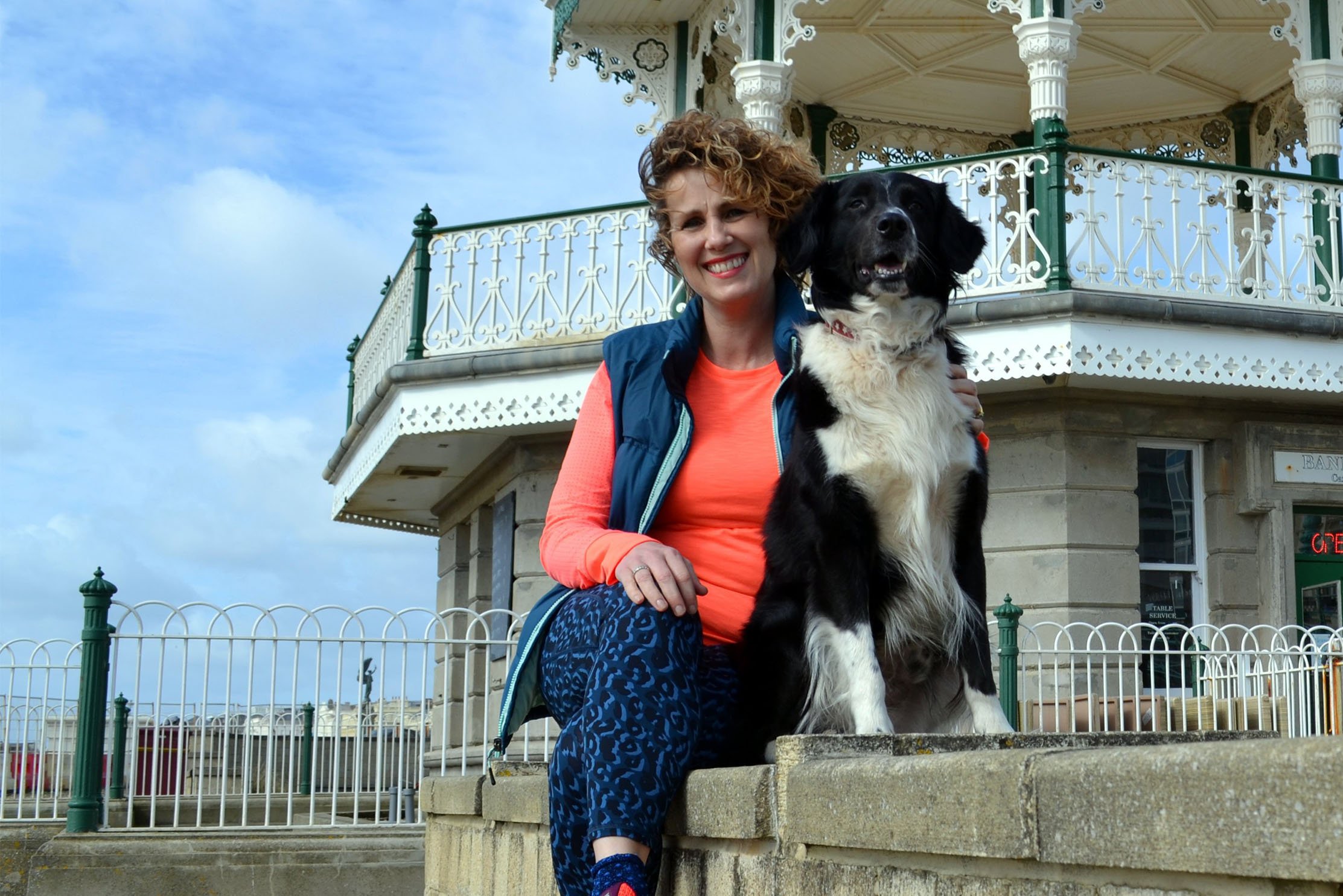 Brighton & Hove based author Josie Lloyd has written 15 bestselling novels (both as Josie Lloyd and Joanna Rees), including the hit Come Together, which she co-authored with her husband, Emlyn Rees. This was number one for 10 weeks, published in 27 languages and made into a Working Title film. Josie has also written several bestselling parodies with Emlyn, including We’re Going On A Bar Hunt.

In 2017, she was diagnosed with breast cancer. At the urging of a friend, she endeavoured to keep fit. Joining a running group on Brighton’s seafront, she found a community of women in a similar situation – who provided invaluable support and inspiration. The whole experience was so uplifting that it prompted her to create her compelling new book: The Cancer Ladies’ Running Club.

It revolves around Keira; a woman who has just received a breast cancer diagnosis. She doesn’t want to have to tell her children or husband, or even step back from work. She also doesn’t want to sit in a hospital and stare mortality in the face, nor be part of a group of fellow cancer patients. Cancer is not her club.

But Keira is forced to accept everything must change, and her health becomes something she can’t rely on. She embraces running, discovering a group of brilliant, funny women each going through treatment. One step at a time Keira is going to reclaim something. Her family, her business, her life.

With one in eight women getting breast cancer in the UK, Lloyd felt there were many issues around the disease which needed to be addressed. As such, The Cancer Ladies’ Running Club stands as a relatable message of positivity and hope. Moving and uplifting, this is a novel about love, family, and the power of finding your tribe.

With The Cancer Ladies’ Running Club seeing publication on Thurs 13 May, we spoke to Josie Lloyd about her experiences and attitudes. 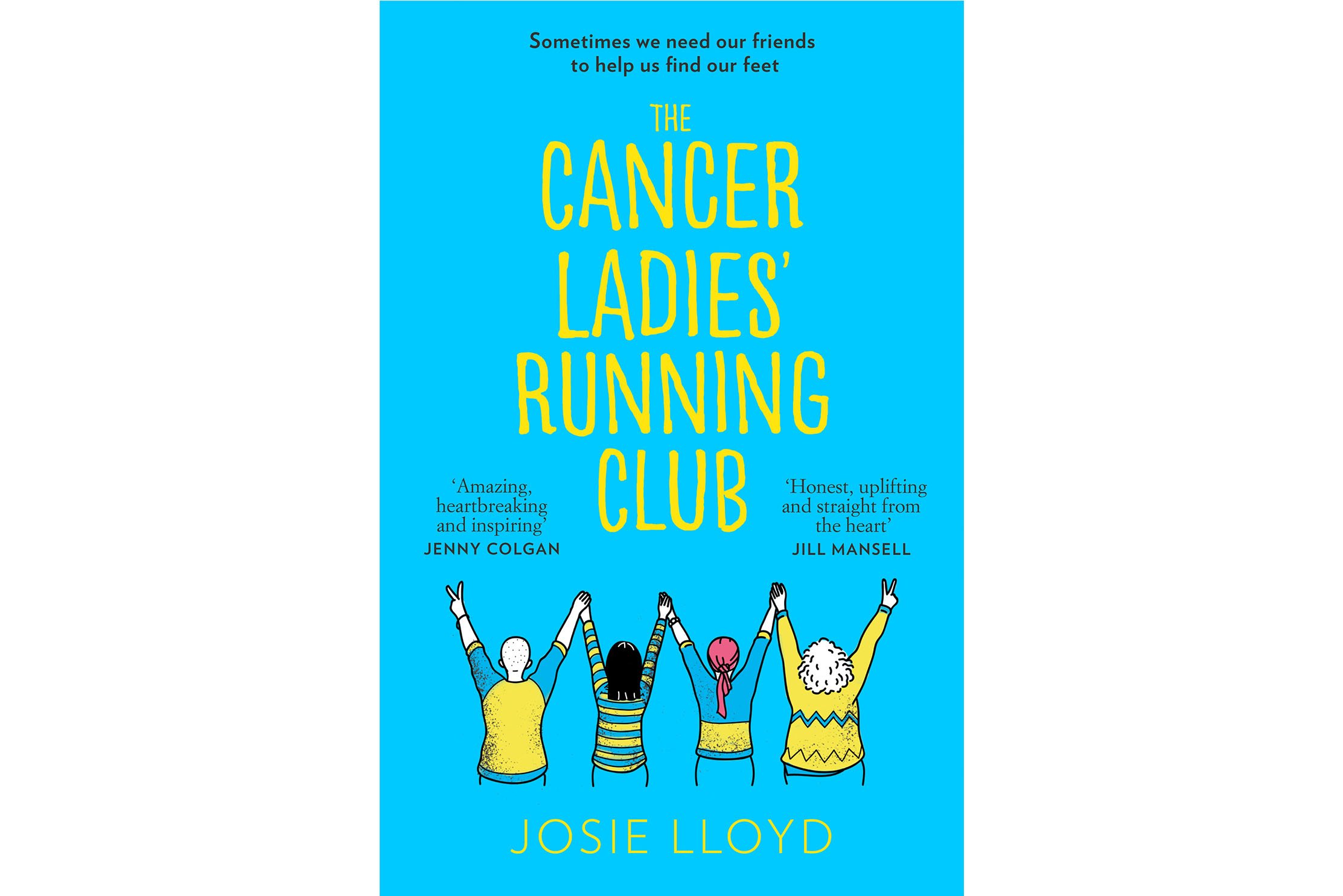 There’s an analogical link between enduring a series of testing circumstances and running. Either taking one step at a time, or one day, they can both be broken down into small, achievable goals. Was this something instantly apparent in your personal story, or did it only present itself when writing the book?

I discovered this particular fact when I ran my first (and only) marathon. It was the first Brighton Marathon and about five miles in, I suddenly had a eureka moment and realised that running a marathon and writing a novel were actually very similar. I thought ‘oh, I get this.’ Because you don’t think you’re ever going to be able to achieve it if you look at the big picture, so you have to concentrate on the little steps and eventually the distance gets covered.

When I started running during my cancer treatment, I very much used the ‘one step at a time’ mantra and focussed just on putting one foot in front of the other and this very much found its way into the novel. It was a very effective way of getting through cancer treatment.

Does finding inspiration in something so personal create a different set of values when writing a book?

Yes. I’ve written 15 novels, but this is by far and away the most personal one – and by far and away the biggest labour of love. Each novel tends to have its own process, but this one came about because when I was diagnosed with cancer, I kept a journal, which I found incredibly helpful. By the end of my treatment, I found myself with a detailed dairy of how I felt emotionally about what was happening to me. It was very personal, but I wanted to share it, as I felt very strongly that I wanted to do some debunking about cancer. I wanted to write something positive in the fiction arena that wasn’t all doom or gloom, because I couldn’t find anything out there and I’ve always found fiction so comforting and helpful.

I wrote a first draft, but my agent said it read too much like a memoir. So, I wrote it again making more of Keira and the characters, but my agent didn’t warm to that draft either. So I wrote the whole thing again, throwing out most of my own personal stuff and concentrating on Keira and her journey and her troubles at work and with her family. Then I was onto something. I wrote a further two drafts before I got to the book to how it is now, which, through this process really does feel like its own thing and now my story at all.

Did making The Cancer Ladies’ Running Club non-biographical give you a broader, and more powerful, voice through its protagonist?

Yes, because I was able to take a broader look at all the ways in which cancer can affect a person and their relationships with their family, spouse, kids, work colleagues and friends. I wanted to show a slice of Keira’s life and illustrate how, just because she has cancer, her life doesn’t stop. Because I wasn’t writing about me or my life I could show how she still has problems with her kids and problems at work, and that even with her husband, Tom, cancer is a huge test for them. 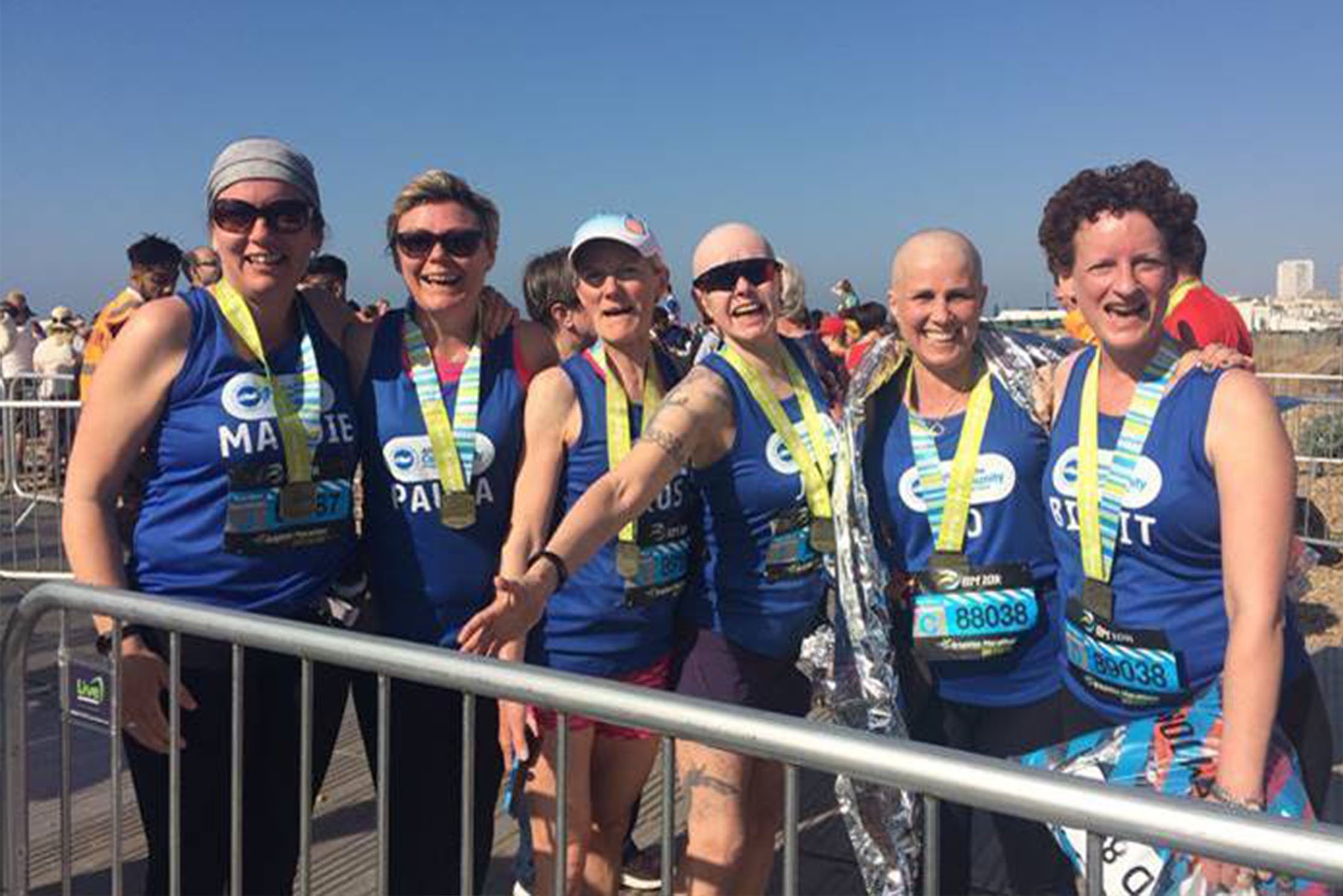 Was it crucial to match honesty with humour throughout the book, or are you a person who lives life like that anyway?

Absolutely crucial. One of the biggest motivators for me to write this book was that when I got cancer, I felt instantly labelled. I felt that all anyone could see me as was “someone with cancer”. And overnight, people started treating me differently and part of that was expecting me to be serious, when I’m someone who tries to find humour in any situation. When I met the group of runners on Brighton seafront who inspired this story, what instantly drew me to them was their gallows humour. The Ladies’ of the book’s title is meant to be tongue-in-cheek. There was nothing particularly ladylike about our running gang – or Keira’s.

Did writing the book help you contextualise some of the feelings thrown up by your own experiences?

Yes, it was very therapeutic to write, but it also feels like my own cancer journey is a very long time ago now, so I can really celebrate this book as its own thing. I haven’t shied away from writing the truth and the nitty-gritty details of what it’s like to be diagnosed, or to have an operation, or go through chemo, but I can stand back from those details now and be objective. Ultimately, the book is about positivity and hope.

Is there still a disinclination towards open discussions around cancer in this country? If so, how can we better address the issue?

BN1 Book Club: ‘Must’ Reads During Lockdown from our Team

Absolutely and this was my main motivation for getting The Cancer Ladies’ Running Club into the world. One in eight women get breast cancer in this country and one in two of us will get cancer in our lifetimes, so it’s a subject that affects us all. But many people – me included when it first happened to me – can barely say the word, ‘cancer’, let alone talk about it. But we need to start these conversations. We need to start making it less scary and get people to face up to it. Because it’s not all bad news. With our amazing cancer treatments, many people are not just ‘surviving’, but positively thriving as a result of going through it.

Has your experiences, both with cancer and with creating the book, shifted your opinion on the value of friendship?

There is nothing like the big slap in the face of cancer to wake you up and make you realise what’s important in life. I don’t think I could have got through cancer treatment without the support of my friends. My family were incredible, but my friends really kept me afloat. I felt that this book really had to be about friendship and the power we have to support one another. The older I get, the more I value my friendships – old, new and even the ones that happen only fleetingly.

It’s constantly implied that society is increasingly selfish, so is it perhaps more important than ever to amplify tiny moments of solidarity and kindness?

I agree, but in my experience – certainly with running and with cancer – most people are incredibly nice. When I was running the Brighton Marathon 10K, just before my 3rd chemo session, I was running bald and all these runners kept coming past me – women mainly – calling out ‘I’m clear, five years, keep going.’ ‘I’m clear, three years, keep going’. It was so powerful and uplifting. Then this one runner ran with me. She was the picture of health and told me that she had run all the way through her cancer treatment. Then on the last turn of the race, she’d waited for me. She told me that when she was at her lowest ebb, a woman in a cafe had approached her and had taken off a little necklace she was wearing with a silver butterfly on it and had given it to this runner, telling her to believe that her life would be better than ever the other side of cancer and that this was her little ‘butterfly of hope’. Then the runner took of the same necklace, saying she’d been wearing it for three years and it was now time to pass it one and she took it off and gave it to me, telling me it was now my little ‘butterfly of hope’. We had a hug and off she went. I never even knew her name. But this extraordinary moment of kindness and solidarity was really what inspired me to write the book. I still wear my little ‘butterfly of hope’ necklace every day. And I’m delighted that Posh Totty, the fabulous Brighton jeweller are making butterfly necklaces to go with the book.

Much of your work goes against the myth of the ‘perfect lifestyle’. Has this been a conscious effort?

There is no such thing as a perfect lifestyle as far as I’m concerned. Some of the wealthiest people I know are also the most miserable. What interests me is writing about characters who have a personal journey to go on. They often start out thinking they want one thing and then discover that they want something else entirely instead. For me, like many of my characters, what matters most at the end of the day is love and friendship.