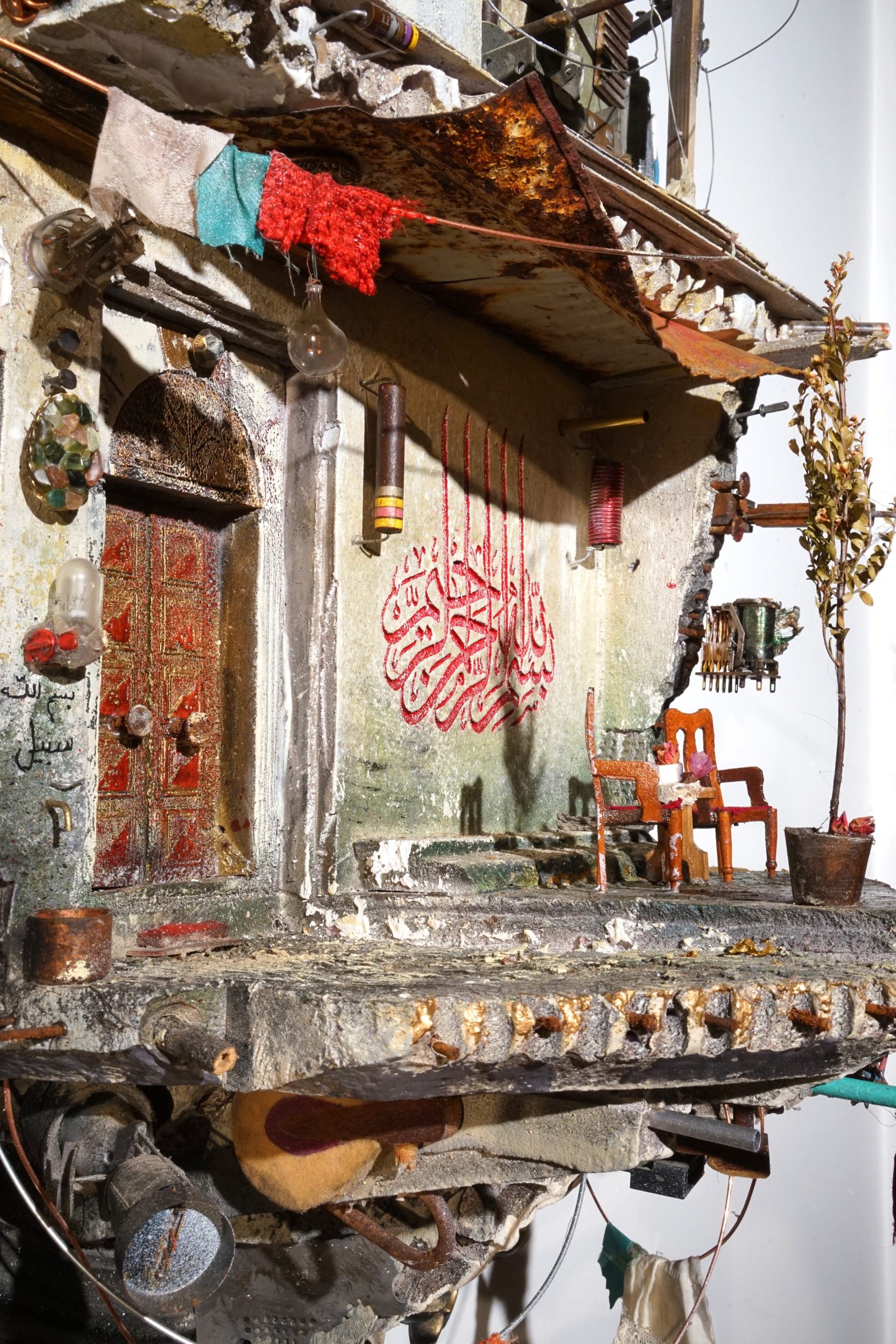 Born in Damascus, raised in the Kingdom of Saudi Arabia and educated in America’s Midwest, Mohamad Hafez is the epitome of a global citizen. But these travels have given him a burning need to connect with his home, a yearning which was magnified by finding himself temporarily exiled. In reaction, he started creating miniature cityscapes. Studying architecture at Iowa State University in 2003, he started using found objects to create intricate dioramas, combining a surreal view of the Middle Eastern streets from his childhood with a powerful humanistic message.

Many migrants suffer from cultural bereavement as the upheaval of leaving presses against a forced revaluation of identity. Hafez’s response was to literally build the homeland present in his dreams. “I had a lot of homesickness for Syria. My visa was originally stamped as single-entry only. So, I was stuck here for about eight years. I channelled my model making skills into making these sculptural pieces.” The works occupy a fascinating cross-disciplinary position, bringing together the intricate sculptural forms of architecture with the ad hoc aesthetics of street art. The comforting normality of city life contrasts with spray-painted revolutionary protest and juxtaposed moments of surrealism, creating an otherworldly snapshot of a place which seems real but may never have existed.

To reinforce the notion that memories are ours alone to take with us, many of the pieces are presented in suitcases – a perfect metaphor for migration and movement. “I’ve been very interested in physical and metaphorical baggage, and what people carry around with themselves, for a long time. The suitcase in itself is a very universal tool, which a lot of folks can relate to. You don’t have to go through a war to know what it feels like to live out of a bag. It’s a way to humanise without romanticising.”

He says exhibiting his work wasn’t an intentional end point in their creation. Along this journey, lots of friends would visit his home and admire the sculptures hanging on his wall. They would try to push him more and more, saying his endeavours need to be shared more widely. “I was too young to understand what therapeutic art was at that time. But I knew that it felt good and connected me to home.” At the height of the Syrian war, when members of his own family became refugees, he realised showing his art could work to humanise the conflict and tell a different narrative to the world, which wasn’t represented in the media.

“I’m interested in painting a picture which shows refugees come from established lives and have left something worth living for. It’s a very rich culture, and it’s meant a lot of hardship to leave. This is contrary to the narrative being portrayed for refugees, immigrants, and the region in general.” More recently, these reimaginings of his childhood Damascus have been influenced by the atrocities of the Syrian war. These miniature municipalities now capture the magnitude of the devastation in this hopeless conflict, and poignantly expose the fragility of existence. Now his works are being shown in the UK for the first time.

Running at Fabrica until Sun 29 May, as part of Brighton Festival, Journeys From An Absent Present To A Lost Past is both romantically nostalgic and potently political. Each of the pieces represents hundreds of hours’ work and, while being therapeutic in intent, they speak to a universal set of emotions. “I’m a heavy believer in the power of art. I believe it can reach much further than any rhetoric, to the right or the left. And if done properly, it can go to quite a deep level without anyone seeing it coming.” There are plenty of individuals who rely on creating a culture of fear to maintain power and popularity. Predominantly negative media coverage increasingly plays a role in generating intolerance towards all migrants, whether they’ve relocated for economic or educational needs, or been displaced by famine or war. Challenging the legitimacy of asylum seekers, or negatively portraying immigration’s impact on social and cultural structures is easy if you can dehumanise the people in question.

Hafez’s own experiences living in America, a nation often comfortable with ‘othering’ immigrants and refugees, has brought a new focus to his own experience with displacement. “A lot of the spicy rhetoric against immigrants, Arabs, Muslims and refugees comes from the United States. But if you look back, you realise it’s a country built by immigrants for immigrants.” This kind of history is often forgotten, especially when a nation is still trying to figure out its own identity. Compared to some civilisations, 300 years isn’t that long. There are doorknobs in downtown Damascus which are older than that. “If people realised some of their ancestors here in the United States might have undergone the same xenophobia that they’re making others go through, they would maybe think twice about doing it to other nationalities.”

He says the poisonous messaging is still very much out there, aided by the connections of technology. And if it’s not social media radicalising your angry cousin, there are authority figures happy to spread negative language for personal gain. “There are very powerful people who have been elected to the highest offices of the land based on that rhetoric. You can say crazy stuff on TV and people will still think you’re suited to be a leader.” There’s a lot to unpack, and a lot which intrigues him as an artist, and as somebody fascinated by culture, history and anthropology. Even with the war in Ukraine, a double standard has emerged for dealing with refugees of different ethnicities.

Perhaps what makes his sculptural work so compelling is how deliciously intersectional it is. It lets art, architecture and social history wash through in equal measures, informing each other and offering more than the sum of their parts. It doesn’t set out to be confrontational, but there’s an identifiable political edge. His background in architecture has allowed an understanding of how buildings can influence behaviours on a subconscious level. Although most of our built environment prioritises function over form, it can often be used to instil a sense of wonder or emotional attachment. “There’s a reason why you take a deep breath when going into a church. That’s a reaction to spatial qualities, design and light being used together. You can similarly grab people’s attention through similar harmonics, by appreciating beauty and detail. A lot of folks have mixed feelings. They say: ‘Your work is so beautiful, but it’s haunting and heart wrenching.’ There is something there to uncover. That luring of design and beauty.” Like architecture, art is something which similarly encourages audiences to use their own emotions to lend narrative or meaning to works. Successful buildings or art not only use form but materials to project beauty. Hafez’s use of abandoned and forgotten objects generates a further poignant resonance with the viewer.

The practice of creating these pieces is diametrically opposed to his day job. Instead of meticulous research and planning, he takes a more evolutionary approach. Often the sculptures will be constantly dismantled and adjusted, or even shelved for a while. The final product is less important than the process. “They’re very organically made. When you use found objects in this way, you can’t remember all the details. So, when you go to a piece after a month or two, you’ll have forgotten maybe 50% of the detail and look at it with a fresh eye.” Obviously, if you design buildings in this manner they might not even stand. But the lessons he’s learnt while designing skyscrapers and corporate headquarters around the world have unquestionably informed his work.

He was working in Lebanon on such a project when he last had the opportunity to cross the border and visit his hometown. This was a Damascus just before the revolution; distrust and unrest bubbling under the surface. “I began photographing daily life, as I had this feeling that it might be my last chance to capture it in such detail.” It’s a phenomenally varied city. Walking through the streets of the old city, you’ll see Roman columns rising only three metres above ground. The rest are buried deep below the streets, alongside a wealth of history. “It’s the oldest continually inhabited city in the world. Roman, Greek, Islamic, you name it, many civilisations came through that spot. That’s how culturally rich it is, and why I’m so in love with it.”

Stepping away from designing huge edifices to create something on a more personal level, Hafez’s new project is opening a café in New Haven, Connecticut. “There’s no shortage of contrasts in my life,” he admits. Here he’s creating another representation of his homeland. Customers are transported to the sights and tastes of the Mediterranean Middle East with French Baroque-style design and authentic food. The recipient of a 2018 Connecticut Arts Hero Award for his extensive and continuous body of work, he also serves as a 2018 Yale University Silliman College Fellow, Interpreter in Residence at U-Chicago Oriental Institute, and artist-in-residence at the Keller Center of Harris School of Public Policy, University of Chicago.

Art has taught him a lot about his identity, and maybe encouraged him to change over the last few years. The work has made him appreciate much about different cultures. He’s a self-confessed introvert and has possibly become more introverted recently. “I’ve zero interest in politics, but I am interested in human connections. I don’t really believe in doing art for the sake of beauty. It’s such a powerful tool to use, especially in today’s world.” For better or worse, his work goes beyond a simple exercise in form. It demands a discussion about the feelings it triggers: wonder, joy, belonging, hope, understanding.

Everything you need to know about Brighton Digital Festival 2018

The ambition for Journeys From An Absent Present To A Lost Past is for audiences to develop an appreciation of the culture he came from, and to be intrigued enough to learn more. We’re often confronted with a narrative that migrants can’t wait to leave their homes, or the only thing which distinguishes nations is war, bombs and destruction. “These lands are so rich, and it takes so much for people to ride the sea. Unless the sea is calmer and safer than the land, you would not risk the life of your child in a little dinghy across the Mediterranean.”

Migration is a complex subject, with numerous causes, experiences and influences. But it has inarguably contributed to the cultural richness of countries across the world. Those who undergo it experience multiple stresses, which impact their sense of identity and sometimes wellbeing. Hafez wants people to better appreciate his culture and its beauty. By understanding his family’s story perhaps everyone can start regarding immigrants as fellow humans. “I’m trying to build empathy in a very subtle way and find common denominators. Because if you establish these grounds between humans, you push back against nationalist xenophobic movements. That’s the best way that art can serve today’s world. We live in a very divided society, with lots of misinformation and fear of others. It’s my responsibility as an artist to bring people together.”

Mohamad Hafez’s Journeys From An Absent Present To A Lost Past is at Brighton’s Fabrica until Sun 29 May, as part of Brighton Festival.