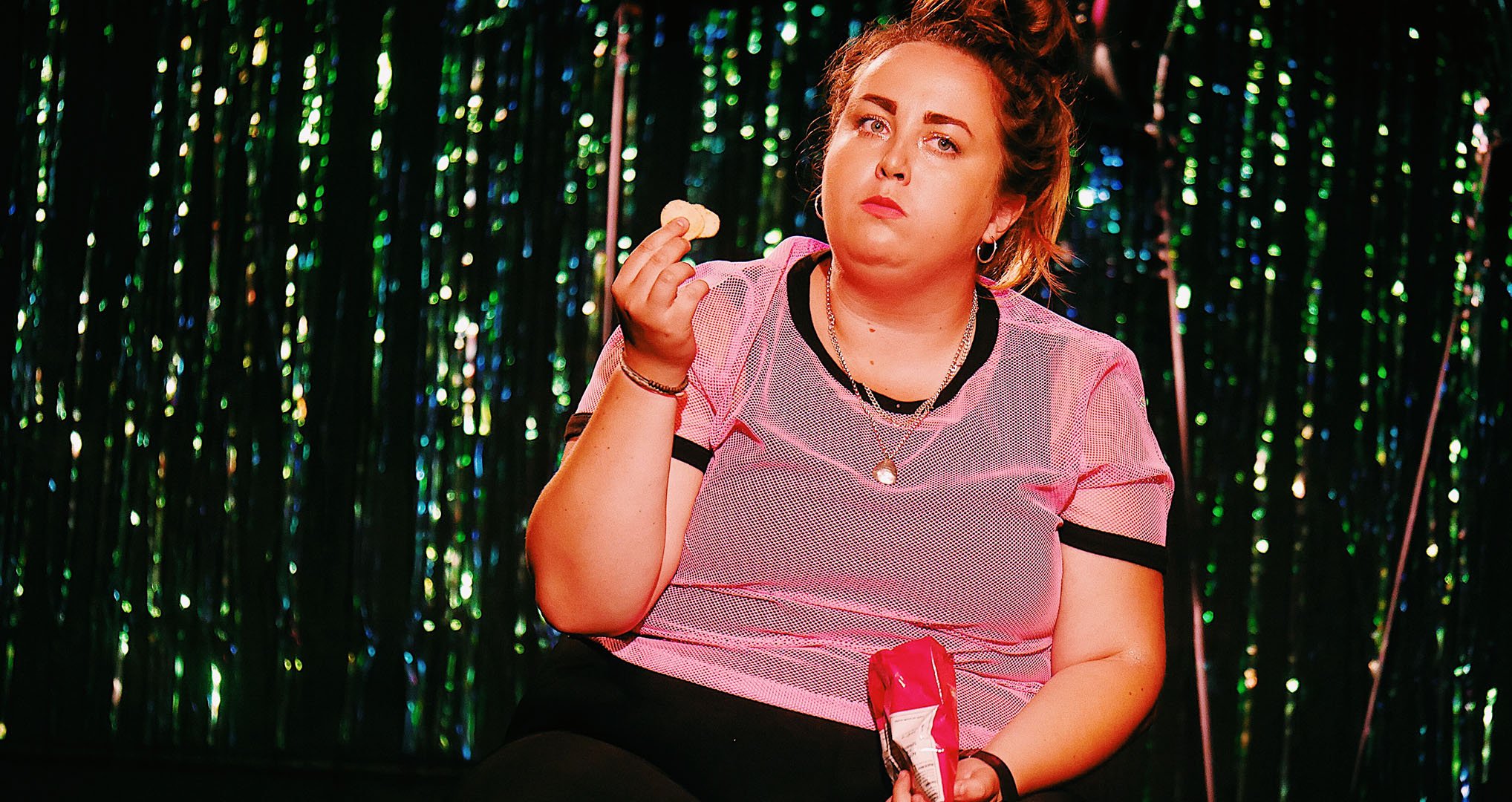 Katie Greenall is asking: ‘Do you ever feel like your body takes up too much space in world that doesn’t want to make any room?’ Her solo show, Fatty Fat Fat, offers a funny, frank and provocative look at living in a body the world tells you to hate. Leave your diet books at the door.

It forms part of Fat Pride, a season packed with performances, parties, workshops and an exhibition. Heading to Brighton’s Marlborough Theatre this April, Fat Pride is a joyous programme centred on celebrating fatness and fat bodies in all their glorious forms.

A London-based facilitator, theatre maker and spoken word artist currently living in London, Katie discovered writing by accident in attempt to manage the chaos in her head. Recently winning the National Youth Theatre Spoken Word competition and one of this year’s Resident Artists at the Roundhouse, Fatty Fat Fat is her first show.

We caught up with this innovative and challenging theatre-maker, to find out more about ‘body-positivity’ and how we need to shift our preconceptions.

What qualities do you look for when selecting material to go into the show?

I sort of made this show by accident.  In the last few years, I’ve began to realise a number of things that my body has been subject to, both verbally and physically, aren’t the norm. In an attempt to reclaim and process what it is to live in my body I want to make a show. These anecdotes form the backbone of the show, dissected with more interactive moments discussing wider fat activism and more poetic moments reflect the process of making the show, which felt important to include. The most important quality is that the material that is included in the show is safe for me to perform.

Is it still taboo to talk expressively about being fat? If so, why?

When you take up space publicly as a fat person, it can be really scary. Fatphobia is everywhere and consistently in the media. If you put yourself out there as a spokesperson for fatness in anyway, there immediately becomes a risk. Fat people are still harassed in public constantly and this can be much worse online. People are told to be scared of being fat, every time you post your before/after picture you are vilifying people who look me, every weight loss pill campaign shared feels personal and often the only fat people allowed a platform are ‘the right kind of fat’. It’s hugely tricky to navigate.

What do you think Brighton’s Fat Pride event can achieve?

To have a safe space dedicated to fat people is something extremely special. Having opportunities to surround yourself with people that look like you is invaluable when you’re a fat person and so the connections and safety created can be will be really special. The Marlborough have done something so important by creating a fat orientated space.

How can we engineer a faster evolution of body image perceptions?

That’s a huge question and a really tricky one to answer. I think things are slowly moving in the right direction, with fashion brands beginning to platform larger bodies and the media starting to make room for fat stories. But until we stop promoting weight loss, allowing the ‘body-positivity’ movement to be fronted by thin white women, creating a culture of fear around being fat and making obesity a scapegoat for much wider societal problems then things are always going to be slow to change.

Why are negative opinions towards body size still not treated in the same way as those based on race, religion or gender?

Because unlike these things fatness is not a protected characteristic and it’s not a protected because we live in a society where anything about our bodies is seen through a medical lens rather than a social one. Being fat is never seen as something that is permanent, it’s always associated with the want to notion it should be changed. Across the media we see consistently see negative opinions acting as a catalyst for change for the character to find love/achieve their potential/have a happy ending. Negative opinions and shame towards fat bodies is considered like the rest of the world is doing us a favour, rather than being deemed an act of aggression.

What’s the best thing to say, when you’ve been casually called ‘over-weight’ by someone?

To fuck off and mind their own business!

Do you want to give us some shout-outs to up and coming performers?

I think the space FAT Cabaret have made is something really special, support them and their performers! Chubrub and Smashlyn Munroe are particularly wonderful.

What’s the most fascinating element of the Cha Cha Slide?

You’ll have to come to the show and find out!