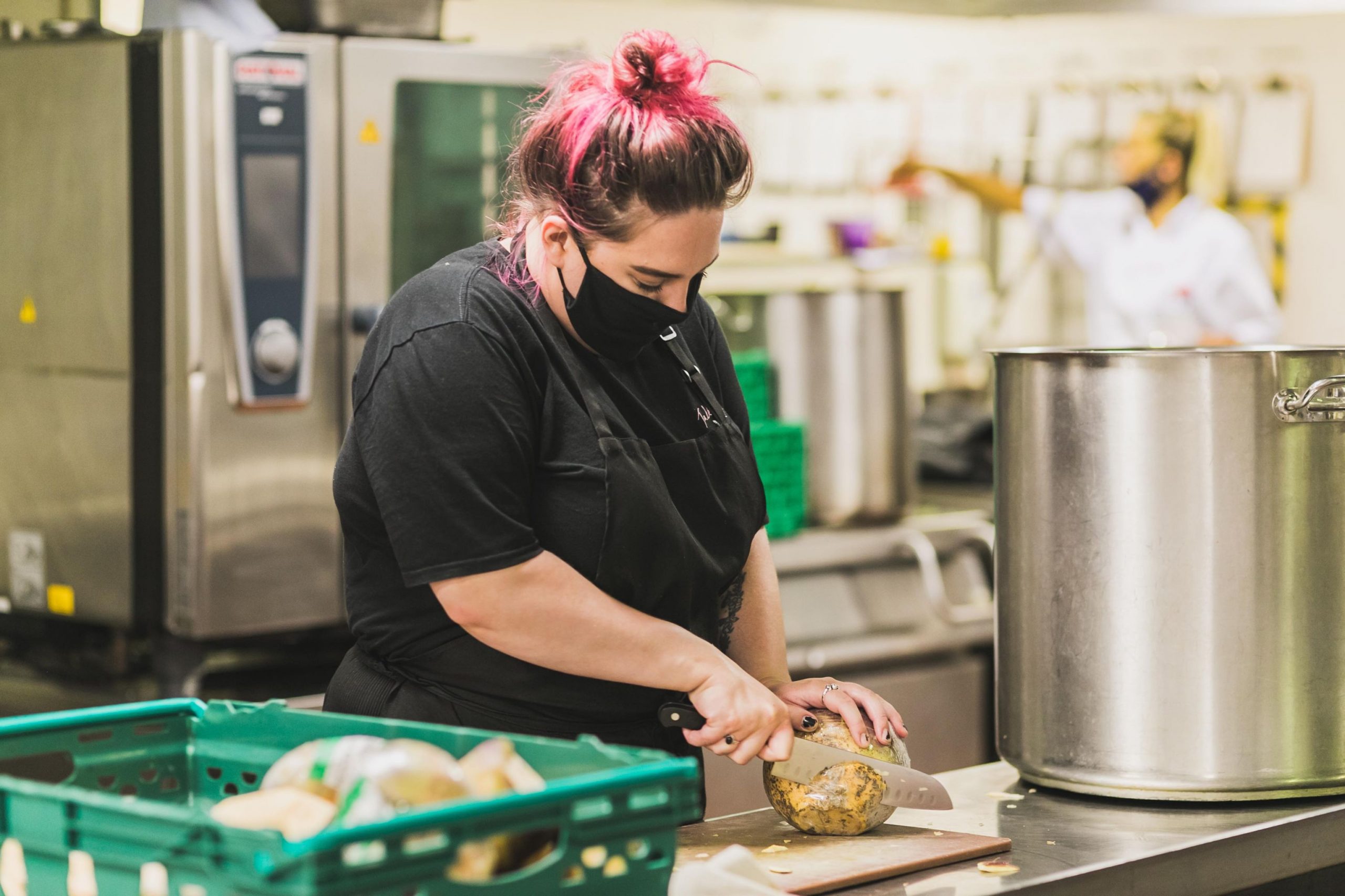 Brighton is home to the most beautiful, fabulous and inspiring people in the world, in my very unbiased opinion. This month I came across one such person whilst writing a piece about the Brightonians providing relief to those devastated by natural disasters in Haiti. The co-ordinator of this mighty effort was Edd Heller, a local chef who nourishes hundreds of Brightonians every day!

Edd operates The Ethicurean Guild, a food business which partners with some of Brighton’s best loved venues. For a number of years, he has delivered mouth-watering food to locals using the best produce they can get their hands on, whilst also helping to feed and employ the city’s most vulnerable residents via food banks and donations.

Before lockdown Edd’s kitchens donated up to 60 meals a night to those sheltering at the council in the SWEP (severe weather emergency protocol) shelter. This he did for over a year out of his own pocket, gently declining the council’s offer to pay – until coronavirus hit and propelled many people, from NHS workers to at-risk children, into crisis.

At the start of lockdown Edd and The Ethicurean Guild kicked things up a notch and approached the council to up-scale their operation in order to help the rapidly increasing number of people facing homelessness. Happily, they were awarded a council contract to do so, meaning they could provide hundreds of meals daily to homeless people in and around Brighton as part of the “All In” scheme. In the first three months of lockdown, The Ethicurean Guild produced over 130,000 meals for homeless Brightonians.

During the same period, they supported several food banks and provided them with hot and cold meals numbering in the tens of thousands. Every Monday, The Ethicurean Guild made around 20 meals for young adults at the YMCA, a tradition they have continued in their kitchen at The Stoneham, as well as offering up a jobs training programme for them. They also provided meals to soup kitchens, including one opened last winter by Edd and his team, and to children and families living in food poverty in connection with CHOMP.

A post shared by CdLS Hope For Hasti (@hopeforhasti)

They continue to feed homeless people around Brighton, and have also begun to employ and train those they have fed – as well as helping them to find homes through St’ Mungo’s and the Housing First programme. During lockdown the council and support networks such as St Mungos have helped at least 400 Brightonians find shelter… perhaps this is the covid-cloud silver lining we have all been looking for?

Edd wasn’t always able to provide for so many. In a raw and honest Twitter thread last Christmas, he opened up about his past, and his present motivations. 20 years ago, he ran into trouble supporting his own new family: “I stupidly, shamefully and regrettably committed fraud, I even ended up in prison for it.” After getting out, Edd couldn’t face returning home. Instead he lived on the streets of Liverpool, owning nothing but a scar on his face; a relic from his time in prison.

So how did that man become the Edd we know and love today, who does so much to support any and all vulnerable people around Brighton?

“I’m not sure how or when people change but about a decade ago I met my now wife, I came back to working in hospitality and I never looked back. I work hard, sometimes too hard, to make sure we have what we need.”

Edd seems to have a knack for giving a helping hand, exactly where it is needed. During the pandemic, NHS staff in covid wards were giving their all, working long days and often skipping lunch to carry on combating Covid-19. Edd went to one of these wards and, true to form, asked if The Ethicurean Guild could help by providing ready meals for staff. This simple act of kindness quickly escalated, to providing lunch and dinner to several wards and ambulance crews.

Knowing that the pandemic was not going to disappear overnight, and with NHS staff’s blessing, Edd set up a Go-Fund-Me page in order to raise money to support this meal programme for at least 3 months. Edd recounts how generous and inspiring the people of Brighton were, especially after he opened up about his past life over Christmas. Despite fears that his past might turn people away from his cause – the GoFundMe page raised £12,000 in donations, a further £4k was given from Critical NHS and (out of the blue) £500 from the police discretionary fund.

Edd, in yet another stroke of practical heroism, recognised that enormously generous as that was, it would be difficult to stretch that as far as 3 months – so his business picked up the rest of the costs (including full staff wages), matching what they had raised already so that every penny could be spent directly on the ingredients of 57,000 meals for our incredible NHS staff.

All-in,The Ethicurean Guild has produced over a quarter of a million meals during lockdown.

“It’s not my story, it’s not just me… I’ve been so lucky to have amazing people volunteer and join the business. It’s their story as much as mine, if not more.”

Edd is humble to the bone, and wanted to shout about his amazing team of staff and volunteers above all else.

Among them, Joe, a business student who joined Edd in 2019 while studying at Sussex. Not only was he “hands down one of the best members of staff he’s had”, but he was also the first member of staff to call Edd during lockdown with singular determination: “Edd, homeless are gonna need feeding, I’m not going home, I’ll stay in Brighton and cook with you for free if I have to.” *Swoon*. Joe graduated in June and has moved away – congratulations! – now Edd is determined to find another ‘Joe’!

Edd also wanted to thank Stu – who now runs an estate agency. Stu was furloughed during lockdown, and volunteered with Edd every day for 4 months! Lovely Fiona is yet another hero among us; a communities consultant and Jewish mother “with a need to feed people” who acts as chief volunteer wrangler – she literally can’t stop finding more people for Edd’s kitchens to feed! This includes NHS staff, who she touches base with weekly in case they need a “hug in the form of more meals”… something Edd thinks is a possibility this coming winter.

Fiona is the person to contact if you would like to work with Edd and The Ethicurean Guild – who are desperately in need of staff and volunteers alike before the winter season hits! They are always looking for people to get involved, to help serve soups, food and a listening ear. Provided they can find enough staff, The Ethicurean Guild will be kickstarting a new pastry project, be bringing back much-loved pizza project ‘Dough’, employing former homeless people at new Japanese restaurant ‘Fugu’ and will be reopening their winter soup kitchen again, which will start around November and run on selected weekday nights in central Brighton.

You can email Fiona at: [email protected]

Also – Grab one of The Ethicurean Guild’s delicious roasts every Sunday at The Bear on Lewes Road, and at The Stoneham in Hove. All proceeds go straight back into the running of the Guild, and so support the cities most vulnerable in the most delicious way possible!

Over the last year The Ethicurean Guild have donated meals or food to:

And several other small food banks that existed just during lockdown.

These are among the many incredible charities in Brighton tackling homelessness, helping refugees, and providing relief to young children and families who face food poverty. Any and all help is always welcome!