The next time you go down to Jubilee Library with your tail between your legs to drop off your overdue books, you may notice that there are some new faces adorning the windows of the building next door.

The next time you go down to Jubilee Library with your tail between your legs to drop off your overdue books, you may notice that there are some new faces adorning the windows of the building next door. The display heralds the upcoming opening of a venture that has been gathering steam since its lease was granted earlier this year. This is The Ledward Centre, a community and cultural centre for Brighton & Hove’s LGBTIQ+ communities and allies. Its bold vision has been germinating for years and it’s finally nearing the first phase of completion with the opening of a brand new café and event space. 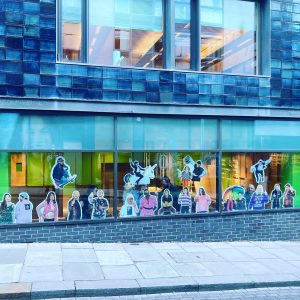 The Centre’s conception was made possible with the help of the Brighton Rainbow Fund, Brighton’s central LGBTIQ+ fundraising hub, which benefits from a range of events in and around Brighton, including August’s annual Pride parade. The fund was set up by Lib Dem Councillor Paul Elgood and the man whose name is given to the title of the Centre: James Ledward.

Before his untimely death in 2019, James was the editor of Gscene Magazine (now Scene Magazine) and spent his life tirelessly campaigning for improved treatment and visibility of LGBTIQ+ communities, including pushing for services for people with HIV in Brighton & Hove, raising funds for the Brighton AIDS Memorial ‘Tay’ in Kemptown, and helping to bring Pride from the brink of financial ruin to the powerhouse of fundraising it is now.

I went down for a guided tour of the work in progress with marketing communications volunteer, Daren Kay. It was a hive of activity, with the team busy at work as I came in, cutting out 20 near-life-size photos of representatives of the varied Ledward communities, ready to be hung in the window to greet the curious passer-by. The team, including the dashingly rainbow-bow-tied Henny the dog were all cheerful and welcoming in the midst of a controlled chaos of activity, the final push towards the upcoming PR campaign. 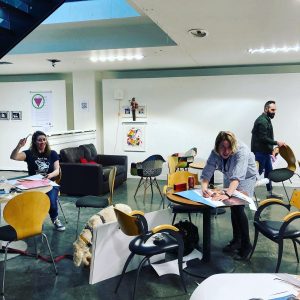 Daren led me through an airy foyer area that will house an LGBTIQ+ bookshop through to the café, which will soon be open to everyone and equipped with wifi, and will be an event space in the evenings. This is the area that looks out onto the street. We went back through the foyer and downstairs, which will play host to a range of different functions, including a fully accessible kitchen and 14-seat dining room available for groups to meet, socialise and dine.

“When we first started with The Ledward Centre,” Daren explained, “we undertook extensive consultation with many different communities so that we could gain an appreciation of their needs and aspirations. One thing that came back particularly from some of the more culturally diverse communities was that a lot of their meetings and events are focused around food, so they said, ‘could we have a space where we could have our meetings that could be centred around cooking?’ We wanted to make this happen.”

It’s clear that this is a venture focused on identifying and catering for the specific, often sidelined needs of people in marginalised communities in the larger LGBTIQ+ family, in a way that hasn’t been done before in Brighton & Hove. In terms of facilities, there will be a changing room, gender-neutral toilets, areas for queer families to bring their children and meet, as well as spaces for neurodivergent people to come to take a break from the overstimulation of the centre of town. 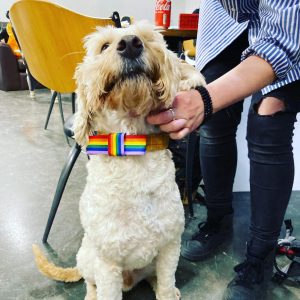 The lower floor has areas for community radio broadcasts, meeting rooms and a cinema that will show LGBTIQ+ films. It’s a real warren of facilities, resources and possibilities. There’s also a permanent gallery space, which at the moment hosts an exhibition by gallery partner, The Socially Engaged Art Salon (SEAS), called We Are Family. This displays images from all aspects of the queer world including nightlife, domestic life and activism. There are also some tantalising glimpses of the first ever Pride parade in Brighton in 1973 from Brighton Gay Past. These rediscovered photos from the Argus archive were never published at the time, and really highlight how far the city has come since then.

The next stage of the process is a campaign called ‘Make Your Mark’, which offers people the chance to literally become part of the Centre by helping to create a huge Progress Pride Flag in the reception area. When completed, it will measure 6 by 3 metres and will be created out of 6,500 individually handmade tiles, personalised with the mark of the donor. By donating a minimum of £20, you can choose which colour you want your tile to be in and you will be given your own grid reference to make it easy to locate in the finished piece. Donors are also asked to write something about what or for whom their tile is donated to be recorded in a physical book and on the website, creating a record of the lives of the LGBTIQ+ communities in Brighton and beyond. 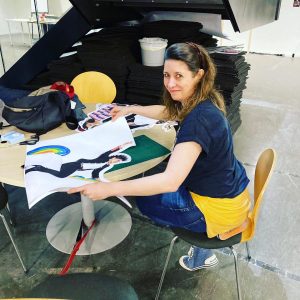 One of the faces of this campaign is Adam Ceramic, a finalist in Channel 4’s The Great Pottery Throw Down 2021, who happens to be a Brighton resident. He will be personally firing and glazing each tile. It’s clearly a project that’s very dear to his heart, as is the city he has recently adopted as his own. He sums up the importance of The Ledward Centre:

“As a young gay person, my dream of moving to Brighton represented freedom, acceptance, and a safe space to build a future. The Ledward Centre is a perfect symbol of why I love this city – a vibrant community where people help one another, creativity is encouraged and differences are celebrated. I would have had a happier youth just knowing that The Ledward Centre existed and as an adult I believe we should try to be the change we want to see.” 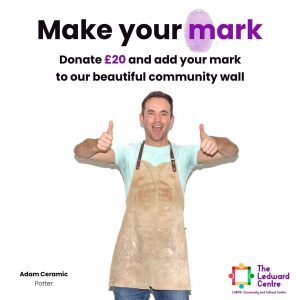 Brighton & Hove’s vibrant party landscape offers plenty of clubs, pubs and drag venues for people of all genders and sexualities to meet, dance and wander off into the night together, but for those wishing to avoid those environments – sometimes for reasons of sobriety – it can be difficult to meet people. The Ledward Centre is committed to being a sober space to accommodate everybody. With its range of facilities and resources and a passionate, dedicated team, it’s bound to become a haven for many – a truly safe space.

To ‘Make Your Mark’ navigate your way to The Ledward Centre website and donate a minimum of £20 via the campaign page (www.ledcen.org.uk/mym), arrange to have your mark immortalised, and become a permanent part of the Centre. The team are always on the lookout for volunteers, so get involved!