Film is a powerful medium. It can purvey a dazzling range of emotions and messages, all in a single frame. Local filmmaker Matthew Hellett is emphatic about the medium’s ability to help explore identities. “You can add your own journey and your own story,” he tells me. “It’s a way to express yourself and get your voice heard creatively. Actually, it’s more than that – through the media of film you can reach a lot of people and it’s showing the industry what we can achieve, and that we are just as important as any filmmaker.”

Hellett’s work beautifully explores LGBTQ+ and learning-disabled identities. His first film, a sardonic cookery show called Cooking With Matthew, stormed 2005’s Oska Bright Film Festival – winning the Best Overall Film Award. As an artist, he’s strived to make his voice heard, previously talking about being ‘a minority within a minority’. As such, it even more important that his craft, and the issues its platforming, are recognised. Too often, mainstream filmmaking can be a homogenised environment, with countless barriers to entry.

Now, the award-winning, Brighton-based artist has contributed to an exciting new anthology edited by Saba Salman – Made Possible: Stories of Success by People With Learning Disabilities — In Their Own Words. His contribution talks about Mrs Sparkle, a boisterous alter ego bringing out his rebellious and adventurous side. He also explores themes of sexuality, inclusivity and perception. “It’s important to me to show what learning-disabled people can achieve against the challenges of life and society.  Like it says in the song – ‘Life is a rollercoaster’ – sometimes you go up and sometimes you go down.” The book also sees him discuss how only 0.3% of the total film workforce are disabled, with 0.2% work in production. Conversely, over 13 million disabled people in the UK. It’s hard to ignore a disparity like this. His Made Possible chapter also gives honest perspectives on the difficulties of attracting honest criticism, ways of making the arts more inclusive and how venues could be more welcoming.

His success at Oska Bright led to a training bursary with its parent charity, Carousel. This facilitated his second film, Unusual Journey. Featured on Brighton & Hove City Council’s website, it was also played to an enormous crowd at Fat Boy Slim’s 2007 New Year’s Day show. It’s allowed him to flourish and find new ways of exploring identity. Soon after came Sparkle, a cinematic outing for his drag persona. “It did help me to identify the character Mrs Sparkle – I made two films and performed for about four years at a nightclub for people with learning disabilities, their friends, DJs and performers.” He’s now become the lead programmer at Oska Bright Film Festival. This biennial event and touring programme platforms short films and digital media which include people with a learning disability. 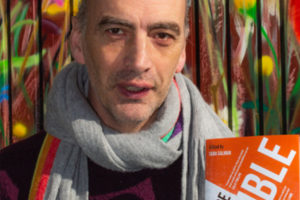 In 2017, Hellett launched a queer strand at the festival. This ground-breaking approach, along with his own work, has brought him worldwide acknowledgment. This, undoubtedly, has helped inspire him on a personal level. But he’s not letting the recognition affect him too much. “Some of my films have been picked up by film festivals around the world – which is really nice.  I try my best to focus on my own creativity and not think about it too much.”

On a creative front, his ambition is to do some theatre work, and hopefully make a new film. “I’ve storyboarded it… I’d also like to make a documentary, about when I came out as gay – it was really hard coming from a Catholic background, and society back then was less open.” Hellett continues to bring to life what can be done with the right platform, without focussing on the negatives. This success has helped him to develop self-esteem and confidence. But, will we see the fabulous Mrs Sparkle again? “Oh well who knows? I think so, but I’m not sure in what form it might take!  I would like to, but I don’t know how and when.  Watch this space!”

Matthew Hellett contributes towards Made Possible: Stories of Success by People With Learning Disabilities — In Their Own Words, which is available now from any decent bookstore

Find it on Amazon here

As cinemas start opening again, and new blockbuster movies come out, here is our list of best films you...

The Biggest Announcements from The DC FanDome Conference

With E3 cancelled this year, studios had to get creative with ways to announce their upcoming projects. Enter DC...

When Bob Marley Came To Britain screens on BBC Two

In the 1970s, Bob Marley rose from humble beginnings to become a global superstar. It was a journey that...