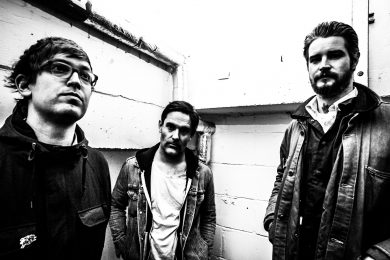 Up first were Crystal Palace based duo, JOHN (or if you’re searching for them on Spotify, JOHN (TIMESTWO) – confusing, I know) who’s filthy, overdriven guitars and splashy, thumping drums helped heat up the icy Chalk band room nicely. The room was full, but not packed when Metz took the stage just after 8:30pm – the earliest Friday night headline slot I can remember, which may have affected the numbers. However cold it was outside, the diehard’s hearts were soon warmed with The Swimmer from their second release aptly named II. With Alex Edkins’ fuzzy guitar and distant yet distinct vocals shouting at the audience, Chris Sloarch’s driving bass and Hayden Menzies’ flailing arms behind the kit, they launched into the jagged powerhouse Mess of Wires followed by Get Off and Spit it Out. Speaking of a mess of wires, Menzies’ arms may have been flailing a little too hard as a short break was needed to change over a broken snare drum. Cellophane, from their latest L.P release, Strange Peace, was a nice change of pace just after halfway through giving the fans the opportunity to have a dance and a sing-a-long – not what you’d normally expect from a night out with this band. They powered back into the more surging part of the set before Sloarch’s opening bass riff for the final track Acetate finally saw the stage divers promptly take their stand and chaos, albeit controlled, ensued.

All in all, it was a solid hour of pure, unadulterated, ear bashing (possibly tinnitus inducing) noise rock that left the loyal Brighton fans satiated but not stuffed.

FEET kick it up a notch at Latest Music Bar