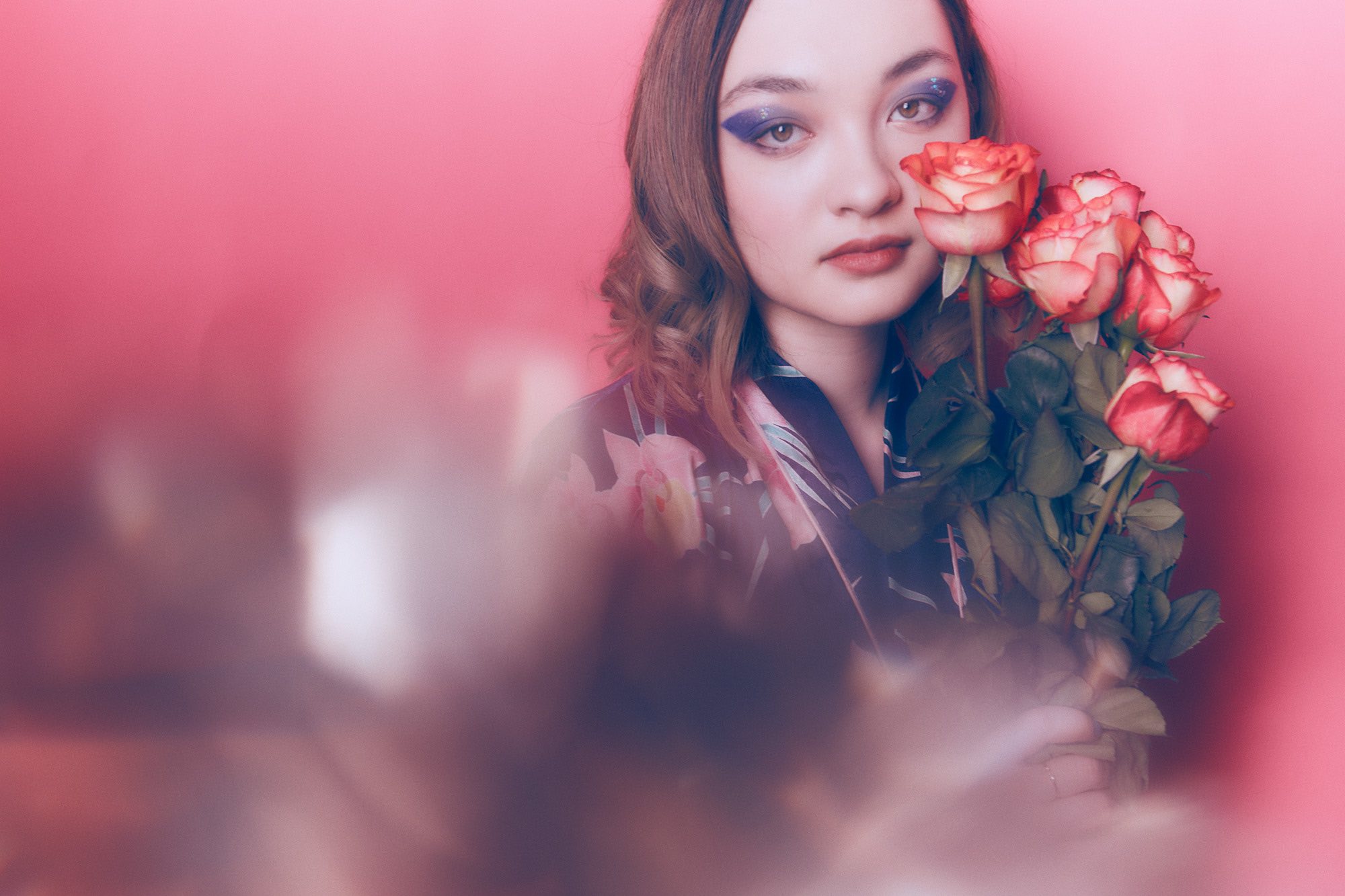 mxmtoon: “I’ve gotten better at taking a step back”

Not many people had heard of TikTok twelve months ago. In the UK alone, the short-form video-sharing app has soared to one million downloads per month this year alone. Following its predecessors such as Vine and musical.ly, TikTok invites users to lip-sync, dance or simply talk to their mobile phone camera for videos no longer than 60-seconds. The app is now the seventh most used app in the world, particularly with younger people.

One of the leaders of the cyber-savvy generation is American singer-songwriter, mxmtoon. Also known as Maia, she uses TikTok as a force for good, uploading videos almost daily to her two million followers. Her earnest, charismatic manner makes viewers instantly drawn to her, using the platform to offer her perspective on issues close to her heart, including Black Lives Matter and LGBTQ+ Pride. By speaking openly about her own experiences, she has found solidarity with her audiences.

Born at the beginning of the new millennium, mxmtoon has grown up immersed in music and was able to channel her creative curiosity through digital spaces. Although she is classically trained in the cello, she started uploading her DIY Garage Band songs under her YouTube alias mxmtoon in 2017. Fast-forward to the present day and mxmtoon has 5.5 million monthly listeners on Spotify and an extremely dedicated fan base.

Maia’s back catalogue is more than just catchy bedroom pop; it touches the hearts of her audience who resonate with her music. Her unapologetically honest lyricism has been likened to diary entries, presenting a quintessential voice of a new generation. Following the release of her debut album the masquerade last year, she has been embarking on an ambitious project in 2020. Not wanting to write another album immediately, the first of two EPs, dawn, signifies a new chapter for the singer. Released in April this year, mxmtoon diverted from her usual melancholic tones to focus on uplifting her listeners during the outbreak of Covid-19.

Yesterday, Maia celebrated the launch date of her sister EP, dusk, with a charming music video for brand new track ‘bon iver’. The delicate, dream-like guitar nods to the lo-fi folk sound of Sufjan Stevens, someone she has often cited as a musical influence growing up. Speaking ahead of her online performances at Brighton Pride’s digital festival, We Are FABULOSO, mxmtoon discusses her transition into the music industry and how she experienced growing up online.

Hi mxmtoon! What was the motivation behind challenging yourself to write two sister EPs for 2020, dawn and dusk – how will the second EP differ tonally?

I wanted to make two EPs that felt like they could explore the different sides of myself! Dawn is much more about trying to approach the optimistic side of myself and looking forward to the future. Dusk is focused on the introverted or lonely nature of life. The EP will take a deeper dive into being more introspective about the sadder aspects of our experiences!

The first track on your EP, ‘fever dream’, touches on taking a leap of faith into an unknown world. How has it been for you transitioning from the Internet realm into the music industry?


It’s been daunting but extremely rewarding! In many ways, I feel thankful that so much of my career can still be involved with the internet because it truly is my safe space, and bringing my music into a format like a live show was a definitely a scary process initially. However, live shows have become some of my favorite ways to interact with my audience. Nothing can compare to connecting with people face to face and hearing them sing your songs.

Being classically trained in cello, do you have any intentions to revisit the instrument or incorporate classical music styles in your future projects?

One hundred percent! I have such a soft spot for classical music and the strings in particular. I still pick up my cello on occasion to play it and see if I remember anything, and usually fail at doing so… but it hasn’t discouraged me from adding string elements in future songs that people will hear! Thankfully I can now reach out to other string artists to help me out with cello or violin parts!

I totally wanted to be a YouTuber growing up. It was my dream to have creative control over my job and get to share that with the world! Yet, I think the main reason I appreciated a platform like YouTube or a newer one like TikTok is really because of who you see using such platforms. YouTube broadened my understanding of experiences and helped me not feel so alone in my experiences or feelings. This ended up being the ethos of my music project, and something I try to do with all the art or content I make now! Without YouTube, I don’t know if I would know what it means to connect with an audience person to person.

You write about your lived experiences as a bisexual woman of colour both in your music and on social media. How do you think these mediums differ in instigating positive social change?

I think music is something that can be more objective and up to interpretation. The art I make about my identity is definitely meant to cater to a multitude of stories and fit the lives of multiple people. Posting on social media about my identity and social issues is a lot more specified to who I am as a person. I think the two definitely work in tandem with one another in helping not only express my story so far but giving others to bravery and courage to tell their own.

Who did you look up to in the mainstream media growing up that you felt represented aspects of yourself?

I loved Asian YouTubers a lot. I didn’t have a lot of people that looked like me in mainstream media growing up, so I loved channels like WongFu Productions or NigaHiga. There still wasn’t a lot of mixed race or bisexual representation though, so I gravitated towards the elements that felt most familiar!

Your 2019 album the masquerade has a running motif of identity, particularly in the song ‘prom dress’: “I keep collections of masks upon my wall,/To try and stop myself from revealing it all” – how do you know where to draw the line between your public and personal life?

I’m admittedly still learning. It’s a hard thing to have your relationship with the internet practically change overnight. I went from posting for ten people to having millions pay attention to be within the course of a year. I’m used to a certain level of involvement and honesty with my platforms that’s from how I used them when I had a smaller audience, so adjusting to fit the number I currently have has been a process. If it ever feels like too much though, I’ve gotten better at taking a step back.

Lots of people find it difficult to ignore negative comments made towards them on social media. How do you switch off from Internet trolls?

There are days where the negative comments seem to be louder in my head than the nice ones, and I think negativity has the chance to impact any person harshly when they hear it. I try to distance myself from the negative comments by reminding myself that the plain spiteful ones I receive are not a reflection on me, but rather on the person who took the time to be hateful.

Your performance will be featuring in Brighton Pride’s We Are FABULSO Digital Festival this year. How did you select the songs to perform as part of this event?

I feel like all three songs are representative of who I am as an artist! ‘prom dress’ is obviously one of my most notable songs, so I feel like that really defined an era of my career. ‘no faker was the start of the dawn era and the first time that I really tried writing optimistic songs. almost home’ was the last track on dawn and feels like the perfect transition into the next chapter of dusk.

How would you advise allies of the community to continue the conversation around LGBTQ+ rights outside of Pride month and festivals?

Share your story! If you feel brave enough to speak your truth and talk about your path, I think that inspires other people to live authentically and to be bold. If you’re not a member of the LGBTQ+ community, but just an ally, then active listening and lifting up the stories of people who are is one of the best things you can do as well.


mxmtoon will be performing at We Are FABULOSO. The Brighton & Hove Pride digital event 31st July – 2nd August raising money for The Brighton Rainbow Fund.

You can watch the performances over the course of the weekend on their YouTube channel: https://www.youtube.com/PrideTvNetwork

‘dawn’ by mxmtoon is out on 1st October, available on all major platforms.