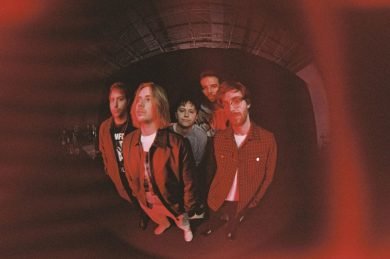 Nothing But Thieves craft one of the most sonically impressive rock albums of all time, and cement themselves as indie rock gods.

Nothing But thieves have always been a band with a select few incredible bangers under their arms, but frustratingly no great albums. However, with the release of their new album Moral Panic, the Essex boys have finally managed to craft a classic (almost perfect) album.

From the very opening track, Unperson ‘Thieves set a loud industrial rockfish tone, one that is far more experimental than any of their previous work. Explosive synth basslines buzz throughout the verses and are replaced by chugging guitars in the chorus. This song feels like if Twenty-One Pilots made a Bring Me the Horizon track.

Luckily for us, the chugging guitars continue for most of the album like in the next song Is Everybody Going Crazy? The first single to be released before the album’s release and arguably one of the best songs on the album. Frontman Connor Mason sings about “going crazy” and asks if it normal for him to be going through a struggle. Is Everybody Going Crazy? is the perfect post-lockdown song written in a pre-lockdown world.

Can You Afford to Be An Individual? fits perfectly with these big bombastic bangers, building and hissing before slapping the listener with one of the sugary-sweet-sexy guitar riffs in recent memory. And with anti-establishment messages laced throughout the lyrics like political headlice, the band dip their toes in the pool of punk and it pays off incredibly.

Nothing but Thieves aren’t scared of experimenting throughout the 40 minute run time of this album, with the song Phobia twisting and turning through different sounds and time signatures, at times sounding like Enter Shikari B side, or even a Muse – 2nd Law song (if 2nd law was any good).

At points, Moral Panic feels warm and nostalgic, sort of like the musical equivalent of a hug from the guy from art attack. This Sounds Like The End sounds like an old school Thieves song from one of their first albums. However, the real nostalgia comes out in tunes like Free If We Want It and Impossible, both tunes sounding like an early 2000’s rock hit, think Chasing Car/ Humans.

Impossible is arguably Nothing But Thieves greatest song to date. A beautifully crafted anthemic heart jerking rock song that hits the soul in right the right ways, missing out on this song should be a crime.

Despite being close to it, Moral Panic just misses out on being a perfect album. The title track and There Was Sun whilst being perfectly adequate tunes leave a lot to be desired, these songs would have been better found on their previous EP or as bonus tracks. But all is forgiven because of beautiful final track Before We Drift Away, a song that isn’t scared to take its time and build up into the crescendos that bring in anthemic violins, horns and loud crashing guitars.

It took some while, but luckily Nothing But Thieves have finally become the incredible, genre-changing rock band they always had the capability to be; do not miss this album.