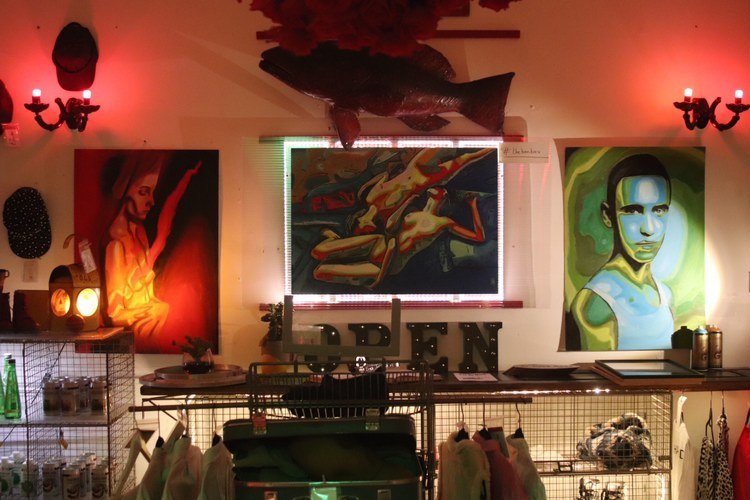 Coming down from Redding to work in local coffee shops 3 years ago, the now 27-year-old artist Ben, aka BenBox, found solace in his creative process. He uses apps to edit his yet-to-be-immortalised characters, exploiting face swapping and gender swapping apps as well as simpler changes like contrasts and colours. In his excited tone he says “I started putting it into that and then putting it in a different program etc… Using technology to create faces that don’t even really exist. Because you over edited them so much that you start creating new characters and there’s something so fascinating about that.”

Ben grew up in Maidenhead, between Windsor and Slough, creating as he amusingly says “The perfect balance of very rich families and very poor families and somewhere in the middle there was that perfect place between it. I remember growing up with friends that had massive houses and I’d be growing up just at my mums in this tiny box room. The weird thing is that it was only when I got older that I realised. I was like, “All my friends are fucking loaded!”’

He started doodling with pens until he came to Brighton and found his passion for oil painting. When talking about moving to Brighton he was also happy to highlight the low social pressure “I mean you could do that anywhere, but the difference is you’ll probably have to deal with a bit more hassle about it but here it’s kind of outnumbered because most people dress however they want anyway.” Which is part of his brand, BenBox signifying the way he approaches art. As he sees inspiration as the key to creativity. Being a former beat-boxer he likes to switch between music and art to find inspiration. This is where the name comes from, even if he assumes that “BenBox” would probably not be a great name for a beat-boxer.

“The name actually comes from my cousin who has down’s syndrome. He really loves music. He also does beat-boxing, and he responded so well to that and then started calling me BennBox, and I was like ‘that’s a solid name man!’ Then I was like: ‘alright let’s do it!’”

Ben’s latest exhibition “Covid19th Birthday” took place at the Marwood following the first national Lock-Down. “All the paintings were inspired by what was happening at that time, hence having painting called ‘flu like symptoms’, ‘stay home’, ‘save lives’, ‘vaccine’. I intended the style to be creepy and very comical in nature, the idea was for people to see a different light on what was happening, to learn without judgement, to evaluate information by feeling and not thinking.”

The exhibition was also the first part of a bigger project. When talking about ‘Technical Solutions’ he expanded on the link between them. “They both have influences from each other. Like, I was talking about technology in Covid19th birthday. I made the painting ‘Technical Difficulties’ at the time and the new exhibition is called ‘Technical Solutions’. So, it’s meant to be like a next chapter and that’s why there will be things like ‘Covid’s Awakening’ and the different transitions that are happening. You know, we’ve been in this for a while, and now we are adapting differently to the conditions that are being given to us.”

“I think there’s something about technology glitching which is a form of abstract art. There’s a huge community of people that do glitch art, but it’s all based on using programs, so it’s all digital. I want to use that inspiration for painting.”

It is likely that his face will seem familiar if you live in Brighton. You’ve probably seen him on the sea front where he exhibits his paintings, or on the walls in Marwood’s where he made your coffee, or maybe just cycling around on his orange bike. Ben sees a sunny day as a great way to display his art. He doesn’t believe in unreachable art galleries as a way to get attention.

“The opportunity is there every day to show your art. If you want lots of people to view your stuff just go where lots of people are. There are hundreds of people going up and down Hove lawns. If a few people come and chat to me then that’s great. I think it’s nice to meet people in person.”

If you want to view his art, he is getting involved in the Seven Dials area. Where you might cross by him in the park, or you could walk into Red Snapper to pick up a print and a take away.