Pieces of a Man interview – not a typical soul band

Catching up on Game of Thrones in your onesie, whilst tucking into cheese on toast at four in the afternoon isn’t really the image that pops into your head when you think about the life of soul musician. Or at least, not in my head. But that’s just the point, there shouldn’t be just one image of what a soul musician can be, explains Tolu, the chirpy singer and frontman of genre-breaking band Pieces of a Man, as he cooks dinner. “There’s this sort of mentality about what a soul musician is meant to be, and how people in urban music are meant to present themselves. The idea that they’re meant to have the money, and the bling and the women, and the power. We don’t really have any of that,” he laughs. “We don’t look like a typical soul band. And that’s OK.”

The synthy R&B fused seven-piece, and BBC Introducing alum, have just released their debut single Nothing To Lose, a poignant song about comradery and living as one’s authentic self. Inspired by the harrowing mass shooting of Florida’s Pulse nightclub in 2016, and The Clark Sisters’ song of the same name, the track goes deep into themes of identity and what makes a community. The message of the song has become an overarching metaphor for the band. “The whole song is essentially about this idea that we need to start striving for this world where we can all just be. And this idea of  trying to shift away from material things and aesthetics, and lean more towards things like passion and character. It’s just nice, this sort of utopian ideal of just to be yourself unapologetically and still be able to get on with people.”

The song came around after Tolu took the band’s saxophonist Pills to a solidarity vigil in Manchester, for the victims of the horrific events that happened at pulse – something that hit home with Tolu. “It did affect a lot of us, even though I’m the only person that is LGBTQIAPP+ in the band. it affected the whole community, my whole community, which in effect is theirs because we are basically like a family in the band,” he explains. Much of the song was directly inspired by the incredible solidarity Tolu saw on that day. “There were accounts from people who had survived it and what had happened. And it happened that people were holding up their torches and phone lights in order to get other people to safety. Despite the fact that would identify them and could potentially make them unsafe. It’s a really really powerful allegory for how marginalised communities tend to stick up for each other, like ‘even at my detriment, I’m going to stick myself out here to make sure we all make it.’ That was a really powerful thing, so that’s where the song came from.”

Echoing the account of Trayvon Martin – a teenager that was killed for wearing his hood, and laced with the black lives matter movement, the song weaves together themes of identity and injustice. But the main crux of the song exists from the  individual stories of the many musicians involved, and was very open to their interpretations. “We knew it was risky, letting people run with their emotions and stuff,” Tolu confesses.  “But It was important to let people be, because that is the message of the song.” Most notably, the end of the song gives way to legendary producer Amp Fiddler’s incredible wailing, as he grieves the loss of his son – a verse that was only ever meant to exist as a chant alongside the originally short hook, but ended up kickstarting the whole track. “It was instrumental that people were allowed to do their own thing, because otherwise if we had put restrictions on it, Amp may not have shared that story and that verse. It transformed the track into a very spiritual praise and worship session.”

Having seen airplay on BBC one Xtra recently, the track features friend and X-Factor alum Misha B, and was also remixed by the likes of producer Zed Bias. As the once Coronation Street actor Tolu explained, there was a real sense of freedom to the track’s creation. With musicians like Misha joining in on the recording at the studio out of pure luck or coincidence, the theme of comradery truly transcended the lyrics of the song. “She was making music at the time so she just in the studio a lot, and it felt natural for her to be there,” Tolu explains.

Swiftly following the single, the band also have a debut album in the works that really dives into the community feeling. Set to release on Fri 12 July, Made In Pieces knits together each band members influences and their diversity to build a sound that can represent their individual communities. But why is it called made in pieces? “Because it was made in pieces,’ Tolu jokes. “There’s Just a load of all these different influences and all those different pieces that make this record, and this sound that we have, and this community that we have. It’s very symbolic of where we are at in terms of life but also in terms of our musicality.”

Tolu in particular takes much of his style from Michael Jackson; a musician that has dominated his CD collection since childhood. And much of his music can be heard across the band’s upcoming album. Particularly, Black or white has been ingrained in Tolu, shaping his identity from a very young age. “In a world where i grew up in a white majority town, I need to hear that it doesn’t matter that I’m a black guy trying to exist in this very white community,” he confesses. “The idea that, underneath this skin, we’re all made up of the same tendons, the same muscles, the same red blood, that’s helpful imagery for a kid growing up.”

The band may have their diversities, and an entirely different line up, back when they first formed as a five piece in 2013, but the story behind their name has always been a staple. Upon hearing of the death of the godfather of hip-hop, Gil Scott-heron, the band adopted the name of artist’s debut album as a homage. “Pills coined the band name,” Tolu tells me. “And, it just so happened that Gil Scott-heron is massively influential to each one of us. That whole album, every single track speaks volumes on life now, even though it was released a while back. It even has a very similar metaphor and allegory of what we’re about in terms of breaking things like relations, experiences and identity down on that atomic level, and finding out what makes us.” 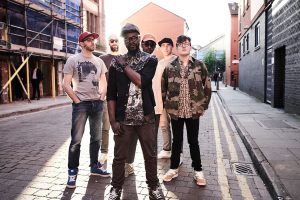 The track has been one of Tolu’s favourite records throughout the years, and struck a chord with his own story of growing up in a Christian family. “The song is so simple, but so powerful.” he explains. “even the way he sings it, his voice is strained and you can hear the emotion in his singing. It’s a beautiful record. He’s singing about his dad coming back, and at the end, he’s just wailing ‘i saw him go to pieces. I saw him go to pieces. He was such a good man’. That for me really resonates, because i spent so much of my life trying not to do that – not to go to pieces. I was always told ‘don’t hang your dirty laundry out, keep yourself to yourself’, and that to let anybody see any elements of you is not good. That’s just how i was raised, and that’s just how society tells us to be. Even now, mental health is still heavily stigmatised. We’ve all been there, we all have dark bits of ourselves. We have some great bits of ourselves as well. But to be authentically out there in your brokenness is a really strong powerful image. And the song ends on that, it doesn’t have a happy ending. For me, the whole song is a win, because to be that truthful and honest is exactly what we need.”

Along with the new album, the band are also gearing up for a show on Brighton’s beach in May. “This Funk and Soul Weekend has been on our list just to go to as a punter, never mind playing it, so it should be really fun,” he enthuses. “Soul’s become this sort of niche genre in some respects, with regards to the mainstream. You’ve got trevor nelson, and people bringing it up that are household names, but generally soul isn’t really one that people pay attention to as a first port of call. So we’re really excited to be playing at a Festival dedicated to soul.”

Given the chance, the band would also love to be able to perform at Brighton’s Love Supreme Festival, where they would debut their upcoming cover song – a release that is kept secret by the cheerful singer. “You’ll just have to come down to the Funk and Soul Festival to find out what song it’ll be,” he jokes.

Pieces of a Man play Soundcrash’s Funk and Soul Weekender in Brighton, on Sat 18 May 2019. Their album Made In Pieces is released on Fri 12 July.

Tanzanian-born and London-based, singer, songwriter and producer, Tiggs Da Author, will be setting UK music alight this month with...

SHRINK, aka Sam Breathwick, made his debut last month with the breakout single Drowning. It saw him paired with...

In a first for Brighton and Hove, Platform B launches a brand new youth-led breakfast radio show to empower...

After a ferocious start to 2020, which saw the band land a top 15 album chart position with their...