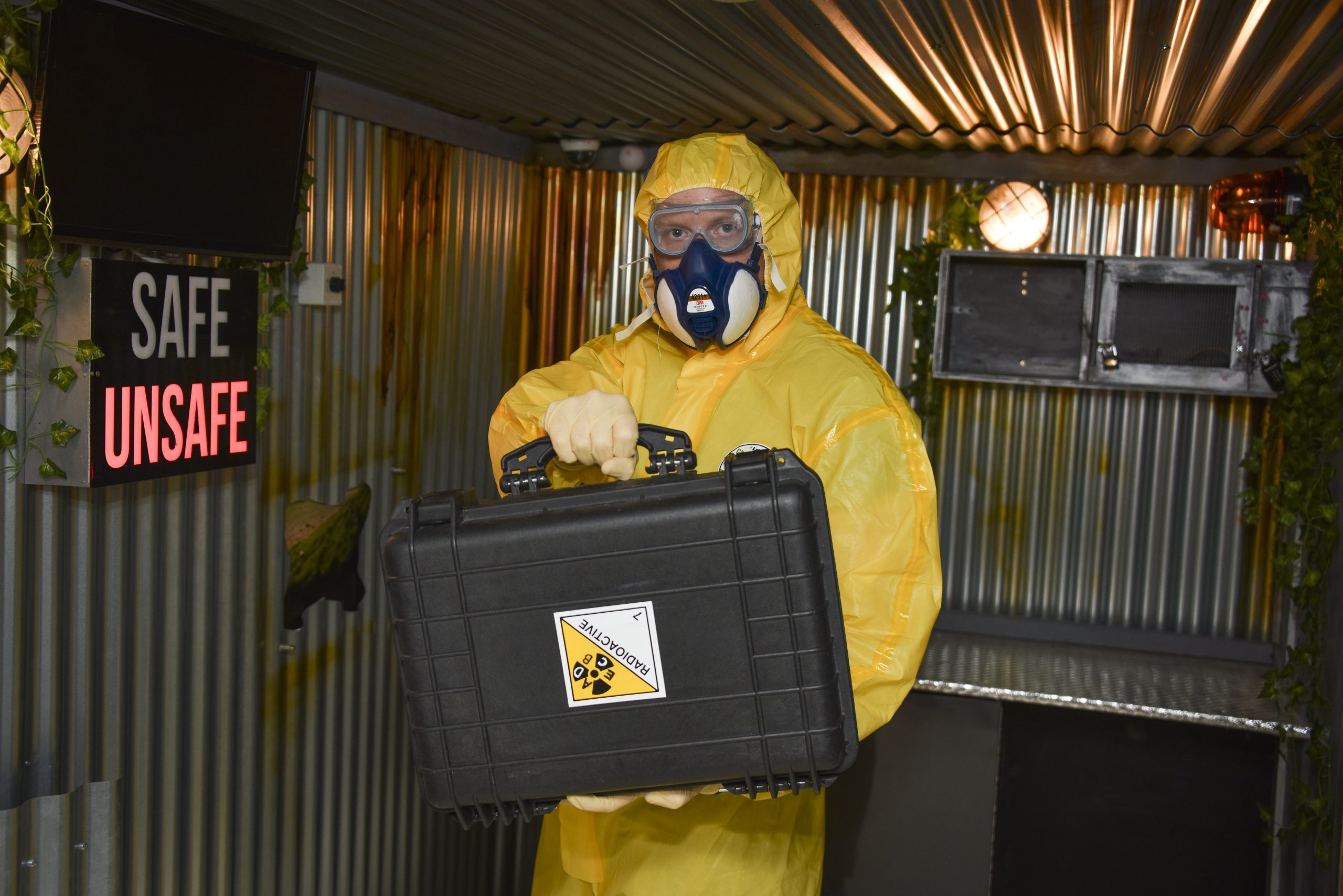 Christmas seems a long time ago. Scratch that – Christmas was a long time ago. Since then, so much has happened: the Olympics almost didn’t happen but then did, but then it would’ve been better if it didn’t because it sucked; England fluffed their only chance to win a major football trophy in our lifetime (on chuffing penalties!); I watched Paddington 2 at least six more times. It’s all been happening.

But it was on that there fair Christmas morn, all those many wistful moons ago that my brother and I were handed a mysterious envelope by our partners. In the seconds before we launched into opening it, various theories ran through our minds: they were giving us cash, they were suing us for somehow being too romantic, they’d found a long-lost brother we never knew about and here was his address! In the end, it wasn’t nearly as mysterious as all that. But then again, it kind of was… (How are you liking this Miss Marple angle I’m going for?)

You see Watson (I may be confusing my literary metaphors), inside the envelope were vouchers for the four of us to go to Pier Pressure Escape Rooms. This was something I had wanted to do ever since I’d heard of escape rooms as a concept, and finally I was going to do it! Only I wasn’t of course, because of stoopid Covid! So, we had to wait a little longer than we would’ve liked, but eventually, as you know, things opened up again, and we were able to redeem our vouchers, and two weeks ago we walked into Pier Pressure in their unassuming premises on Upper North Street, to the warmest welcome imaginable from Rory who, I think I’m right in saying, was born without the ability to stop smiling.

As well as a lovely beaming welcome, Rory talked us through the various Covid measures they’ve put in place to make everyone feel at ease, and told us all we needed to know about what was in store for us, before a second man, dressed head-to-toe in Regency-era attire rushed out to us and explained that- Shhhhh! I can’t tell you what he said. All I can tell you is… our mission had begun! (Please imagine a classic “dah-dah-DAAAAAHHH” played on an organ at this point.)

We then had an hour to solve a series of fiendish puzzles, crack cryptic clues and decipher seemingly undecipherable hints and pointers. It. Was. Amazing! The four of us worked well together and were successful in our quest, and we all left on a something of a high, conversation abuzz of how we solved this, cracked that, and how we should probably all quit our jobs and become a band of altruistic crime-solving fugitives, pitched somewhere between the A-Team and Scooby-Doo. (We’re still working on the name.)

It really was a fantastic day out, one we extended with a delicious lunch at Lavash on Gardner Street and, what the hell, a round at The Dorset to finish off. We enjoyed it so much, I wanted to hear more about Pier Pressure, learn about how the games are put together, and what it takes to make a good team. Luckily for me, Phil Harris, the owner and game designer of Pier Pressure Escape Rooms and Paradox Place, was happy to tell me all about it.

What do you like most about working at Pier Pressure?
Pier Pressure is so much fun to work at, we are always busy so there is always a constant flow of people to interact with – we get all kinds of groups coming to play escape rooms but the one thing nearly everyone has in common is that they are really excited to be there. From energetic hen dos, to quiet families, to couples on a first date, to competitive estate agents doing a teambuilding event… but it doesn’t matter who they are, or what age, or what they do, we know they’ll all have a great time

What can people expect when they come to try and escape?
Lavish sets, challenging puzzles, fun games, enthusiastic staff, an all-round great time!

How many rooms do you have?
We’ve got five different game rooms now, each of them representing a place or an era in Brighton’s colourful cultural history. Well, apart from our nuclear bunker game with the threat of an imminent missile landing, that one isn’t based on a specific historical event!

How do they differ?
Most obviously by theme: the Pavilion themed room is our classiest one, whilst the 60s mod themed murder mystery game is very retro-cool. But the theme is more than just how the room looks, it also dictates how much technology is in use because we do try to make the sets as immersive as possible. We do still have hidden technology involved in our older themed sets, but the games definitely feel more analogue to the players, whilst the 90s rave game and the modern-day lanes diamond heist have many more high-tech gadgets to play with.

The other key difference is the difficulty level, the Pavilion Perplex and Raver Quest are our two entry-level or medium difficulty games that are suitable for everybody, whilst the other three are a fair bit harder and we recommend players to have at least one escape room under their belts before attempting.

What kind of puzzles are involved?
Often in escape rooms, what you have to do is incredibly simple and the fun but challenging bit comes from working out how to do it. We don’t give instructions, instead we leave breadcrumbs and signs that subtly link different things in the room together and gently point players towards what they have to do. As an example of a puzzle, you may just need to find four objects, put them in a certain place in a certain order for something exciting to happen. That in itself obviously doesn’t require much skill, but working out what the order is and where they’re meant to go will not be obvious. We do also like to include some more skilful challenges in a similar manner to the crystal maze.

Who designs the rooms/comes up with the puzzles?
It’s a team effort, my wife Philly and I set the business up and designed the first two games between the two of us, then we hired a very creative manager (Rory) who is also now a key part of our design team and it is mostly the three of us that plan out the new experiences, but each time we’re planning a new game we do a group brainstorming session and get the rest of the team to chuck some ideas into the hat.

You’re an award-winning company – what awards have you won?
One of our games, Loot the Lanes, was ranked as the best escape room game in the whole of the UK two years running. We are particularly proud about this because it’s not a commercial awards system but rather an international survey of escape room enthusiasts who work hard to find out the best games in the world in order to inform other players. This year we also won SME of the year at the Brighton and Hove business awards which was a real honour and one we did not expect to win!

How do you know when to assist players, and when to leave them to figure something out?
This is quite an art form and we spend a lot of time on training with all of our new games hosts. Essentially it comes down to knowing the games inside out and knowing how quickly teams should be moving along. We’ve also seen so many different teams now we will have a pretty good idea within the first 10 minutes as to how well we think the team will do and how much help we expect to give.

What makes a good escape room team?
The most obvious signs of a strong team that we look out for are communication and observation – with communication it is all about making sure everybody in the room is kept updated with what’s been found, what’s been solved, what items would be useful etc. This is something that is much easier said than done because it is so easy for individuals to get carried away with what they’ve found and the puzzles that are in front of them and it is tough to remember to keep talking.

Also, searching and observation are so important. We like to see teams that enter rooms and immediately start opening every cupboard, searching every corner and looking at every detail… But searching alone is not enough, you need to be observant to notice when different things in different parts of the game room are linked because that is often an important clue.

It’s a fascinating insight into the psychology of group dynamics – which groups of people do you find perform the best?
Interestingly enough we find it is the most varied groups of people who perform the best because it means that they have a range of people who think about tasks in different ways. So, for example, I would expect a group of friends who all work in different industries to perform better than a work trip out of colleagues because if they’ve been working together a while, they might all approach challenges in the same way. Equally I really enjoy watching multi-generational teams: often we get teams of teenagers, parents and grandparents all together and they have such a great time with every member figuring different things out during the game.

How has Covid affected you as a business?
Ah man, it’s been so tough. Obviously we were closed like most of the country for the lockdowns, but even when we reopened in between the lockdowns it took a while for us to get up to speed again with regular bookings. And when you times that by three for the three lockdowns, we’ve not only had nine months of closure in the last 18 months, we’ve also had three months of operating at roughly half the number of visitors compared to what we should be doing because there was always caution straight after each rule change. That means we’ve had a full 12 months of very little business and we’re very grateful to the various government schemes that have kept us going.

It was so, so sad to see other attractions close down in that time, we’re a tight-knit community who work together and try to help each other, so every closure was very much felt by all of us.

If you were stuck in an escape room with three celebrities, who would you choose and why?
Well, for starters we wouldn’t be stuck, because we’d ace the game and solve all the puzzles, haha! Player number one has to be my wife Philly, she’s not strictly speaking a celebrity (although she should be) but we’ve done an awful lot of escape rooms together – partially as industry research and partially because we absolutely love them! I’m confident that between us we can complete the escape room so wouldn’t need to rely on our other teammates for puzzle solving skills, so to then finish off our team I’d want to bring along people who would entertain us and make the experience unforgettable fun – I’ll take Stephen Fry and Eddie Izzard please!

For more information and to book what is guaranteed to be a truly memorable experience, please visit the Pier Pressure website