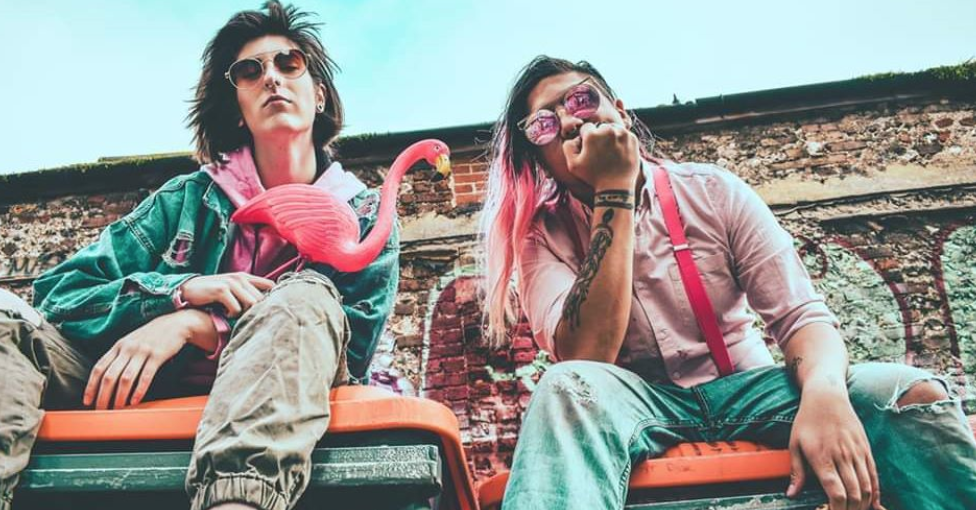 Born out of the underground of Brighton’s music scene, Porcelain Pink are a fiery post-grunge two-piece band made up of guitarist and vocalist Lorenzo Raiola and drummer Steph Deakin.

One year after the drop of their sonically infectious debut single Tightrope, Porcelain Pink have been brewing up a multitude of singles for us to feast our ears on. The two-piece deliver a sound that comes packed with a punch with some seductively heavy guitar licks and head-throbbing drum rudiments. They’re a small yet versatile band offering thrilling melodies that add to their addictively engaging post-grunge and alternative rock style.

The two-piece released their latest single Sideways on March 27th and were originally planning on building momentum for the release by playing at the Prince Albert in Brighton on March 25th, however the event was postponed until further notice due to the coronavirus crisis.

“We’ve been working on our new single for so long.” Says singer and guitarist Lorenzo Raiola. “It’s been a really long time coming. Sideways itself is actually about when stuff goes wrong, and the choice between standing your ground or bending to another person’s will, so I think it’s fitting.” added Raiola.

“The entire point of Porcelain Pink, especially when we became a two-piece, is that we were really tired of not seeing anybody like us on stage playing the music that we play.” Says vocalist Lorenzo, commenting about the ethos of the band. He continues: “Don’t get me wrong, a lot of our heroes are just four white guys standing in leather jackets playing rock, we are big fans of that. But it was really hard for both of us because of the minorities we are a part of. Steph is gay as hell, and I’m a person of colour.”

The band really seem to have established themselves as an inclusive, progressive and multicultural movement and have built themselves a very iconic brand because of it. “We generally try to experiment and make music to the same levels as everybody else but looking nothing like it. We’re not wearing leather jackets and painting our faces black; we are full on pink. We have flamingos on stage, and I go on wearing lipstick.

“Porcelain Pink is an exercise in how far we can push it, and we’re still trying to figure that out. When people look at the band, they think we look nothing like what we sound like, but that’s cool. I don’t want to go on being conceited and say we are pioneers in the representation era or anything, but we just want to take what alt-rock used to be and update it for 2020. This band is essentially a modernisation of an old trope.” Says Raiola.

Lorenzo and Steph are both at university at the moment, studying production at BIMM Brighton. In a similar manner to how many bands form, they met through education and instantly hit it off. “Steph and I literally bumped into each other. The university have these glorified broom closets that they let us practice in every once in a while. I met her in one of those recording studios and we instantly got along.”

Porcelain Pink have a strong and contemporary sense of confidence that you’ll often find with similar sounding bands such as The White Stripes and Royal Blood; but present themselves with a real stand-out sense of flair and quirkiness. They promote themselves with their trademark motto ‘Get Weird’.

“We get comparisons to Royal Blood a lot, but neither me nor Steph can honestly say we have ever listened to them. I would say our biggest influence is The White Stripes, and the whole Meg and Jack White thing of a guy in the front getting weird on guitar, and then a southern looking woman on the drums kicking ass.”

The band originally started as a three-piece, however after losing their bassist due to creative differences, the frontman very literally took the bass into his own hands, saying: “Biting off more than I can chew is a problem I have all the time. As soon as we lost our bassist, we had this moment where we questioned whether we should get another one. From that point on, I thought yeah, I could try playing bass and guitar at the same time, why not!

“I have a splitter on my guitar which takes my guitar signal and splits into two sections of my pedal board, one where I mix my guitar tone, and one where I mix my bass tone. The bass tone is achieved by having a downtuner, which downtunes the signal by two octaves so it sounds thick like a bass, even though I’m playing it on a guitar.”

So clearly, they’re ones for enjoying themselves, especially on stage. I went on to ask him what his favourite song is to play live, he said: “There’s a really fun section at the end of a song we play called Broken Leaf. Every single time we play that song Steph and I lock eyes and just grin, it’s such a good time. One of the most technically proficient songs that I also love to play live is another song we’re going to be releasing in July called Red Cigarette. Towards the end of that tune, I’m playing in 3/4 and Steph switches up to 4/4, so as soon I hit my 3 it becomes her 1. We have to count it out on stage whilst playing to hit it perfectly.”

Despite only having a couple of singles on Spotify, Porcelain Pink have a variety of tunes in the works. However, they’re expecting to distribute them in a rather unorthodox way as they have no plans on releasing a full-length album, saying: “Because we go to BIMM, we have a lot of people talking to us about the business side of music. For us, it doesn’t look like an EP market because of the mass consciousness of attention spans. We’ve got like five or six songs ready to go, but with the instant gratification world we live in, singles seem like the best way to go since nobody listens to an album all the way through anymore.

“Nowadays, the power of the skip button has completely changed the way music is perceived. The most we’ll do is a 3-song EP, or even a double single release, like a B-side. I mean think about it, when you listen to an album, the best songs are either at the beginning or the end. The weirdest stuff is normally in the middle.”

The band are currently unsigned and have no label affiliation, but they’re certainly not far from it. With a few more singles and even a small EP in the pipeline, big stuff is bound to come out of the duo very soon.

“We are actually re-recording our single Tightrope as a two-piece. It’s going to be in drop C which is the way we perform it live. We may even release the single as a live song.” Continues lead guitarist, Lorenzo Raiola.

Reflecting on what was a momentous yet ambitious moment and what it means to have goals in place, Lorenzo said: “At 18, when I was bright-eyed and bushy tailed, I got a tattoo on my left arm that reads ‘Play Wembley Stadium’ with a tick-box next to it. Every day I wake up and look at the thing and freak out, I think I’ve set my fate. It’s in my own handwriting too. It’s the epitome of getting weird and aiming for it.”