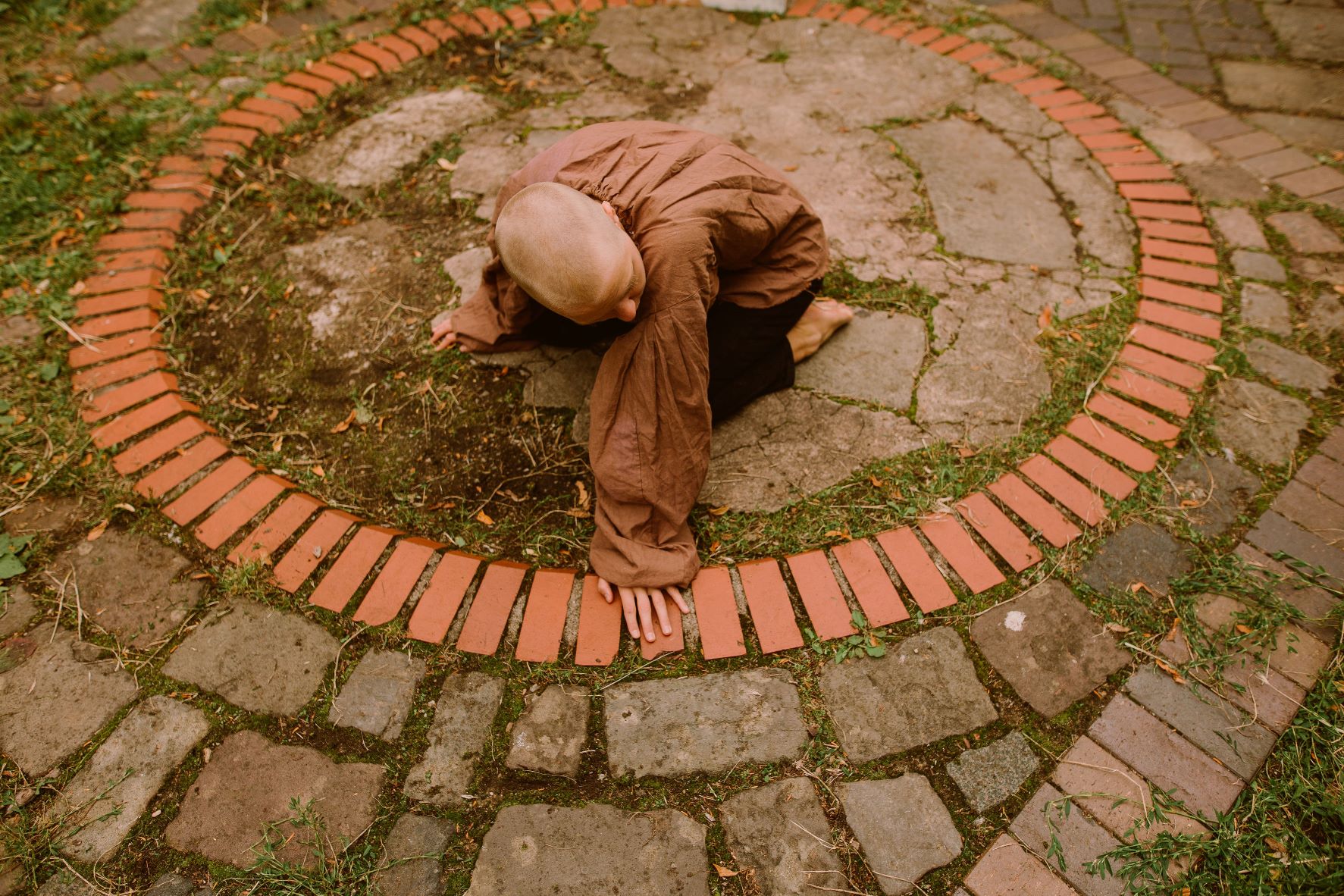 Performing at the Brighton Open Air Theatre, Quandary Collective performed a brilliant and bloody rendition of Shakespeare’s Richard II. I was left excited and intrigued by what this female-led company had to offer, leaving the performance deep in thought thanks to the way they had altered the source material.

Part of Quandary Collective’s mission statement is to “make adaptations in ways challenging and relevant to contemporary society, using multimedia, music and movement” and they certainly did just that. In their adaptation, Richard is a woman posing as a man so she can retain the title of king. All of this in a world that, post societal collapse, has reverted to feudal-style monarchy. Exactly how far in the future this is and just how much destruction occurred in the collapse is left to the audience’s imagination. Perhaps the world had gone through a full multi-millennium loop, all the way back around to another shot at the end of the 14th Century. Or maybe, and I feel more likely, this is less than a century away. In any case: All hail King Richard!

Richard II: The Return of The Queen

Richard being a woman added a gendered element to the King’s identity crisis. Rather than it being the problem of the duality of mortal man as God’s chosen King that is typical to Richard II, we see a multi-dimensional problem: mortal woman posing as mortal man as God’s chosen King amongst a court of men. Coco Maerten’s performance as Richard is excellent and she perfectly conveys the self-doubt Richard feels. The movement and emotional anguish portrayed here seemed to channel David Tennant’s Richard II. Having said that, Maerten’s Richard seemed a little closer to madness than Tennant’s did – but I suppose that societal collapse would do that to people.

By making Richard a woman Quandary Collective’s production claims to ask questions of toxic masculinity and how gender impacts relations of power. I couldn’t help but feel, however, that these questions could have been presented in a more consistent way had Richard’s gender been known throughout the play, rather than being revealed toward the end. In doing this, it seemed that these issues were left for the other characters to simply play out in the ‘Might Makes Right’ style struggles over power and land, before being really hammered home by their reactions and actions once Richard’s true identity was revealed.

Despite this minor gripe, Richard’s revealed femininity does add another element to the play. The shock that the other characters feel at the fact that they have let themselves be led by a woman seems to shake many of them to the core. Some characters seem moved to be gentler with Richard, while others look to take advantage. In this context, Aumerle’s (portrayed by Conor Mainwaring) betrayal of Richard becomes especially devastating.

Alongside Maerten’s stellar performance as Richard, the rest of the cast shine just as bright. Standouts include: Marc Zayat as a cocky but charismatic Sir Thomas Mowbray and a Lord Ross that provides some nice comic relief, George Alexander as a Henry Bolingbroke that seems like he really does seek redemption and Danann McAleer as a thoroughly detestable Northumberland. Overall, all the performances were great, and they really owned the space at Brighton Open Air Theatre.

The music for this production went a long way to sell the setting. An electronic score penned and performed by Kester Hynds combines tribal beats, synths, and strings to really create the atmosphere for this play. The musical opening, with its almost choral vocal chanting, was truly epic – it felt like something that wouldn’t be amiss in Ari Aster’s ‘Midsommar.’ All of this aided by some crows cawing nearby, clearly unable to resist the urge to get involved.

The acting and music were complemented by outstanding costume design. Ragged robes and coats toed the line between remnants of our time and relics of the feudal era, contributing to the timeless nature of this performance. On top of this, the minimal but versatile set design was utilised well by the cast.

Something to Think About

While the post-apocalyptic setting really came across in the costume and sound design, the conceptual heavy lifting was done mainly by Quandary Collective’s contextualising in the online description and on the flyers handed out at the theatre. The full context of this production is as follows (as Quandary Collective frame it): A kingdom in which a woman is presenting as a man to hold on to power. Where feudal law has returned due to global ecological collapse and the ravaging effects of the pandemic. A place where a war is brewing between neighbouring lands, and the politics of old and young wrestle with each other to maintain a fragile peace.

Having the context spelled out in such a way is no bad thing, however. The dialogue of the play stuck close to the source material, meaning that it was up to the audience to apply the setting to the events of the play – which worked wonders in leaving me thinking about the play and the relevance to the world we live in today. I’ve been revisiting the flyer time and time again, each time picking up on some new layer that I hadn’t previously considered.

The conflict in Richard’s court, when viewed in the light of contemporary politics, recalls the infighting seen in the Labour party over the last decade, while Richard’s indecision is reminiscent of the flip-flopping the Conservatives have engaged in since the pandemic. Truthfully, Shakespeare’s Richard II could be any of the current party leaders, given his inability to stand by his word and general lack of positive political action. These are just some of my thoughts on the matter, as this production is deeply thought provoking. The best thing to do is view it for yourselves and see what you think.

With an emphasis on making politically and culturally relevant productions, it was no surprise that Quandary Collective’s adaptation of Richard II was an exciting and provocative watch. The combination of quality acting, awesome costume design and a thrilling electronic music score fully pulled me into the world that Quandary Collective were presenting. Deeply thought provoking, I left the play with more questions than answers buzzing around my head – but these questions were directed at the world at large, rather than the production itself. While I am unsure whether the challenges against toxic masculinity and the role gender plays in power relations were raised as robustly as they could have been, I still feel that the performance is as culturally and politically relevant as it gets.

You can check out Quandary Collective’s Richard II at the following dates and venues:

Catch Me! Comes to Brighton Dome