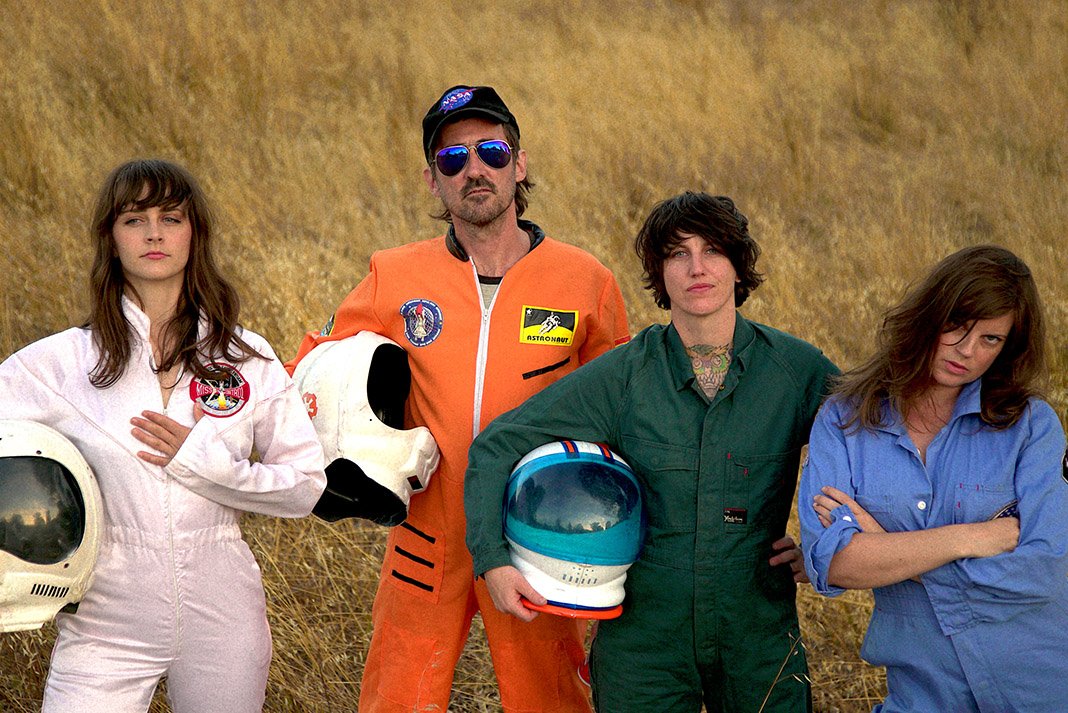 What kind of reactions do you get from your name?

People seem to either really love it, or really hate it (Mark Zuckerburg in this camp)… A bit like our music really, so makes sense!

How does this project feel different from The Drones?

The Drones was really heavy, downer, depressing music. This seems a bit more fun, I think it sounds more fun, it feels more fun at least.

How would you describe your sound in 3 words?

What was your creative process in making the album?

Well, we formed a band, toured the US, recorded and released an album all within a year. So the creative process was intense. We had to figure out our sound, and each others personalities and musical styles and how we fit it all together. We kinda just did it song by song. The first song we wrote Chameleon Paint, we worked on, recorded and released straight away on a 7″. So the first song we released was our ONLY song. Then the second song we released Soft Power, also on 7″ was the second song we had. These songs are on our album as are the next two songs in the 7″ series we put out in the lead up to the album, but we kinda just chucked them out there hoping they’d work.

Thinking about this now I wonder if that’s conceit or stupidity… I like to think enthusiasm. The rest of the album we had a little more time. Though what I described sounds like the actual writing/recording of them was quick. It wasn’t. It was a meticulous process of everyone taking great care to find ways of going against what they would naturally do to make the music more exciting/weird/ interesting. That was the goal anyway. And vast amounts of booze.

The song Soft Power is about cultural imperialism, which America has obviously been the master of for decades. Do you think with Trump in power this has will changed or has changed?

The song implies it has/will change with Trump. But who fucking knows. I can’t think of which country could possibly take over within the Trump era time frame.

A lot of the songs in the album cover heavy topics, do you find writing music cathartic or does it just remind you of all the bad stuff going on in the world?

That question is obviously for Gaz! He’s in the studio madly mixing our second album for deadline, so I couldn’t anwser these questions. I’m trying to think of his response… and to cover myself I’m going to say a bit of both. And maybe he’d say that the heavy topics are just the topics of what’s going on in the world. And drama in songs is just more fun!

Would it be fair to say you’re anti-internet, if not, cautious of the internet? Why?

A lot of bands come out of Perth, why do you think that is?

Because it’s such a boring place.

What’s the main thing you want listeners to get from your music?

I personally like to be emotionally moved by music. I love music that makes me cry. It’s not that hard to make me cry though – a soppy rom com at 30,000 ft will do it every time. So, I want listeners to cry when they hear our music. (ha ha).

You’re playing The Great Escape this summer, do you have a pre-performance ritual?