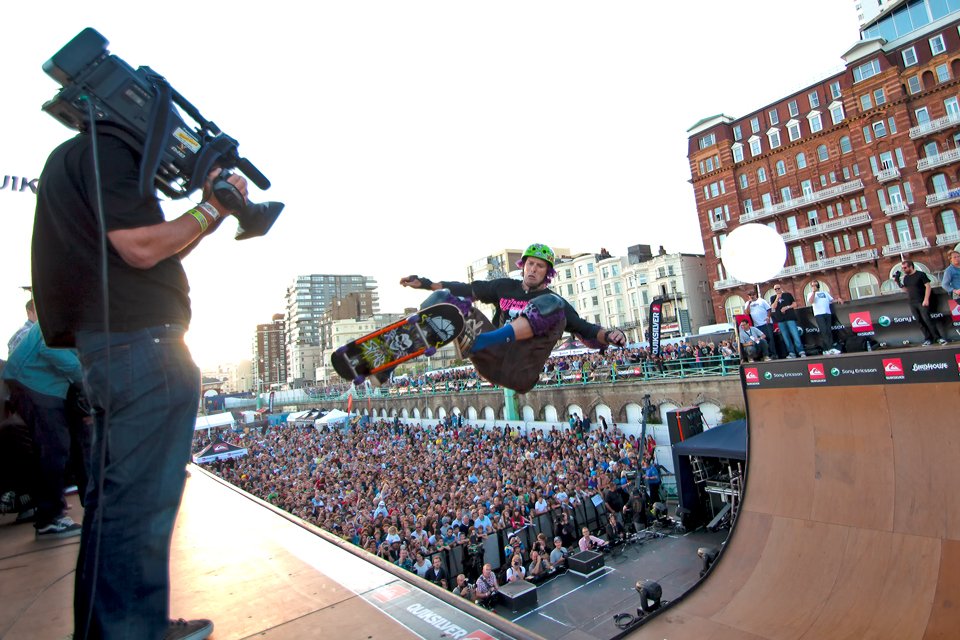 “What was Brighton like before Covid-19, when the city was full of magical moments?” asks photographer David Smith.

Ten years ago, when encouraged by friends, I embarked on a career change from promoter and man about town to action photographer. The reasons for this were many and with the help of the recently launched BN1 Magazine made my first tentative steps into an exciting world. The magazine’s editor gave me an opportunity to contribute during this embryonic time. A highlight of 2010 for me, was the visit of skateboarding legend Tony Hawk and The Birdhouse Skateboarders, Sandro Dias, Jesse Fritsch and Kevin Staab.

It has been said don’t meet your heroes, as Tony Hawk had been one of mine since back in the day, when skateboarding first took its grip in the UK. So there was plenty of anticipation as, well as a little anxiety, when I attended the press conference at the Grand Hotel. He didn’t disappoint. After announcing his delight at discovering four skate shops in the North Laines, he declared his love for this city and the crowd that turned up for the next day’s show gave him that love back, and more.

On Weds 21 July 2010’s balmy summer’s evening, it went down. In front of 3300 adoring fans on the largest portable G Ramp in the UK, the show started with guest boarders from the UK, including Sam Bosworth, Sam Beckett, Andy Scott, Jussi Korhonen, Alex Halford, warming up the show admirably before Tony Hawk & Friends took centre stage. In between this, I had tentatively introduced myself to the PR girls who were organising the feed of photographers and filmmakers to the top of the ramp to capture the action. Each photographer, two at a time, was to be given ten minutes each to do their best, in order of hierarchy. Most important skateboard mags and national press getting their turn first. Would I get my chance?  At this point I was still not sure if I would be allowed to join this heavenly crew.

I was still getting some great shots and experience from the front row on ground level, even with the lower end DSLRs hanging from my shoulders. Side to side the boys went hurtling down an almost vertical slope at incredible speeds and up the other side of the 40ft G-Ramp to pull off their gravity-defying tricks. The crowd was stoked, as was I.

Then without warning, after a couple of subtle reminders to the PR crew of my presence, I was invited up the ramp to join the Gods of boards and wheels. At this point I remembered the words of the famous war photographer Robert Capa, another hero, – ‘If you’re not capturing the action, you’re not close enough to the action’. With these words ringing through my being, I was off. I must explain that I do suffer from a little vertigo, so with gritted teeth I scaled up the ladder at the rear of the ramp, determined not to let a little fear stop me. I was quickly followed by another ‘togger’ who was given the same chance.

After taking some deep calming breaths, I took a moment to look at the Brighton crowd below and the golden sunlight bathing over the promenade, thinking: ‘Wow, this place is beautiful.’ Then armed with a wide-angle lens proceeded to follow the tricks. Right eye in the viewfinder, left eye trying to follow the action, no chance to check the images on the back of the camera. Ten minutes can pass very quickly. After about five minutes went by, there was lots of pics of the Birdhouse crew, but no Hawk. Had my chance gone? Then through the blazing sunshine, the man of the day roared over – wheels coming so close to my lens it felt like I would have the marks to show, so this is what Robert Capa meant – it was exhilarating.

No sooner had my chance started, then it was over. The nice PR ladies beckoned me off the ramp. Ten minutes with the Gods is all you get and I was grateful, but could I get that last shot. Seeing my recent acquaintance was closer to the ladder, I suggested he descended first. Time for one more shot, or maybe two… I turned to see Tony Hawk ascend into another artistic moment, everything slowed down. With his board pointing into the last of the evening sunlight, the skateboarding version of touching heavenly inspiration was there. Skater, sun, crowd, skaters looking on to their leader and click, click, click, capture. Hoping the inventors of auto focus had not let me down I descended ‘Jacobs Ladder’ to the mortals below.

Excitedly, once back on Terra firma, I looked at the last shots. At a picture I’m still proud of, a large print still hanging on my wall today. Thank you Tony, thank you Birdhouse and thank you Chris BN1 for this remarkable day, most of all thank you Brighton. May days like these return soon.

Words and pictures by David Smith