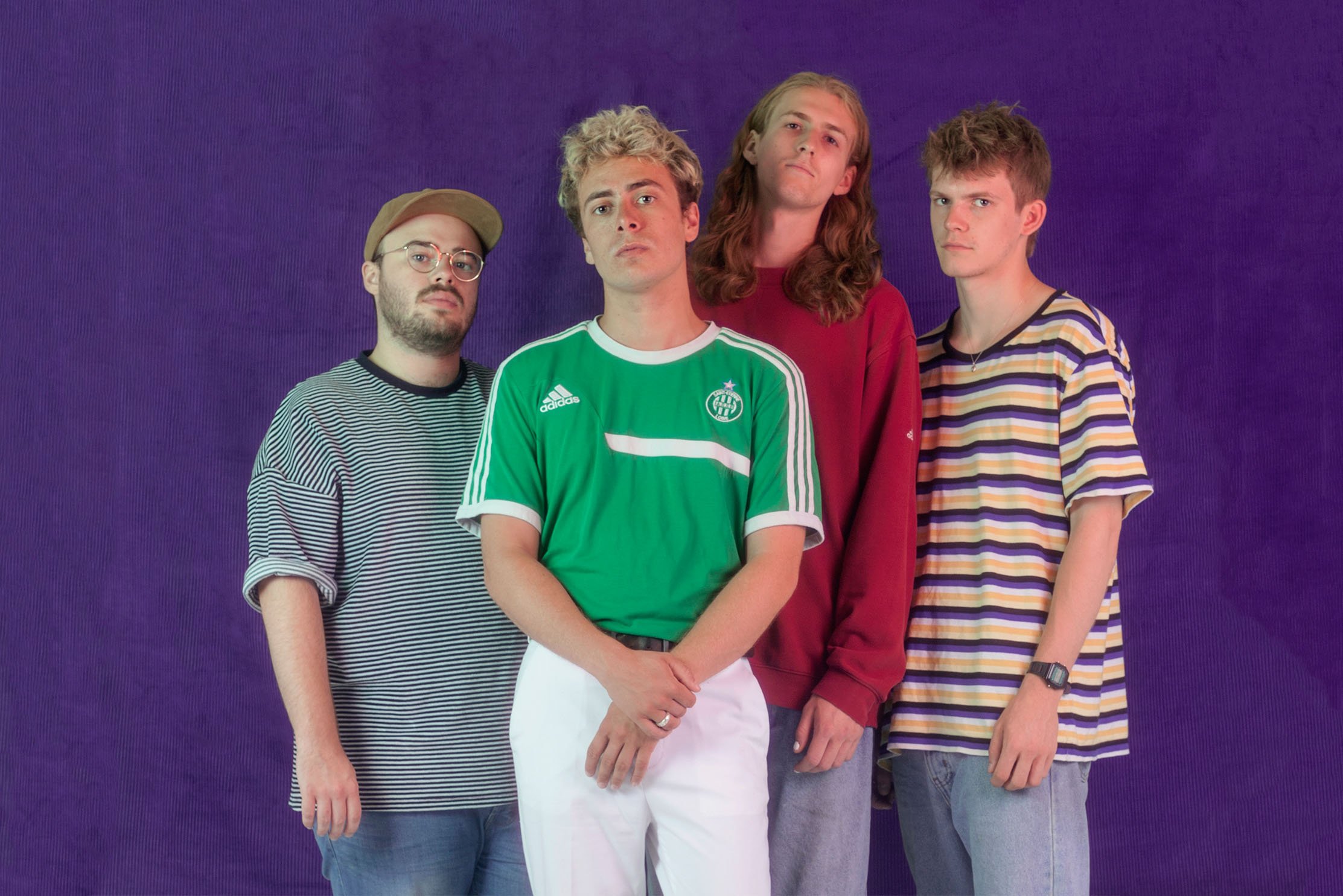 Rising Brighton quartet Ralph TV recently unleashed another perfect slice of their dreamy, bedroom pop. The blissful 4 U is accompanied by a Wes Anderson-inspired video, collaboratively produced by frontman Will Osborne and his sister Molly during lockdown,

Using stop-motion filming technique, the siblings created their colourful promo using everyday fabrics and objects. The use of symmetry, typography and a bright colour pallet allows the viewer to be fully immersed in the playful and striking visual.

Written and produced by the band, 4 U offers up a heavenly range of synth sounds and funk inspired beats. The elegant arrangement is complimented by an echoing vocal calling out to a loved one. Gathering praise from BBC Introducing Sussex as well as With Guitars and Indie Central Music, 4 U follows Ralph TV’s critically-acclaimed debut album, last year’s appropriately titled Cabin Fever Dreams. 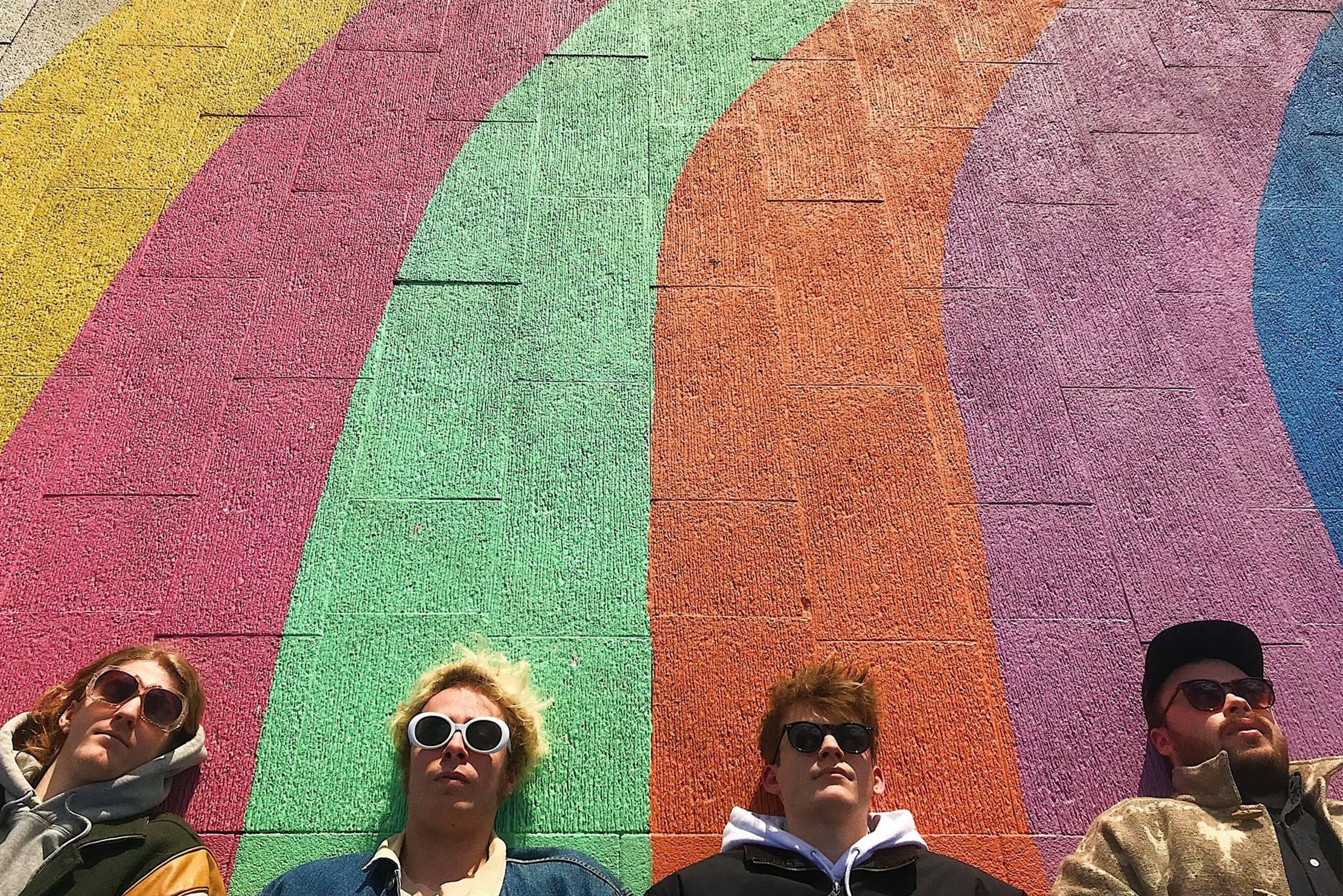 Hitting the scene in 2018 with their self-titled debut EP, this saw Ralph TV generate over a million streams on Spotify. Following on from this, the four-piece performed a sold-out date in Paris, played stunning homecoming shows at Brighton’s The Great Escape, and support Self Esteem on part of her UK tour.

The band draws influence from artists as diverse as Sade, Brian Wilson and Shuggie Otis, HOMESHAKE, Jerry Paper and Faye Webster. Formed initially by childhood friends Ben Brown (guitar/synth/vocal) and Will Osborne (vocal/bass), they relocated from Essex to Brighton where they met brothers Isaac (drums/vocal) and Luke (lead guitar/vocal) Vosper who now complete the line-up.

As the Ralph Tv get ready to make another appearance at The Great Escape, we spoke to Will Osborne about life during lockdown, the Brighton scene and THAT video…

Across the entire creative community, we’ve seen a variety of response in working practices to Covid – from producing work remotely across the Atlantic to artists moving in together. How did lockdown impact your own writing and production?

Truthfully, lockdown hasn’t really changed our process a great deal. We have been writing and working remotely since we started the band and are pretty well versed on how to send files and stems to each other via DropBox and WeTransfer etc. I guess the main thing that changed is that lockdown has given us more time to craft the tunes in depth, most of us have been off work on furlough so there has been plenty of time to be creative and write a whole batch of new music!

The Great Escape is taking activities online this year. Which does have the side-effect of no capacity-limits on how many people can check out the bands. Are you looking forwards to it? The festival is often a game-changer for participants.

We are honoured to be part of the Great Escape this year, especially as a local Brighton band. Even though it’s not gonna be a live show, it will be the first time we have performed on stage for over a year so we gotta get those cobwebs dusted off pronto! We also played the festival in 2019 and it was so much fun. I might not be able to get a free haircut in the Spotify lounge this year, but I know it’s going to be a very special edition of TGE as the exciting prospect of live music returning is drawing closer. It’s a real privilege to have the chance to represent the emerging musicians of the UK this year.

Are you worried about the consequences of the pandemic on venues in Brighton & Hove? Could there be new DIY approaches to performing live?

Of course, it goes without saying that it’s been an unbelievably challenging time for the industry, especially those in the live/bookings sector. As far as I’m aware most of the fantastic venues we are lucky to have in Brighton have weathered the storm and will be ready to host again this summer, fingers crossed! As you say, DIY spaces and gigs are also very important should any of these venues sadly have to close. I think there’s definitely the personnel and community strength here to ensure that the music scene in Brighton always has spaces to nurture its talent.

The video accompanying 4 U is a stunning bit of work. Was it due to careful planning, or just an experimental accident?

It was definitely the latter. I was back at my family home in Colchester for Christmas and ended up spending lockdown three there with my sister Molly. She’s incredibly creative and so, seeing as we had very little to do, we decided to try and make a video for the upcoming single. The idea started off as a simple lyric video but it kinda snowballed into this hybrid stop motion short movie after we watched Wes Andersons Fantastic Mr Fox on New Year’s Eve. We spent no money making it, just using fabrics and other bits from around the house. Molly did all the editing and hard graft, so grateful to have had her as my lockdown buddy. 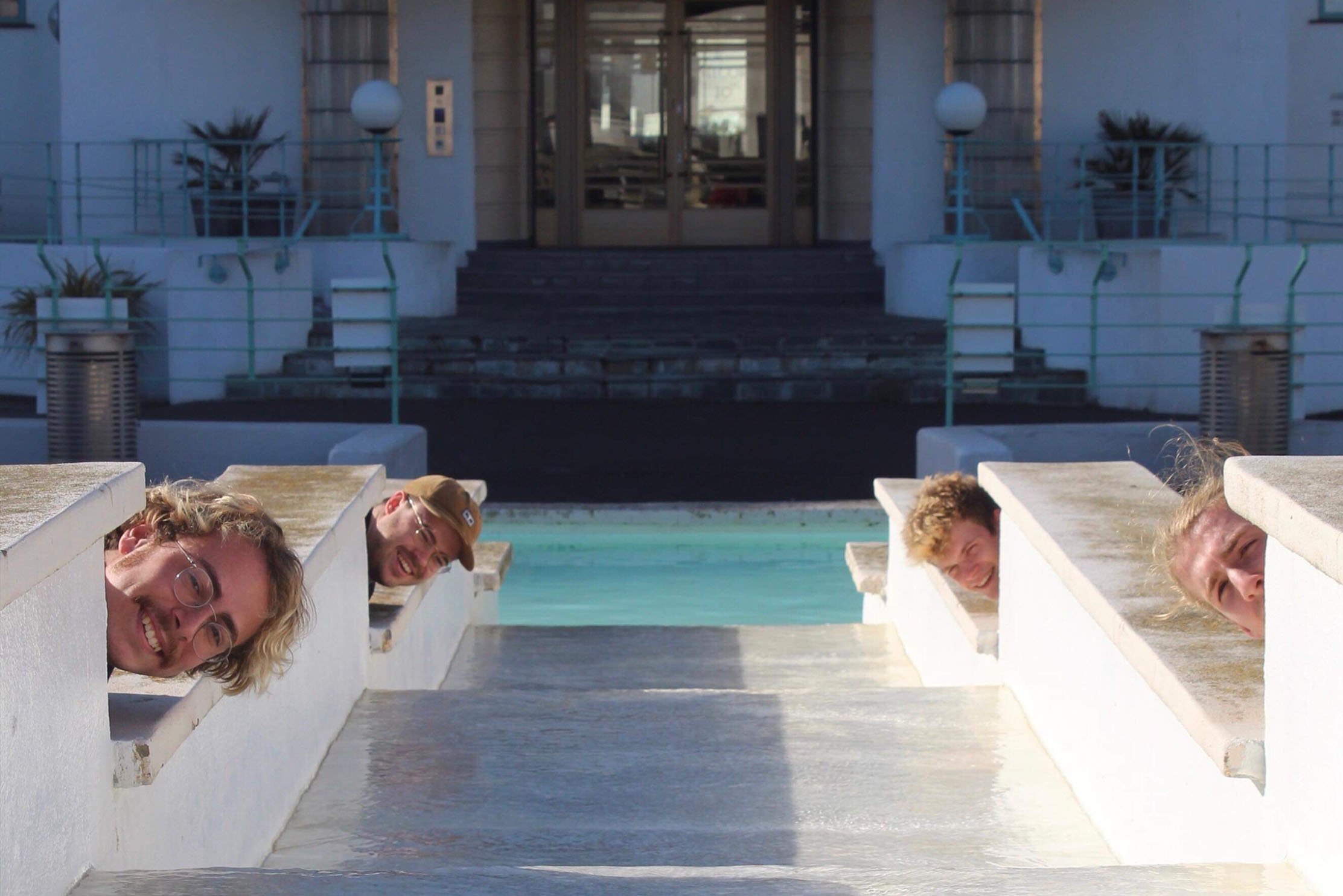 Your debut, Cabin Fever Dreams, was hugely well-received. Has it given you a new set of ambitions for the second collection?

It definitely has! We are almost finished writing the second album actually, and are aiming to have it out in early 2022. We’re looking to take things up-tempo a little bit with the new stuff, hopefully we’ll be able to tour for the release this time.

Do you think this summer is going to see a growing public thirst for optimistic sun-kissed pop?

We are quietly hopeful of that, but it depends whether we all actually do get set free on June 21st. If all goes well and we are able to descend, like locusts, on the beer gardens of the world then maybe we could see the third summer of love. For the sake of our livelihood lets hope it happens.

You seem to draw from an eclectic range of artists, but none of your music sounds derivative. Is this a conscious effort to forge your own sound, or has it just turned out that way?

That’s so lovely to hear! We’ve never really set out with any plan other than to make music which is true to ourselves. I don’t think it’s possible for us as people to write sad or angry music, it’s not in our nature. We’re all unashamedly in love with pop music, old and new, and that is the only governing idea in the band. We’ve always wanted to make music with pop sensibilities, other than that everything seems to have just turned out the way it has naturally. 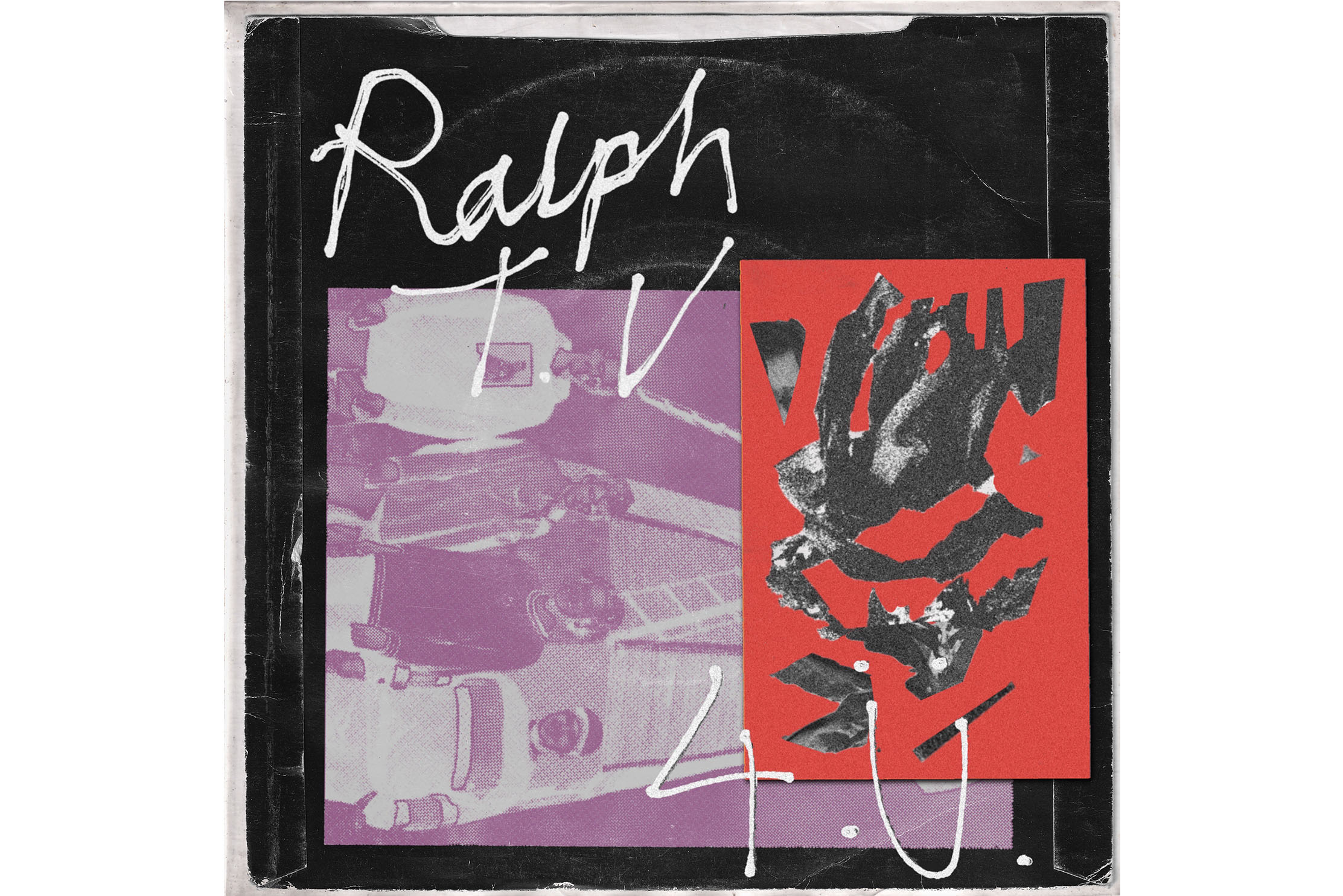 Do you consider yourself part of any scene, or do you want to form your own around you?

I think we identify as being part of the scene here in Brighton. Moving to Brighton from East Anglia was a big change, from being in a pretty barren area of the country for music suddenly we’d arrived in a place that has a very vibrant community of artists and venues to support them. It’s been really nice becoming part of that community over the last couple of years. Other than that I guess you could class us as part of the worldwide ‘Bedroom Pop’ scene, seeing as we make all of our music at home and never in the studio.

Who is your favourite Ralph?

It’s got to be Ralph Wiggum, for his undeniable charm and wisdom. Followed in close second by Ralph the Pheasant who lives in my girlfriend’s garden with his three wives.

Ralph TV play The Great Escape Online, when it streams on Weds 12 – Sat 15 2021. Their single 4 U, and album, Cabin Fever Dreams, are both available now, via Nice Guys.

Ralph Tv can be found online at: