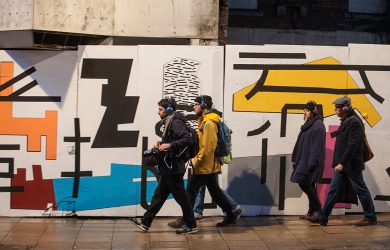 The human auditory system is a complex tool. While we might use our hearing for listening to media, chatting with others or let an alarm clock rouse us, it processes hundreds of noises a second on a subconscious level. An animal in distress, a sudden gust of wind or breaking glass, all prompt our primal brains to leap into action. Certain sounds can also prompt an emotional response or highlight memories. This is the basis for Ambulation, an event taking in some much-loved and unfamiliar corners of Brighton’s Royal Estate.

Taking place on Thurs 18 – Sat 20 Oct, this series of guided walks will offer participants a different perspective on the city’s historic landmark. “We’re quite dominated in the world by visual media,” says the work’s creator, Tim Shaw. “We’re often bombarded by adverts through visual means and the internet is a very visual place. I think sounds have a different effect on memory and how we experience the world. It’s something we often ignore.” While wearing wireless headphones, Ambulation will allow wanderers to immerse themselves in a sonic journey around Brighton Dome, Museum and Art Gallery and Royal Pavilion.

What Shaw strives to do on the walk is reveal or make primary the sonic experience of a certain places. Often, he’ll record something in the surroundings, then later mix them into the soundscape to make weird juxtapositions. It plays with the way people interpret sound, toying with the connection between noises and memory. “The walk is responsive to each venue. I plan a route around an environment. It starts at Brighton Dome, then heads to some places around the Estate, including a few which people don’t go to so often.” It’s enabled by a portable computer and transmitter. Strategically placed microphones to pick up the noises of the environment, which are processed and mixed live, then sent to the audience’s headphones.

A mix of performance, radio broadcasts and live field recordings, it builds into a musical piece playing with memory, intuition and impulse. “We are very visual creatures, but maybe a few thousand years ago we relied on our ears a bit more. There are certain noises that pop out. Road noise or the general din of a city we tend to ignore, whereas the ones on a higher register, like bird song or sirens we tend to register. They have different effects, which is interesting.”

As you’d expect, Shaw played around with tape recorders as a child, before moving on to creating experimental music using recorded media and synthesisers. Then he began considering a performance which moves from traditional stages to distinct locations “Many field recordings are so removed from their source. You might hear the radio, sounds of the Amazon rain forest on a CD, but hearing them processed and played live in the space where you’re experiencing them is quite effective.” He presents the work using custom-built software and is developing a tiny computer to run it all on. “Recording technology is really good and cheap. It’s made things more accessible and easier to cart around. In the past analogue tape gear was quite heavy, you probably wouldn’t want to cart those about.” Now the entry point for making your own hardware or software is easier than ever.  There plenty of platforms where you can build technology to suit your needs, instead of being reliant on manufacturers.”

A Guide to the Ultimate Question: Land-Based or Online Casinos?

What Shaw provides is an opportunity to hear the world differently, revealing some of the  sounds which occur around us which we might tend to ignore or be oblivious to. “It’s also visually interesting,” he adds. “Because you’ve got this abstract soundscape happening in your ears, it changes the way you see things. Walking through Brighton Pavilion or Dome, which are already amazing, this will give an even odder character to those already odd spaces.”