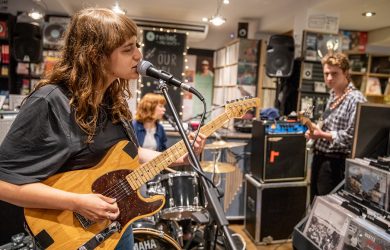 A large crowd stormed Resident Records, crowding up the shop-floor ready and prepared to see local Brighton-band, Our Girl.

After the release of their debut album Stranger Today last week and being named Resident’s Album of the Week, it was set to be a much anticipated show.

Tourists flock to Brighton every year, for the beach, lanes and some, specifically for the large selection of independent record shops. Resident Records is without a doubt Brighton’s biggest and most renowned record shop, located on Kensington Gardens, right in the centre of the North Laine. It’s most certainly known for its wide selection of genres, limited editions, and music ticket sales for local venues.

It’s also known for it’s regular in-stores, where musicians flock to perform in this intimate indie shop setting. On this day, it was time for local Our Girl to take to the floor and perform a knockout set  – which they did.

Returning to your hometown and performing can be slightly daunting for musicians, yet Our Girl took this in their stride performing an array of tracks from Stranger Today (even performing a song about Brighton’s very own ‘Level’). While some bands go down the acoustic route and choose to dampen their sound slightly, Our Girl did the opposite, blasting the speakers with their stylish rock-y sound.

With passersby from the street entering wondering what the crowds were for, and being pleasantly surprised when they see a band performing, it’s not surprise that by the end of their performance, the shop floor was packed out, all coming together to see these Brighton stars.

Once their set concluded, they stayed to sign records and talk to their fans, making sure nobody walked away unhappy.

Our Girl are currently are headed on tour throughout September and October, performing at The Haunt on 26 October. More information can be found on their website.