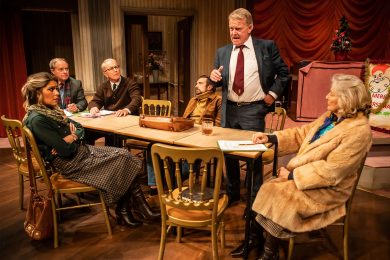 Ten Times Table, written by multi award-winning writer Alan Ayckbourn, is the inaugural production of The Classic Comedy Theatre Company. Headed to Theatre Royal Brighton on Mon 23 – Sat 28 March, it’s produced by Bill Kenwright and his team behind The Agatha Christie, The Classic Thriller and The Classic Screen To Stage theatre companies. Between them, these companies have enjoyed over 15 years of theatrical success across the UK.

The star cast will be led by TV and stage actor Robert Daws, who is most loved for his role as Dr Gordon Ormerod in The Royal as well as his time in other hit shows such as Poldark, Outside Edge and Roger Roger. Joining him is Deborah Grant, best known for playing Wendy in Not Going Out and Deborah Bergerac in Bergerac. Emmerdale and Holby City star Gemma Oaten is joined by Robert Duncan of Drop The Dead Donkey fame and theatre veteran Mark Curry, well known for his appearances in Hollyoaks and as Kevin in Last Of The Summer Wine. Craig Gazey, famous for his portrayal of Graeme Proctor in Coronation Street completes the cast, alongside Elizabeth Power known for playing Christine Hewitt in EastEnders. 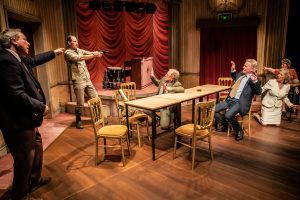 In the long‐since ‘grand’ ballroom of the local Swan Hotel, a most miscellaneous assemblage gathers to conduct the business of the Pendon Folk Festival, led by excitable chairman Ray. Unfortunately, for Ray, his calamitous committee quickly divides, as his wife Helen has a bone to pick… Add a Marxist schoolteacher, a military dog‐breeder and an octogenarian secretary, and the table is set for one of comedy master Ayckbourn’s most hilarious plays.

The star of The Royal, Roger Roger and Outside Edge tells us about returning to the stage in Alan Ayckbourn’s committee comedy Ten Times Table.

Ten Times Table is about a small market town trying to stage a folk pageant. My character, Ray, is looking for something to base the pageant on and he finds a story in an old book that describes the Massacre of the Pendon Twelve. It’s about an uprising by agricultural workers in the 1870s which is put down rather brutally. So I persuade the committee that we should try and recreate this very colourful piece of local history in the market square. We all end up in costumes, trying to put on this pageant and it has almost as many casualties as the original Massacre of the Pendon Twelve!

It’s basically about how a group of ten people sitting on the committee, with all the best intentions in the world, manage to completely cock it all up. Anyone who’s ever sat on a committee will recognise the people in this play. Everyone’s there. You’ve got the pedantic secretary. You’ve got the half‐drunken committee member with marriage problems. My wife is on the committee with me and we are diametrically opposed in what we both think is the best way to go. It’s all there. Ayckbourn has a brilliant ear and eye for this sort of thing. 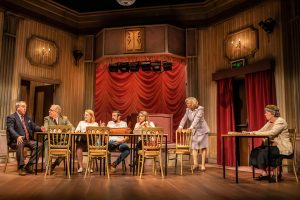 How are you finding your character, Ray?

He’s great. He’s very organised and full of enthusiasm. He’s a sweet‐hearted man who’s passionate about his town. Unfortunately, although he is made chairman, he’s fairly useless and quite easily dominated. He is the worst possible chairman you could have.

He just tries to listen to everyone and by trying to make sure everyone is happy, he falls down and struggles to keep control.

Ayckbourn premiered the play back in 1977. How has it stood the test of time?

Although it’s over 40 years old, it’s strangely topical in these difficult political times. As we were rehearsing it, we were all turning to each other and saying: “My goodness me, it’s just like Brexit!” I think you can see how human nature doesn’t really change. Whether it’s on a committee or on an international scale, the weaknesses and faults of human beings still come through.

The credit for that longevity must go to playwright Alan Ayckbourn. What do you think makes him such a special writer?

I’ve been an actor for 42 years now, but I’ve only ever done two Ayckbourn plays before. I’m coming late to Alan Ayckbourn as an actor, but I just love him as a writer. He has this extraordinary ability, which all great playwrights have, to put a mirror up to life. People watching his plays get an awful lot of enjoyment by recognising people around them. Strangely enough, not a lot of people recognise themselves!

But he doesn’t just populate his stage with very recognisable characters, he’s also the master of stagecraft. He’s an absolute genius when it comes to constructing his plays. Every time you go to see an Ayckbourn, there’s always something different and fascinating because he builds his plays in such a vivid, extraordinary and surprising way. I think this is one of the great things with Ayckbourn. He has always managed to surprise his audiences. Just when you think you know where he may be going, he takes you somewhere else. You can never get one step ahead of him. That makes for exciting, interesting theatre because he wrong‐foots audience’s expectations. 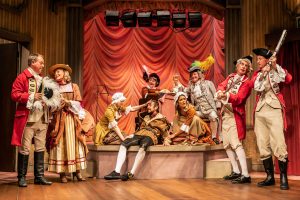 You’ve work prolifically in television and radio, and you also write crime novels. What brings you back to the theatre?

I think you need to keep your hand in. It’s a very muscular thing, theatre. It requires very different techniques and approaches to other mediums in which I work.

Brighton Dome opens its doors to the past with heritage events

If you don’t want to lose the physical and mental muscles that you need for the stage, then you’ve got to do it. It’s a pleasure to do it too.

You’re performing Ten Times Table around the UK. What’s the appeal of touring?

I love touring. When I do theatre, I like to tour because every week is a first night. Every week you’re turning up somewhere else at another theatre in another town. I find that really exciting. I also find that audiences, when you’re on tour, are terrific. You get the feeling in a lot of regional theatres that the audience really wants to be there, and they love and appreciate their theatre.

When you talk about audiences appreciating theatre, what do you think makes a trip to see a show so special for them?

I think what brings people to the theatre is the simple fact that it is live and it’s thrilling to have actors and set and a story unfolding in front of you. It is a unique experience and very different to anything else you come across other than maybe sport. Lots of people go to a football match for the thrill of being there when the goal is scored. I firmly believe that when you’re in the theatre, when that big laugh comes and you’ve got 1000 people laughing their heads off together at that moment, that’s theatre’s goal. It’s thrilling.