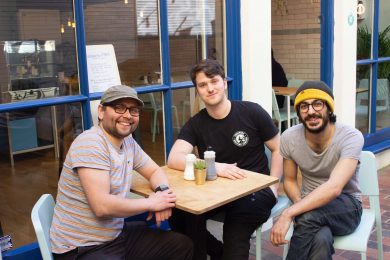 Rybka, the Fish that Likes to Swim – A New Gem on Brighton’s Independent Scene

A new venue which pulls together cocktails on tap, craft beer, live music and, most of all, fish & chips, is opening on Meeting House Lane. Named Rybka, it’s a reflection of the years Ned Lawlor, Harry Petrakas and Raf Tetich have spent working in hotels, pubs and cafés around Brighton.

This managing trio sit in the middle of their bar space, under the Rybka – or “infinite fish” – logo painted on the white tiles. Nat is designing the menu; it has to be digital but handwritten. Raf claps his hands, laughing, in an effort to sync the video with the sound, all eyes turn towards the front camera and the discussion about their new venture starts.

The room is clean and minimalist. It looks very different from the Marwood that Raf and Harry had to let go after the first lockdown. Harry emphasizes that they’ve left Marwood and have no intention of taking its aesthetic with them. He adds that Marwood’s appearance was the result of years of interaction with customers. “It never started out looking like that!”

Raf cuts him short, “Someone brings a mannequin in, you know? And then you put a hat on it. And then suddenly someone puts a dress on it, then someone goes, ‘I like this dress – can I swap it?’ But eventually what happens is you realize that this mannequin that someone gave you, which was just a mannequin, is now a mannequin with a dress, a badge, a hat, a mask and whatever else. Those things can’t happen straight away, that happened over three years.”

Rybka is their own project in which Ned – a cocktail savvy who also runs immersive cocktail events under his company “Society of Cocktails” – has joined them. They want it to be different, mixing the idea of a traditional fish & chip shop with Raf’s love for plants, and the long counters found in bars and café’s. For them, it’s always been the people who make the place; its look, singular but uncluttered, reflects their desire for “transparency.”

Asking them to define Rybka in three words, the first that comes up is “community.” Harry stresses that they want everyone to feel welcome, “Whether you’re vegan or vegetarian, you like coffee, you like wine, you like beer, you like good food, it needs to have something for you, and also whatever your music taste. It has to be something that feels like it caters for you, not for everyone, but for you. You know, a good thing – that matters!” The second and third defining words are Fish & Vodka. “Rybka” is a Polish word, reflecting Raf’s origins – meaning “little fish” – and is inspired by the sentence “rybka lubi plywac.” This means “The fish likes to swim,” because traditionally in Poland a shot of vodka is chased with some pickled herring. “You’d say, ‘the fish likes to swim’ and you’d chase it with some frozen vodka. It’s a thing!” He highlights how there is an important Polish crowd in Brighton that needs to be more represented.

Having worked for years in his family’s fish & chip shops in Birmingham, Harry wants to bring a new approach to this British staple, inspired by the way fast food has changed:

“The way people experience fast food has completely changed. You can now order your burger with a cocktail, or a craft beer, while listening to a DJ playing. Before that, people had no other choice than to get a burger from Burger King, you know? The way people view certain types of fast food has changed.”

He wants to “educate people about fish and chips” through the “savoir faire” he gathered in Birmingham. What started with fish & chips is way more now.

The trio have always felt compelled to talk about their product, “so that people know a little bit about what they’re putting into their bodies, whether it’s food, or whether it’s drink. Because it’s important, I think, to know whether your beer is vegan or not, whether your wine is organic or not.” Ned adds, “There’s so much stuff being made in Sussex – wines and beers around here are just incredible. To get people like that involved is a big part of what we do.” Harry stops wiping invisible dirt from the table and states, “This place isn’t just us, it’s got independence in it.” He expands on the opportunity they had to build proper relationships by choosing who they work with; suppliers like Brighton Hot Sauce and local artists are what embellishes the place, turning it into a better work environment.

Expanding on the subject, Raf emphasized the importance of stories. They want to work around “people with cool stories.” Theirs being the reflection of 10 years working around this city.

Ned showed me the menu that Nat made digital and Harry went up to the kitchen to cook one of his fine-tuned fish and chips. Laughs and marvellous food, Rybka is a must if you live in Brighton or are just passing by.