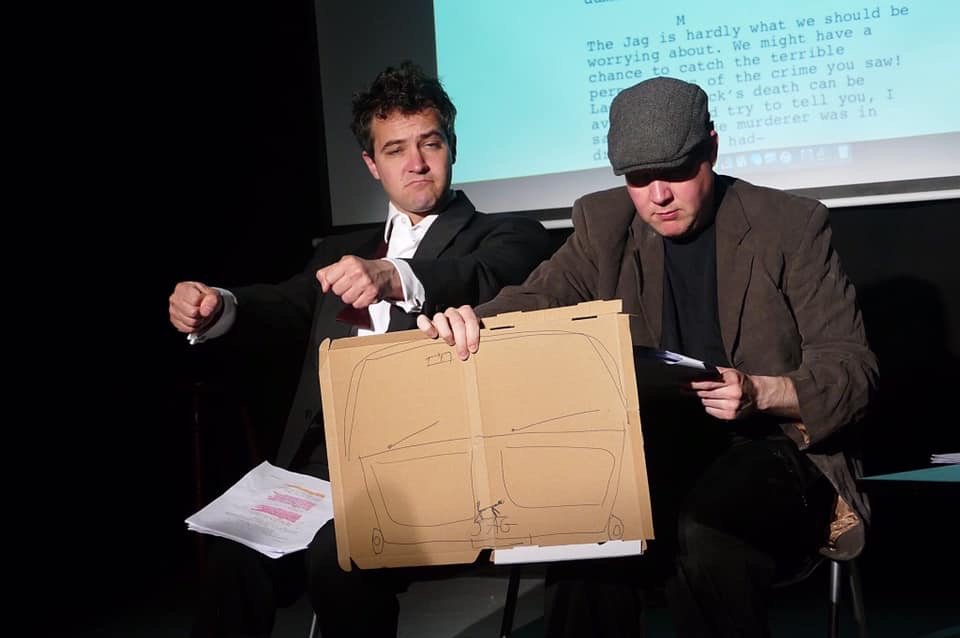 The Shi*t Scripts crew, amicably directed by Annie Harris, endeavour to realise a play scripted by Annie’s former beau ‘Zach’ when he was 15. An important part of the preamble is the information that ‘Zach’ has since given up all creative pursuits and now languishes in the doldrums of office work. The message seems to be that creativity and art, no matter how ‘sh*t’, keep the soul alive, so abandon it at your peril.

What follows is a gleeful, chaotic celebration of, perhaps, the all-time worst murder mystery/psychological thriller. The offending script is projected on the back wall for all to see.

Two main actors and Harris jumping in and out of the action give it their best shot, as they wrestle with the misspellings, grammatical oddities and 15-year-old approximations of stage directions and technical notes – ‘I haven’t the foggiest how they could do this,’ one clueless aside laments about an imagined scene change, ‘but hey’!

Two suspects turn out to be a single psychotic murderer. A seedy Berlin street sports a ‘prostitute puppet’ in the window. This is all good fun, as far as it goes, but the problem for me is that the goofiness is hit-and-miss at best and the comic chops of the performers lack the instincts and skills of other, more experienced clowns. I feel like I’m sitting in on something dreamed up by my mates, who are a right laugh and have thrown together this thing they think is totes hilarious. It is funny, kind of. But for a show, an actual show, a paying audience deserves more. And when the trousers come off, I know the best laughs I’m going to get will be cheap. Shame, more could and should have been made of the opening point about the callow, unvarnished but essential creative spirit.

And scene! All the best in theatres in Brighton this June