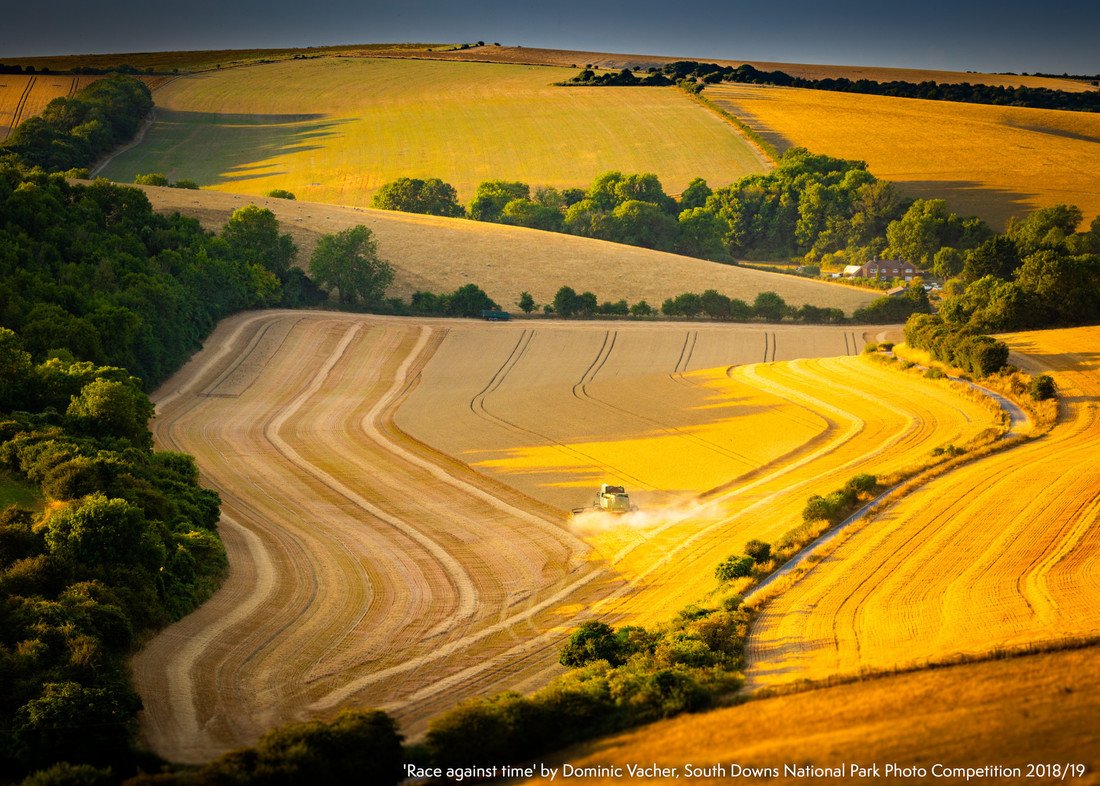 Following some fierce and stunning competition, judges for the South Downs National Park photo competition have selected a range of winning and highly commended images. Now voting has opened for the people’s choice vote, which will earn one photographer the first prize of £100.

Early morning light casts shadows across an ethereal autumn mist, witnessed only by rolling hills and one small bird in Lorraine Heaysman’s winning image in the South Downs National Park photo competition 2018-19. “Mornings have always been my favourite time of the day and I spend so much time searching for these conditions,” she said. “Mist can be fickle! I am bowled over that the judges liked my image enough for it to win. Moments like these on a hill top are filled with beauty, peace and tranquillity and my heart skips a beat whenever I walk along the downs and see scenes like this.” Lorraine, from Worthing in West Sussex, wins £250 for her picture ‘Autumn Gold’ which was captured in the hills above Upwaltham. 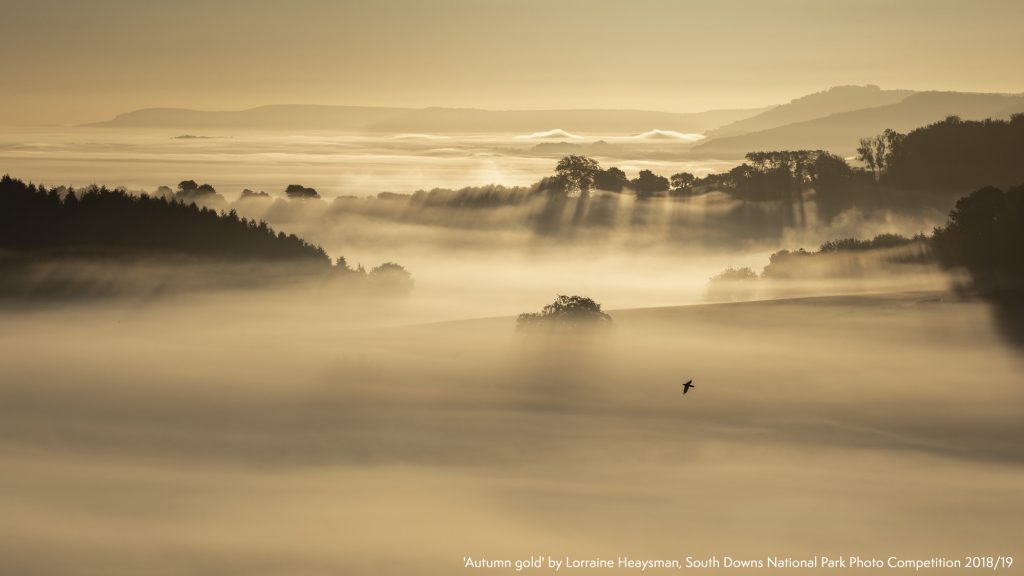 The judges second prize goes to Dominic Vacher for his picture ‘Race Against Time’(featured picture at top), which was taken from Tegdown Hill north of Brighton during last summer’s heatwave.  Winning £150, he captures the last light hitting the dust, as a farmer races to bring his harvest home amongst lightening evening shadows. “There had been a long hot and dry spell for weeks, but the forecast predicted a dramatic change with stormy weather imminent,” Vacher says. “The farmer was clearly taking heed and working frantically to get his crops harvested before the weather turned. I returned the next day hoping to find a classic scene with the field scattered with bales but alas, the farmer had come back early and scooped them up and off to storage, away from the heavy rain.”

“I love the pace, lines and colours of Dominic’s photo,” said competition judge Finn Hopson, local photographer and owner of Brighton Photography Gallery. “This is the life of a farmer, out working in the National Park in 2018 and yet it captures the feeling of those old war time photos designed to remind people of what a special place the South Downs is.”

Third prize has been won by Clive Blott for his show-stopping portrait of a cow taken on a very cold January morning near Midhurst. Clive, from Easebourne, has won £50 for his photo ‘Freshly Frozen’. “I was walking our dog in the snow and found these cows sheltering under the trees,” he says. “There had been a lot of snow that week – great fun for those, like me, that didn’t have to travel to work and the perfect opportunity for me to walk everywhere with my camera close at hand. Photography has been a hobby of mine for a many years and this will definitely encourage me to enter more competitions in the future.” 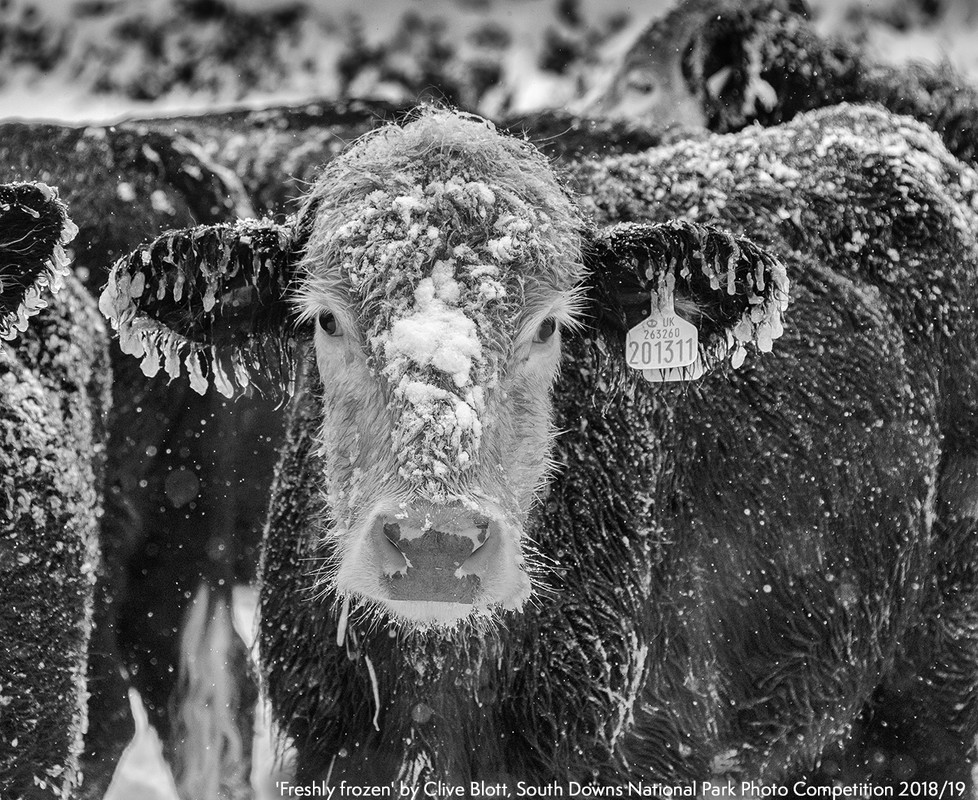 “The textures in Clive’s photo are wonderful,” said Award-winning photographer and competition judge Rachael Talibart. “He has made this cow, with its frozen eyelashes, ears hung with icicles and snow-covered nose, look heroic – like a polar explorer.”

The three commended images are ‘Amongst The Beech Trees’ by Jonathan Peacock from Pulborough, West Sussex; ‘Winter On Butser’ by Ron De’Ath from Rowlands Castle, Hampshire, and ‘Coastguard Cottages At Sunrise’ by Zoltan Kecskes from Eastbourne, East Sussex.

The three winning images and three highly commended images, in the South Downs National Park photo competition, now all go forward for the people’s choice vote with a prize of £100.

To take part in this vote, you can view all the images and select your favourite at: www.southdowns.gov.uk/vote-favourite-photo