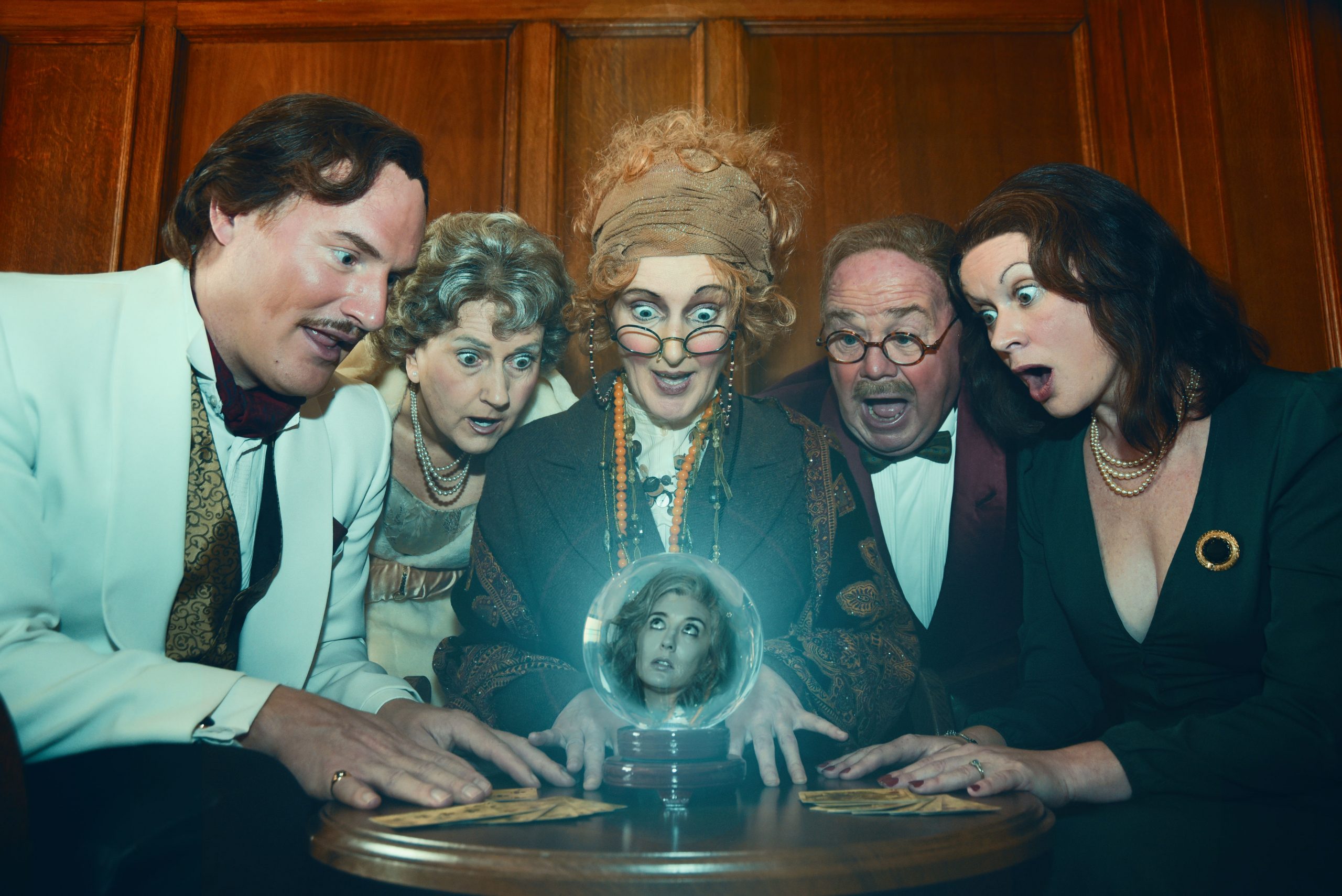 December 8th was a cold night at The Barn Theatre in Southwick. Fortunately, I was there to catch the opening night of the Southwick Players’ rendition of Blithe Spirit – and the theatre was packed out! The Players delivered Noël Coward’s farcical comedy with exuberance and joy, filling The Barn with enough laughter to warm through the winter chill. With awesome set design and costuming accompanied by quality acting all around, watching this performance of Blithe Spirit was a lovely, light-hearted way to spend an evening.

A Hauntingly Good Time at The Barn Theatre

Coward’s play is translated beautifully into The Barn with a set that sends you straight back to the 1940s – a feeling that was amplified by well-selected music for the scene changes. The world of Charles Condomine and company is really sold to the audience through the set and costumes, all the characters truly felt like they belonged in this space. The floaty multi-layered chiffon dress donned by Hannah Witty as Elvira gave her a properly ethereal vibe, and Sam Nixon’s Madame Arcati appeared exactly as I would have expected a mid-twentieth century medium to – which is something I didn’t expect to already have a preconceived notion of! Somewhere between a substitute art teacher and a new-age middle-class hippy housewife, just a quick glance at Madame Arcati’s clothes would tell you that she had a crystal ball or two in her house. The icing on the cake were the well-executed practical effects and use of lighting to create that spooky vibe.

Watching the highly-strung melodrama of the wealthy writer bickering with his wives was reminiscent of the catty arguments witnessed between couples at teenage house parties and the drinking was certainly on par with this, too (another dry martini, please)! I’m always impressed when actors can keep dislikeable characters interesting to watch, and Phil Nair-Brown managed that with Charles Condomine. Dripping with pomp and sleaze, I could have believed that Elvira had dragged herself back from the afterlife just to irritate him. Then again, maybe she was just waiting for the opportunity, and being summoned via séance was the perfect chance.

While there was the odd slip up with some lines, this never detracted from the play as the recovery was always quick and smooth. In fact, it almost added to the characters and seemed to fit in with the quick-witted, fast-talking, heavy drinking characters of Coward’s play. On top of all of that, Amy Whittington’s Edith never failed to get a laugh – and with so much sprinting around the set I admire her stamina and propensity for physical comedy. The playing off of Ruth and Elvira against each other was delivered exceptionally (Ruth by Lou Yeo). While both of them are a pain in the arse in their own ways, I couldn’t help but feel that all the characters in the play deserved each other. Overall, the performances throughout the play were great and led to a truly immersive and entertaining experience.

The nearly sold-out Barn Theatre was as full of laughs as it was of people, and the cast were clearly enjoying themselves, too. Solid performances accompanied by the great set design and costuming made this performance of Blithe Spirit an absolute joy to watch. While the content of the play is decidedly cynical and heartless, the Southwick Players filled the room with soul. The first Noël Coward play I’ve seen, and the Players have certainly piqued my interest and desire to check out his other work. Whether this would be your first or twentieth time witnessing a production of Blithe Spirit, I can only recommend you get down to The Barn Theatre and watch this performance.

The Southwick Players have a busy year ahead of them, with further productions due for March, July, October and December in 2022! Check out the full list below:

Set at Girton College, Cambridge in 1896. The action involves four talented female undergraduates and the campaign to be allowed to receive the same formal degree as their male colleagues. The play touches on issues surrounding the feminist ideals of the late 19th century New Woman – equal education rights, sexual autonomy, and political enfranchisement.

Five very different women sign up for pole dancing classes at the local village hall – each of them with their own reasons for taking up pole dancing. When one of the women receives devastating news, the others soon pull together and decide to turn their new skill into a fund raising event. As each of the women’s stories unfolds, they share laughter and tears in this hilarious, sad and ultimately moving play, a call to all women, celebrating strength through adversity.

The House They Grew Up In

Reclusive siblings Peppy and Daniel live in a house stuffed full of everything they have ever owned. Their eccentric appearance and reclusive lifestyle means they are not like others on their road. When young neighbour Ben from next door comes visiting, looking for friendship, what happens next challenges everyone’s idea of tolerance. A tender, dark and funny look at co-dependency, anxiety, and living alongside those who are different from us.

Once upon a time in a land far away, the beautiful Princess is given a sixteenth birthday present by her evil godmother Carabosse. By pricking her finger on an enchanted spinning wheel she is placed under a cruel curse and forced to sleep for 100 years. Can true love survive and the handsome Prince Charming break the spell?
Will this be the return of Southwick’s bi-annual Panto?
Oh yes it will!

Check out the Southwick Players online: