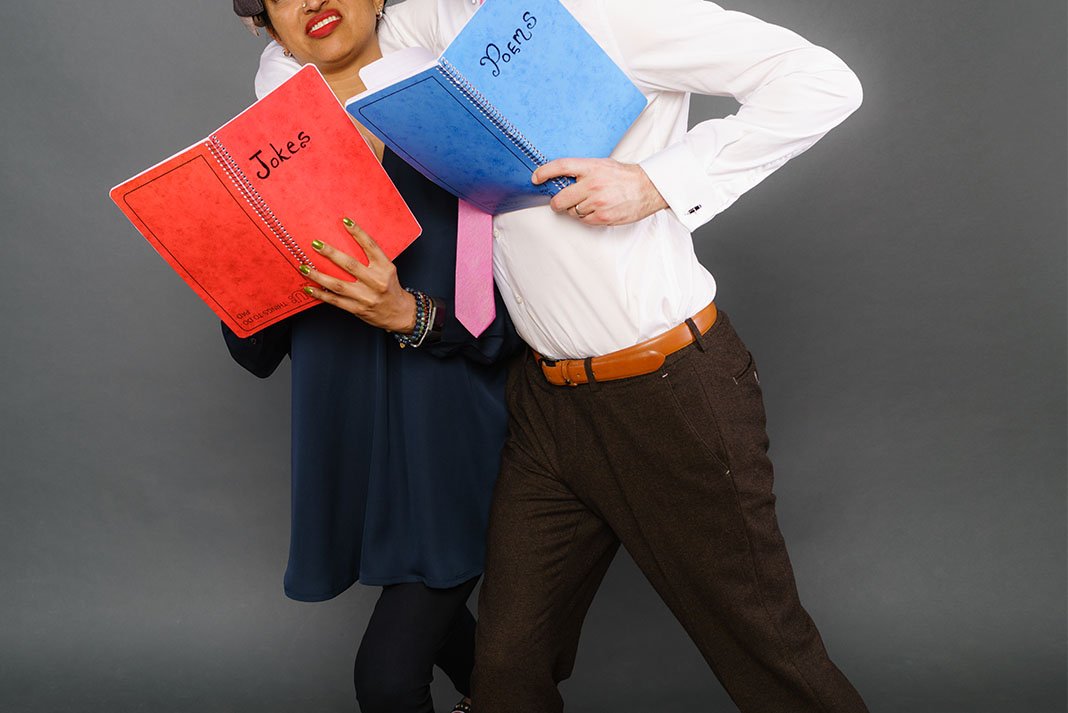 I’ll happily admit, I’m a little wary of poetry. My ingrained impression of it is populated by sorrowful characters pouring out the fragility of their existence, whilst an audience shifts uncomfortably in the seats below. Conversely, comedy is a form I robustly understand. It offers a wide range of expression, with a clearly demarcated victory condition. I’m aware I’ve just outed myself as being shallow (or ignorant even), but I’m often told I wear this well.

So, for me, Stand Up & Slam is a bit of a curiosity. Two very distinct performance styles pitted against each other in battle. You couldn’t set the Seagulls against the Patriots and expect a recognisable result – so witnessing the pure anarchy of poetry facing down stand-up had a certain allure.

Despite it being a chilly January school-night, the show is almost completely sold out. Intimate, but in no cramped, the Komedia’s Studio is a perfect environment for this kind of affair. The evening’s two-part format is reasonably straightforward. The first segment sees a poet and comedian go head to head. The second sees everyone riffing on a selection of themes.

Every team needs a captain, and the poetry side are headed by the Oli Forsyth, who has some beautifully constructed prose to unleash. In his charge is Sophie Brown. While her delivery is once or twice a little breathless, possibly due to excitement, she arguably whips out the most playful material across the whole show. The poem forged entirely from women’s magazine headlines was pure joy.

Completing this unabashed power-trio is flawless freestyle MC Gramski, already something of a popular face about town. He takes narrative suggestions from the audience and instantly proves he’s a tough act to follow.

The poetry, without exception, turns out to be a revelation. Packed with intensely clever wordplay, misdirection and quirks, there’s plenty of stylistic flourishes shared with its comedy cousin. There’s not a moment of maudlin weeping into the microphone. This carries with it an uneasy realisation I might be wrong about other things. As well.

The resident comedy captain is the hilarious Eshaan Akbar, who rightfully began to bait the ‘right on’ Brighton audience, mocking their lack of real diversity. He also tries to lead us in a cricket chant – which I, in good conscience, won’t be able to recreate in public.

He’s accompanied by Brighton’s (well, Yorkshire originally, but this city will hopefully assimilate her) Maisie Adams, who gives us a glimpse into a somewhat curious home life. She’s quick, warm and instantly likeable. Alongside is Alice Fraser who is fully laden with that Aussie charm.  My perception of Australia involves a society which is constantly assessing itself, whilst remaining relentlessly pragmatic. Perhaps it’s why their comedic exports are reliably penetrating and pithy. Similarly, she’s happy to establish some boundaries and march straight across them.

The second half drops in. With all performers onstage at once the self-depreciation and banter picks up. There’s a lot more freedom for improvisation and comebacks here, but the show never threatens to descend into chaos. As a comedy outing it fully delivered – but Stand Up & Slam simultaneously demonstrated poetry isn’t always indulgent, turgid or dull – if ever. Of course, the competition element proves to be quite arbitrary, but when you’re having this much fun everybody becomes a winner!