Renowned saxophonist, guitarist, percussionist and songwriter Steve Norman plays his first ever hometown solo show in September. As a member of Spandau Ballet, the 80s brought multiple hit singles (including True, Gold and Through the Barricades), over 25 million records worldwide and numerous multi-platinum awards. 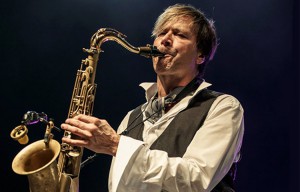 Heading to Hove’s The Old Market on Sat 8 Sept, which follows on from hugely successful sell out dates around Europe, we took the chance to speak to Steve about an incredible career.

How is your new band/solo material different to Spandau Ballet?

In the solo shows I pay homage, with the help of my band, to some of the artists that have influenced me on my musical journey, to the musicians that impelled me to become a professional musician in the first place. The versions of the tunes we perform are always somewhat different to the originals as I’m always interested in coming in from a different angle. That goes for the Spandau tunes too. Add to that a sprinkling of newly written tunes and we have an eclectic mix of soul, pop, blues, rock with the odd curve ball thrown in for good measure.

You performed your final tour with Spandau Ballet in 2016, how did that feel? Will there be any more from them?

Spandau is very dear to me. I think that that goes for all the band members. And now that we have a new frontman, singer Ross William Wild it means that we can finally have a good run with it; record new music and tour the globe again without interruptions. These are pretty exciting times for me.

Is it unusual performing solo on stage as opposed to being with a band you were close to?

I always perform with my band (Paul Cuddeford on guitar, Sabrina Winter on backing vocals and squirrel, Joe Becket on keyboards, percussion and loud shirts and my son, Jaco on bass and smouldering looks). It’s very different to Spandau, of course. But then I’m used to performing in different bands. I often join up with other artists when Spandau are not active, constantly learning from different experiences. I find it highly rewarding.

How are your recent pop-up shows going?

I believe that audiences these days love to see an artist performing up close. It’s something very intimate for all participants, like a private party where everybody knows each other. That’s actually not far from the truth as a lot of the Spandau fans use the occasions to meet up. The Q&A section is not scripted and so often takes various twists and turns and can be hilarious. It can get somewhat anarchic, you never know what to expect. Musically it’s fairly loose too, lots of nods and winks from me to the band as we fly by the proverbial seat of our pants. I love the spontaneity of it, keeping it dangerously fresh. I wear my heart on my sleeve.

You’ve performed and worked with plenty of interesting people (David Bowie/T Rex producer, Tony Visconti, Bruce Foxton from The Jam, Iggy Pop and the Sex Pistols’ Glen Matlock. What are some of the highlights of these exciting times?

I’ve performed, toured and recorded with many of the Bowie alumni (Tony Visconti, Woody Woodmansey of The Spiders From Mars, piano man Mike Garson, guitarist Earl Slick, Gail Anne Dorsey, Gerry Leonard, Stirling Campbell to name a few) and every collaboration has been special to me as I was a big Bowie fan like many of my generation. I appreciated and was influenced by their work.

At a recent ‘Celebrating Bowie’ event in London, Joe Eliot from Def Leppard and I got a bit tipsy and crashed the stage as Duran’s Simon Le Bon was singing. We took over backing vocals, moves and all. That was a ton of fun and I’d like to see the footage! Actually… on second thoughts, best leave it. I’m always jumping onstage with my pal, Steve Harley of Cockney Rebel. And he often reciprocates at my shows.

Top of the ticks on my bucket list has to be when Iggy asked me to join him on stage at a festival in France last summer. He announced me thus… “We’ve got Steve Norman from Spandau Ballet! Where are ya mother ******!”

I was so proud.

You worked in Ibiza for 13 years how did that go for you?

I was having a tough time after Spandau dissipated first time around at the beginning of the 90s. The experience left me with a very low self-esteem. It was only after moving to Ibiza in 1993 that I found myself again. Ibiza does that. You can ‘lose’ yourself or ‘find’ yourself on the island. My children, Jaco and Lara grew up there and I immersed myself in the Spanish language and culture. I also became actively involved in the dance music scene; performing with DJs, producing dance music, compiling CDs, etc.. I still perform with DJs occasionally (improvised sax & percussion) but they are my own shows albeit in a somewhat different format to the ‘Live and Personal’ shows with the band. Brighton, with its gregarious and artistic personality is the closest I can get to Ibiza in this country. Oh, and I do love to be beside the seaside. Another reason why I live and love it here.

What did you learn if anything from your time in Ibiza?

Besides learning Spanish (my children are half Spanish) I became more spiritually aware. There was a reason why the hippies flocked to Ibiza in the 60s. Many residents, who have lived there for some time, say that they feel a certain magnetism, an attraction to the island. Although Ibiza is not the same Ibiza as it was when I lived there, I still have to occasionally go and visit that little piece of my heart that I left behind.

You’ve participated in masterclasses at BIMM, what advice would you give to budding musicians there?

That you don’t have to be a musical virtuoso to touch people with music. For me it’s about the feel and emotion of a piece. I really dislike the musical gymnastics approach where, for example, a singer will adlib through a whole song in defiance of a strong melody in order to show off what he or she are capable of doing. These days I try to simplify everything whether it’s an instrumental solo, a melody or a lyric. Less is more in my book.

Where has been your favourite place to perform so far?

Live Aid at Wembley Stadium in 1985 takes some beating. Three years ago, Spandau performed at the Ancient Greek theatre in Taormina, Sicily. It’s one of the most beautiful stages in the world. The amphitheatre in Verona too. Closer to home there is of course the grade II listed, The Old Market (TOM) in Hove. I’ve been there many times but never performed there and so I’m very much looking forward to playing at this fine, historical venue. This time we are supported with an acoustic set from the band a My Life Story, featuring Brighton resident and dear pal of mine, Jake Shillingford.

You play a ton of instruments, along with other skills such as songwriting, is there one of these that you work best with?

It’s difficult a favourite instrument. Thankfully, I don’t have to. I just get on with it. Jumping from one instrument to the other keeps me on my toes even if I occasionally get it wrong like I did recently when I dived into what should have been a sax solo but with a guitar strapped around my neck. I love it. Warts and all!