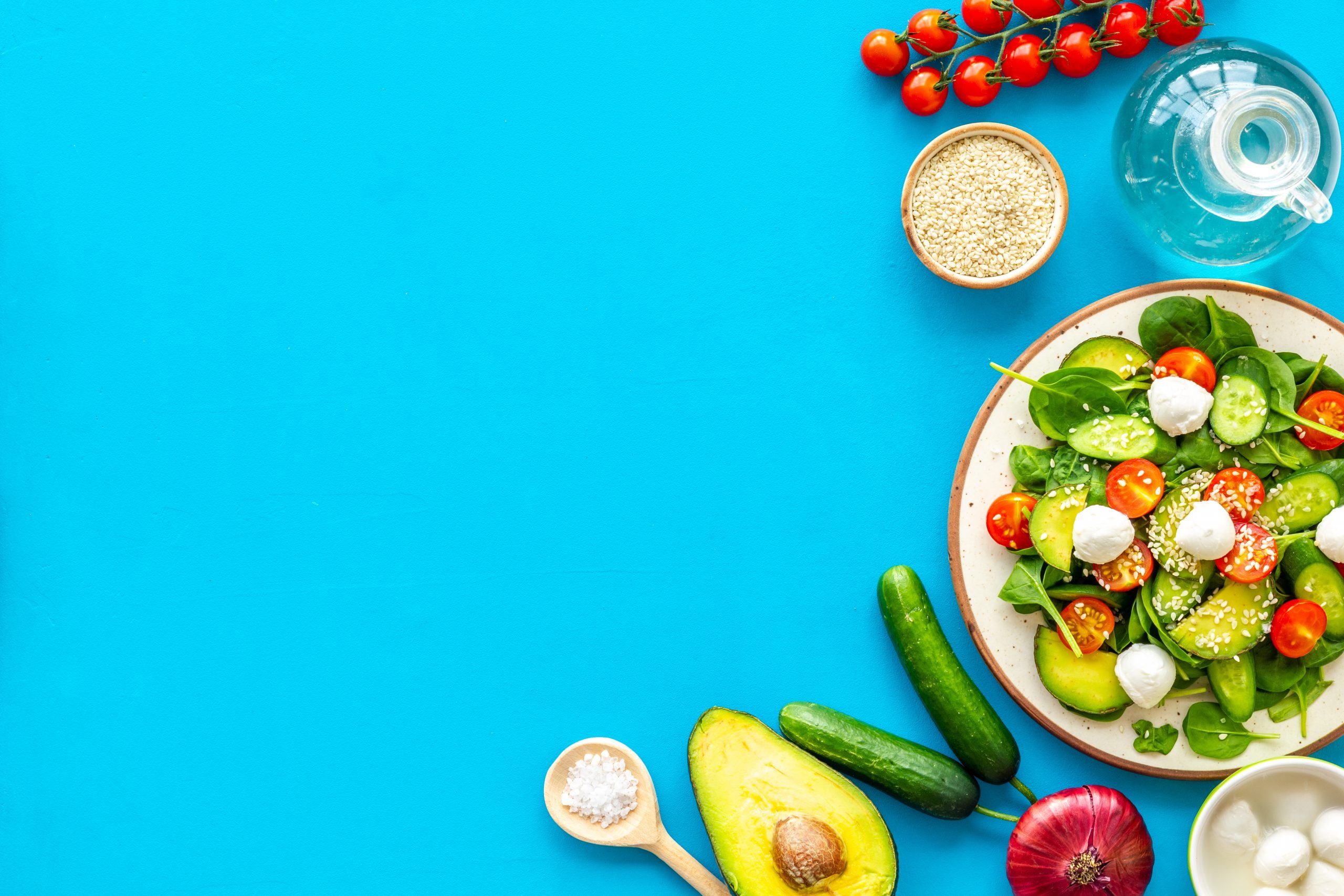 It’s almost time to get our umbrellas out, dig out the coats we thought would be redundant for the next few months, and convince ourselves that the unseasonably bitter wind and accompanying downpour aren’t ruining our day out at the beach: that’s right, it’s summertime! Time for pasty white bodies to be seared a juicy pink; for orange, streaky torsos to be unleashed without warning or invitation upon poor unsuspecting shoppers – yes, we’re a strange lot when it comes to summer, we don’t quite know how to handle it. But one thing we’re pretty good at these days is summer scran.

Gone are the days when summer menus meant salad and only salad. And gone are the days when that salad was half an iceberg, a quartered rock-solid tomato, and some random shapes of cucumber. Apart from anything else, it’s practically written in law now that every meal be at least 30% avocado, and you must photograph your meal from every angle to show it to the absolutely zero people who care, but pretend to so you’ll pretend to care about theirs in return. What a time to be alive!

As far as I’m concerned, there is no finer cuisine than the humble yet princely sandwich. So it seems only right that the first entrant on this collection of summer recipes is essentially a souped-up sanger. There are different ways of creating this masterpiece, each one mouth-watering in its own right. For example, you can create a hasselback version opening up a rustic loaf like a garlic bread and stuffing each three-quarter slice with melted mozzarella, tomatoes, anchovies, pretty much anything you like, so you’re left with a delicious accordion of goodness to sit in the middle of your picnic rug.

But the version we’re going to focus on, is part sandwich, part pie, all delicious. Decapitate a fresh cob loaf, saving the lid, and hollow out the inside, without making the walls too thin. Mix the courgettes and peppers in the oil and cook on a griddle pan for 4-5 mins, until lightly charred and soft. Rub the garlic over the insides of the loaf, then spread the pesto around the inner walls and the lid’s underside.

Blot the grilled veg with paper towel, then simply start filling the loaf-sandwich-pie. Build up layers of veg, cheese, meat, leaves, repeating till full, finishing off with a layer of basil leaves. (You probably don’t need me to say this, but for a vegetarian version, leave the meat out.) The hollow should be well filled. Put the lid back on, wrap it tightly in clingfilm and put something heavy on it to let the flavours fuse together. This can be for a couple of hours or even over night somewhere cool. At the picnic, push the crappy hasselback version that your mate made out the way, and plonk your pièce de resistance down ready to slice up like a cake and make people happy.

Originally known as “Poulet Reine Elizabeth”, this now classic British staple was created for Queen Elizabeth’s coronation lunch. Essentially cold chicken and spicy mayo, this feast is tangy, savoury and sweet all in one. And perhaps the most appealing part is its simplicity to make, and the fact that you can do so ahead of time. You can also serve it in a variety of ways; in a baguette or sandwich, with a leafy salad, in a baked potato, with rice, or just putting your face in the bowl and pigging it straight out.

For the sauce, get a small mixing bowl and add in the mayo, yoghurt, chutney, curry powder, lemon juice and some salt and pepper to taste. You’re half way there.

For the coronation chicken, get a bigger bowl and combine the chicken, spring onions, almonds, sultanas and coriander. Rotisserie chicken is easiest, but if you only have chicken breasts, dice and fry them, and let them cool to room temp before mixing. Equally, if using Quorn pieces, let them get up to room temp first.

The final piece of the puzzle, and you probably saw it coming, add the sauce to the rest and mix evenly. Serve as preferred, ideally on a piping hot sunny day, with your feet dangling in a paddling pool.

The Tuscans. They know what they’re doing. The picturesque vineyards and dreamy, sun-drenched hills have produced the likes of Da Vinci, Michelangelo and Puccini. Amerigo Vespucci, the transatlantic explorer who gave his name to the American continent was born there in 1454. The Ufifizi Gallery, Florence’s world famous il Duomo basilica. The list goes on. Yet they all count for nothing. Tuscany’s true gift to the world is the Panzanella.

This traditional salad is normally made with anchovies, but we’re taking advantage of how flexible this meal is and using artichokes in this version instead. Whatever central ingredient you choose, this meal is one of those that is incredibly easy to make yet looks really impressive on the table.

Pre-heat a dry frying pan and add the almonds, toasting for 4-5 mins until fragrant, then roughly chop and put in a mixing bowl. Pour some olive oil to the still warm pan, tear up the ciabatta into chunks and add to the pan with some sea salt. When lightly coloured and starting to crisp up, remove and add to the almonds in the bowl. Drain the artichokes, keeping the oil, and add them to the pan for 2-3 mins, until warmed through. Add them to the bowl and toss with the parsley and the juice and zest from the ½ lemon. Finally, add in t tbsp of the oil from the artichokes, and season to taste. This can be eaten as a small main, or a light side with meat or fish.

So you can keep your moody Mona Lisa, your hunky statue of David, and whatever La Bohème’s about, next time I’m in Tuscany, just load me up with a pile of Panzanella.

Which restaurants are participating in this year’s OctoberBEST?

Fresh and light, this wonderfully easy meal makes for an ideal summer lunch, supper, snack, midnight feast, elevenses, take your pick. If someone invited you to picture summer on a plate, you’d be hard pressed to bring to mind a more fitting dish than this. So, when the rain’s bouncing down and we’re stuck in our dank homes bemoaning the fact that now we’re allowed outside again last year’s glorious summer is nowhere to be seen, we can at least eat our way into a summery disposition and, however unconvincingly, pretend we’re in Ibiza with a cocktail, about to go out and get messed up.

Cook the edamame beans as you would peas – boil for three mins. Then drain, rinse under cold water and set aside. Get a large salad bowl and mix the juice of the four limes with the sesame oil and sweet chilli sauce until smooth. Then simply add everything else to the bowl and stir through. Add salt and pepper to taste. Now sit back, tuck in, and dream of that piña colada in Sant Antoni… 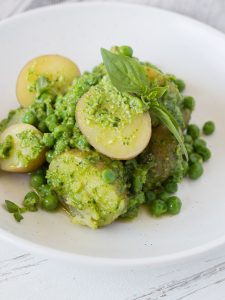 Easy to make ahead of time, this is ideal for a picnic or a fancy packed lunch at work to make your sandwich-scoffing colleagues look like philistines. This is now a regular in our household, although last time I was in charge of it, I royally boned the toasting of the pine nuts, scorching them into black, smoking grit. (Although, to be fair, they were also 18 months out of date, so who’s the real moron here, me or time?) I replaced them by sprinkling over sesame seeds which worked just as well.

Boil your potatoes for 10-15 mins, until soft (or for added crunch, par boil then roast the potatoes). Meanwhile, in a separate pan of boiling water, slowly lower your eggs in to soft or hard boil as you prefer (6-7 mins for soft, 9-10 for hard). When the spuds are done, remove and add the peas to the still-hot water; boil for 3 mins. Then, in a large mixing bowl, combine all the leaves with the potatoes, peas and pesto, toss, and sprinkle over the charred – I mean, perfectly toasted – pine nuts (or reserve sesame seeds), then place halved eggs on top to serve. If you like a bit of spice, add chilli flakes and/or pepper to the eggs. We’ve also had this meal, without the egg, as a side with salmon which, as well as being one of the most middleclass sentences I’ve ever said, worked amazingly well.